Descriptive notes. Head—body 12-18.2 cm (males) and 9-5—-15 cm (females), tail 7.9-8 cm (males) and 6.5-9 cm (females); weight 38-105 g (males) and 33-96 g (females). Mid-dorsal fur of Arlindo’s Shorttailed Opossum is grizzled gray from ears to base oftail and red-washed on rump. Sides of body are reddish. Head has narrow mid-dorsal and mid-rostral bands of pale gray to whitish buff fur and an ill-defined band of red hairs above each eye. There are no eye-rings. Tail length is ¢.60% of head-body length, and tail has reddish fur on 30% of its length dorsally and only at very proximal part ventrally. Naked part of tail is weakly bicolored, brownish dorsally and paler brown ventrally. Ventral fur is grayish-cream to yellowish, with gray-based hairs, sharply contrasting with reddish body sides, and is distinctly reddish on throat and chin. Fur is longer and denser dorsally (¢.8 mm) and shorter ventrally (c.4 mm). Feet are brown or gray, and ears are small, uniformly brownish, and appear naked. Females lack a pouch, but number of mammae has not been reported. Arlindo’s Short-tailed Opossum has a 2n = 18, FN = 30 karyotype, with an acrocentric X-chromosome and a minute Y-chromosome. There is some geographical variation in the extent of fur on tail and fur tonality. Males are larger than females.

Status and Conservation. Arlindo’s Short-tailed Opossum has not been assessed as a distinct species on The IUCN Red List because at the time of the last assessment, it was considered to be a conspecific with the Guyanan Short-tailed Opossum ( Monodelphis brevicaudata   ). Conservation status of all opossumsis being reassessed by the IUCN New World Marsupial Specialists Group. 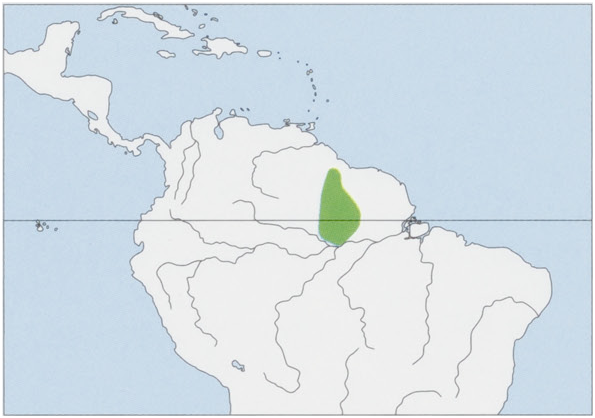