The species has been treated as monotypic, but recent phylogenetic analyses based on mtDNA sequences show that itis in fact composed of two clades representing two evolutionary units, one from the cerrado and the Pantanal and one from the caatinga. Formal definition and description of these two taxa are pending. Monotypic.

Descriptive notes. Head-body 12:3-17.9 cm, tail 4:6.9-6 cm; weight 58-110 g. The Gray Short-tailed Opossum is now widely used as a laboratory animal. More than 80,000 individuals have been produced from a single colony of 2000 individuals and used either directly or as founders of additional colonies. As a consequence, there are measurements and weights in the literature that differ from those of wild individuals; some captive males have been reported to have a head-body length of up to 20 cm and weigh up to 150 g. The Gray Short-tailed Opossum is clearly distinct from almost all other species in the genus because its dorsal fur is uniformly grayish to gray-brown, and paler with yellowish tinges on cheeks and body sides. Head is the same color as dorsum and does not have a mid-rostral stripe or eye-rings. Tail length is ¢.50-55% of head-body length, tail has fur on proximal 10 mm or more, and naked rest oftail is dark brown dorsally and paler ventrally and at tip. Ventralfur is pale, gray-based, gray to buff with an orange tinge up to chin and no contrast with sides of body or dorsum. Fur is short, dense, and smooth. Feet are pinkish or whitish, and ears are small, uniformly colored grayish, and appear naked. Females lack a pouch, and 13 mammae are present, six on each side and a medial mamma. Throat gland is present in males and has a well-documented role in reproductive behavior. The Gray Short-tailed Opossum has a 2n = 18 karyotype, with a variable FN, with a small acrocentric X-chromosome and a minute acrocentric Y-chromosome (sometimes described as submetacentric, metacentric, or dotlike). Variation in FN ranges from FN = 20 in specimens from Goias, Brazil, FN = 22 in Pernambuco and Bahia, FN = 24 in Bolivia, FN = 28 in Goias, and FN = 30 in Espirito Santo, Brazil, and unspecified Brazilian localities. Males are larger than females; females stop growing when they reach sexual maturity, whereas males continue to grow. Skull size is sexually dimorphic. The Gray Short-tailed Opossum is the only opossum that has had its whole genome sequenced and published.

Habitat. Usually a wide variety of xeric habitats. Distribution of the Gray Short-tailed Opossum coincides with the South American diagonal of open and drier habitats that occurs from the Brazilian caatinga, through the cerrado, and into the Chaco of northern Argentina (including eastern Bolivia and northern Paraguay), but also in Pantanal, Campos, and Amazonian localities. Gray Short-tailed Opossums are therefore usually associated with more open vegetation. In the caatinga, they are found in most habitats, including low thorn scrub, high thorn scrub, cultivated and abandoned fields, and granitic outcrops. In the cerrado, they have been found in gallery forests, semi-deciduous forests, cerrado sensu stricto, wet grasslands, and rocky cerrado. In the Paraguayan Chaco, Gray Short-tailed Opossums occur in cerrado woodland, subhumid forest, cerrado scrub, and Chaco woodland. Nevertheless, they seem to avoid open pastures and even grasslands, preferring some level of vegetative cover.

Food and Feeding. Gray Short-tailed Opossums feed mainly on invertebrates, mostly insects, but their diet may also include small vertebrates and fruits. Seeds of Cipocereus minensis ( Cactaceae ) and carrion were found in its feces in an area of montane savanna in Brazil. Captive individuals were offered and readily attacked, killed, and ate a variety of small vertebrates, including snakes and lizards that were up to 75% of their own weight. Consumption of a rodent of the genus Calomys weighing about one-third of the opossum’s weight has been observed directly in the field. Gray Short-tailed Opossums catch small ants and flying insects with their forepaws. They even prey on scorpions, first pinning the scorpion to the ground, biting off the last tail segments before eating it. Nutritional contents of their preferred diets were determined with cafeteria experiments in captivity where individuals were free to choose food items according to their needs. They consumed 4-4 g of proteins, 2 g of carbohydrates, 0-88 g of lipids, and 1% offibers per 100 g of dry matter. Colonies of the Gray Short-tailed Opossum bred as laboratory individuals have been maintained successfully for generations with commercial fox food pellets, sometimes supplemented with mealworms and fruit.

Activity patterns. Unlike several other species in the genus that have been reported to have diurnal activity, the Gray Short-tailed Opossum is apparently mostly nocturnal or crepuscular, with most activity during the first 1-3 hours after dusk and additional shorter active periods during the night.

Movements, Home range and Social organization. The Gray Short-tailed Opossum is ground dwelling, always captured in traps set at ground level. Nevertheless,it is worth noting that captured and released individuals have been seen fleeing and climbing trees up to 3 m. Gray Short-tailed Opossums are solitary and highly intolerant of other individuals, with social interactions limited to the mating period. Home ranges in the caatinga have been estimated at 0-12 ha for males and 0-18 ha for females, and density is estimated at 400 ind/km?. In a cerrado patch in Paraguay, average maximum distance traveled was 46-5 m.

Status and Conservation. Classified as Least Concern on The IUCN Red List. The Gray Short-tailed Opossum is widely distributed and has a presumably large overall population. It occurs in several protected areas, and it is quite tolerant of habitat modification. 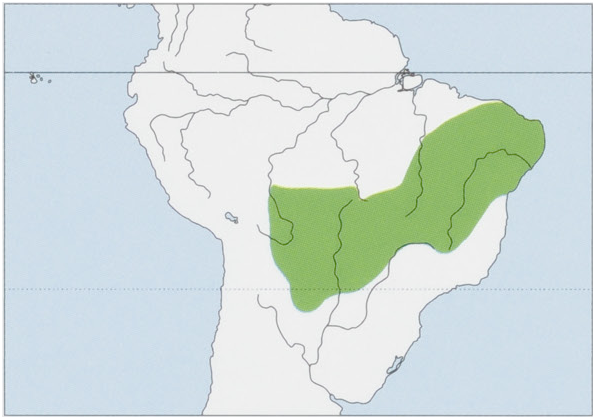