Previously considered to include M. peruviana but it 1s now considered a distinct species. Monotypic.

Dorsal fur of the Sepia Short-tailed Opossum is brownish to dark brown, with a darker area on rump and posterior dorsum that is not clearly separated from remaining fur. Head is similarly colored, without a mid-rostral stripe or eye-rings. Tail length is ¢.60% of head-body length, and tail is naked and uniformly colored dark brown to blackish. Ventral and throat fur is conspicuously paler than that of dorsum, dark gray or orange gray, sometimes with a mid-ventral cream or white stripe, which may or may not be conspicuous. Fur is short (3 mm) and velvety. Feet are fuscous, blackish or dark brown, and ears are naked and colored dark brown-gray. Female Sepia Short-tailed Opossums lack a pouch, but number of mammae and karyotype are unknown. There is no sexual dimorphism in skull size and shape.

Habitat. Mostly montane, most frequently found in mid-elevations forests (1400-2200 m) but also as low as 200 m in rainforest, floodplain forest, or wet grassland habitats. Sepia Short-tailed Opossums have been trapped in transition areas between humid cloud and rainforests, and more specifically under rocks or logs, near riverbanks, and in association with cultivated land (banana, yucca, and maize), pastures, and even inside houses.

Food and Feeding. The little information available on stomach contents of a few Sepia Short-tailed Opossums indicates a diet of insects, specifically adults and larvae of beetles, but a small frog and vegetation have also been found in stomachs.

Breeding. Sepia Short-tailed Opossums have been reported to den in tree holes. A female trapped in August had four suckling young.

Activity patterns. There is no specific information for this species, but Sepia Shorttailed Opossums are likely nocturnal.

Status and Conservation. Classified as Least Concern on The IUCN Red List. The Sepia Short-tailed Opossum has a wide distribution and presumably a large population; it occurs in several protected areas and has some degree of tolerance for habitat modification. Overall population of the Sepia Short-tailed Opossum is unlikely to be declining at nearly the rate required to qualify for IUCN classification in a threatened category. 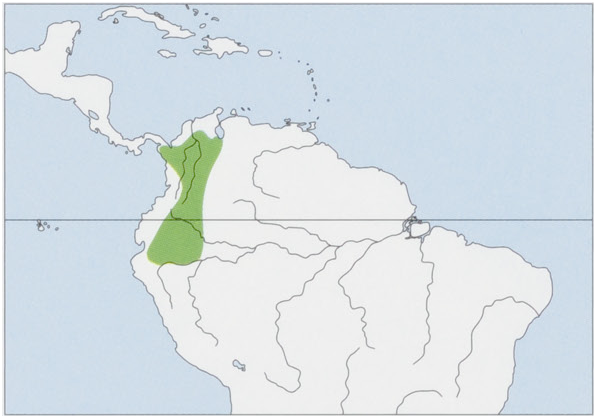