Descriptive notes. Head-body 12-4 cm, tail 6-8 cm (holotype); or head-body 12-3 cm, tail 6-9 cm (mean of five additional paratypes); weight 45-5-65 g. Dorsal fur of Handley’s Short-tailed Opossum is brownish, composed of gray-based buffy or brown hairs, and lacks any marked dorsal stripe or reddish or yellowish color on sides of body, although a faint darker midline is visible on only the holotype. Brownish fur extends onto head, which has no mid-rostralstripe or eye-rings. Tail length is ¢.55% of head-body length, and tail has fur on less than 5 mm dorsally and 8-10 mm ventrally. Naked part oftail is uncolored dark fuscous. Ventral fur is dull cream from chin to anus, with a conspicuous paler mid-ventral stripe that is wider on abdominal region. Fur is less than 5 mm. Feet are brownish. Female Handley’s Short-tailed Opossums probably lack a pouch, but no females have been collected, so number of mammae is unknown. Karyotype is unknown.

Habitat. Swampy and well-drained forests bordering primary and secondary forests, usually with some degree of disturbance (selective logging and exploitation), in areas with canopies of 25-30 m and dense understories with abundant palms.

Movements, Home range and Social organization. Based on collecting information available from existing specimens, Handley’s Short-tailed Opossum is ground dwelling, having been trapped in snap traps set on the ground or in pitfall traps. 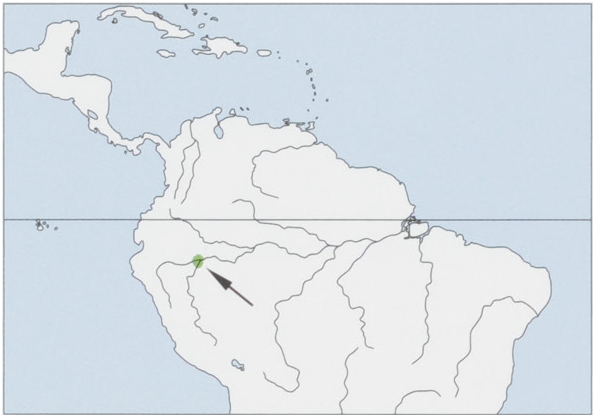 Distribution. NE Peru (between the Ucayali and Javary rivers in Requena, Loreto).