type locality not given. Restricted by A. Cabrera in 1958 to “ Asuncion,” Paraguay.

Descriptive notes. Head—body 24.3-40 cm, tail 24.5-35.8 cm; weight 200-910 g. Dorsal fur in the Big Lutrine Opossum is uniformly colored, varying from buffy yellow to buffy or dark brown. Head lacks any sort of marking such as mid-rostral stripe, eye-rings, or supraocular spots. Rostrum is short, particularly compared with that of the other bigbodied species of opossums. Tail is thick, measures ¢.95% of head-body length, and is thickly furred from base up to one-half of its length. Rest oftail is all brown to black for three-fourths to four-fifths ofits length, and pale yellowish to white on distal end. Ventral furis paler than dorsal fur, varying from reddish-ocher to pale or dark brown. Variations offur color may occur in a single locality, as well as in a single individual, depending on diet and environmental conditions. Fur is soft and dense, although not water-repellent. Legs are short and stout and, combined with the proportionally long body, give it an otter-like appearance that led to its scientific and common names. Ears are brown, short, rounded, and barely extend above fur, and eyes are dark brown. Females have a pouch that opens backward, with 9-11 mammae, four or five on each side and an additional a medial mamma. The Big Lutrine Opossum has a 2n = 22, FN = 20 karyotype, with all acrocentric autosomes, and with a metacentric X-chromosome and an acrocentric Y-chromosome. Males are larger than females, and skull size and shape are sexually dimorphic.

Habitat. Near water in wet savannas near forests in its northern distribution and in humid forests along watercourses, wet grasslands, and savanna woodland habitats in its southern distribution. In central Argentina, Uruguay, and southern Brazil, Big Lutrine Opossums occur in pampas, temperate grasslands, and marshy or riparian habitats; in northern Argentina and Paraguay, they occupy more mesic savanna woodlands of the Chaco; and in Mato Grosso, Brazil, they occur in tropical grassland and gallery woodland habitats. In Venezuela, Big Lutrine Opossums have been captured in grasslands with grasses 0-5—1-5 m high near streams, but also in dry pastures. They also occurs in anthropic areas and secondary forest in the Atlantic Forest biome.

Food and Feeding. The Big Lutrine Opossum is considered one of the most carnivorous species of opossums, based not only on diet analyses but also its particularly fierce and aggressive behavior and skull morphology. It has a unique short rostrum and very well developed masticatory muscles. It feeds on a wide variety of vertebrate prey items, such as rodents, small species of opossums, Tapetis ( Sylvilagus brasiliensis, Leporidae ), birds, frogs, lizards, snakes (including venomous snakes such as pit vipers to which it is immune), and fish. It also feeds on several invertebrate groups, such as arthropods (Decapoda, Coeloptera, Isoptera, Hymenoptera, Orthoptera, and Opiliones), earthworms, snails, and crustaceans. Fruits are also occasionally consumed, mostly during warmer and rainy months; seeds have been found in fecal or stomach contents. Although seen as more carnivorous that most other species of opossums, in some studies, seeds were found more frequently than animal items. There are also reports of occasional consumption of carrion and human food waste. Nutritional contents of preferred diets, determined with cafeteria experiments in captivity where individuals were free to choose food items according to their needs, resulted in 27-5 g of proteins, 16-3 g of carbohydrates, 7-2 g of lipids, and 1-6% offibers per 100 g of dry matter.

Breeding. The Big Lutrine Opossum makes globular nests with dry grasses in tree holes and abandoned burrows, or on the ground in grasslands. Spherical nests (10-30 cm) were observed hanging c.30 cm above the water, attached to reeds. Reported litter size varies from seven to eleven young. Mean litter size in south-eastern Brazil is 8:7 young. In Argentina, litters range from seven to eleven young, with a mean of 8:6 young, and a female from Colombia was captured with seven pouch young. Timing of breeding season seems to vary geographically. In the southern limit of its distribution near Buenos Aires, breeding season was estimated to be from September to April, although one female with pouch young was captured in winter and a female with pouch young was recorded in October in Corrientes. During this season, female Big Lutrine Opossums are apparently able to produce two litters. At the same latitude, another study recorded reproductively active females in spring and summer, and a single case in winter, with estimated birth dates in September—February. In southern Brazil, a reproductively active female was captured in January and recaptured in February, and in south-eastern Brazil, reproductively active females were captured in June—-October. In Colombia, a female with pouch young was captured in August.

Activity patterns. There is no specific information for this species, but the Big Lutrine Opossum is nocturnal.

Movements, Home range and Social organization. Although the long body and short legs suggest ground-based habits, Big Lutrine Opossums are actually good climbers and swimmers. They are usually associated with marshy habitats and have been seen swimming or assumed to have swam. They have been captured in traps set in floating vegetation and seen inside duck nests in middle of a swamp. Fleeing individuals dove and swam away. A captive Big Lutrine Opossum swam at 1-4 km/h, with a four-footed paddling gait and, with positive buoyancy, its back parallel to the water surface. On land, they use diagonal trot a lower speeds and a gallop at higher speeds, moving on average at 3-6 km/h. A similar gait was observed on horizontal tubes simulating arboreal locomotion. They bounded up steeper supports, holding on with both forefeet, while advancing hindfeet and then holding the support with hindfeet to advance forefeet. They also jumped at the end of supports. Big Lutrine Opossums raised in outdoor enclosures climbed trees, and one individual repeatedly used its thick tail like a spring as itjumped almost 60 cm vertically when attacking the observer. Estimates of distances traveled are 20-250 m. Home ranges in southern Brazil measured 0-65 ha for a single male and 0-81 ha for a single female. Density is 200 ind/km? in Santa Catarina, Brazil.

Status and Conservation. Classified as Least Concern on The IUCN Red List. The Big Lutrine Opossum has a wide distribution and presumably a large population, and it occurs in several protected areas. In the southern limits ofits distribution, draining of wetlands for agriculture may ultimately affect conservation status of the Big Lutrine Opossum. 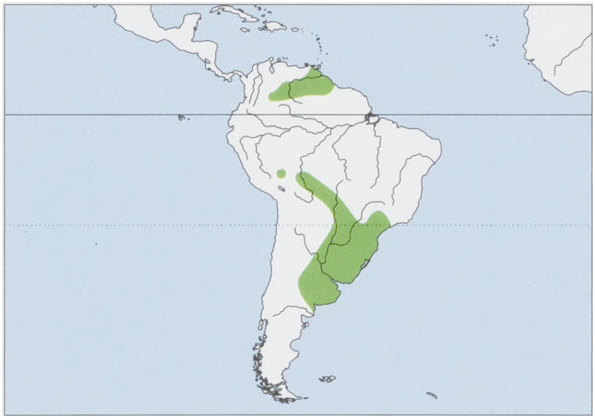