Descriptive notes. Head—body 37-50.1 cm,tail 29.5-47 cm; weight 0.5-5.9 kg. Male Virginia Opossums are larger than females (average weights are c.2-8 kg for males and c.1-9 kg for females), and there is sexual dimorphism in skull shape. Gray dorsal fur consists of two distinct layers: dense underfur with white-based dark brown to black hairs visible underneath long, coarse guard hairs. Guard hairs can be all white, resulting in what is called a gray phase, or black-tipped, resulting in a black phase. Top of head is same color as dorsal fur, narrowing into a pointed stripe between eyes, and there is a faint, grayish to dusky eye mask from nose almost to bases of ears. Cheeks are white. Mid-rostral stripe and eye mask are more conspicuous in the black phase and may not be visible in the gray phase. Tail length is about the same as head-body length. Tail is furred at base; about one-half of naked part is black, and remainder can be dirty white, fleshy, or completely black. Ventralfur is similar to but paler than dorsal fur. Distal ends of limbs are black, feet are black with white toes, and ears are large and black with white tips. There is considerable variation in coloration; some specimens have completely white faces, white forefeet, and mostly white tails, and others have black ears and hindfeet. Females have a pouch, usually with 13 mammae,five or six on each side and a medial mamma; number can vary from nine to 17. The Virginia Opossum has 2n = 22, FN = 32 karyotype, with six pairs of biarmed and four pairs of acrocentric autosomes, with a metacentric or submetacentric X-chromosome and an acrocentric Y-chromosome.

Habitat. Almost every habitat within its distribution from sea level to elevations of more than 3000 m and from areas of relatively high aridity to much more mesic environments. Nevertheless, the Virginia Opossum seems prefer wet areas, near swamps and streams. It can be found in marshlands and a variety of forested, grassland, agricultural, and suburban habitats, being tolerant of human presence and habitat modification. It even shows a preference for developed areas, and densities in cities are sometimes higher than in rural areas.

Food and Feeding. The Virginia Opossum is a highly opportunistic and generalist species, with a diet based on insects and carrion but also including fruits and grains. Some of the reported small vertebrates in their diets include rodents such as mice, cotton rats, voles, and squirrels. They also prey on skunks, rabbits, shrews, and moles and will eat birds, bird eggs, and nestlings, including yellow-bellied sapsuckers (Sphyrapicus varius), mourning doves (Zenaida macroura), and spotted towhees (Pipilo maculatus), as well as chickens, pheasants, and a variety of amphibians and reptiles, including frogs, toads, salamanders, and snakes, even poisonous copperheads. Invertebrates consumed include caterpillars and other insects, snails, slugs, and earthworms. Food items of vegetal origin include grass, corn, chestnuts, acorns, buckwheat, small tubers, young briar shoots, blackberries, wild cherries, mulberries, hackberries, persimmons, pears, watermelons, and grapes. Most diet studies of Virginia Opossumsindicate that food items are consumed based mostly on their availability (more abundant items are used). They also raid garbage bins.

Breeding. Female Virginia Opossums make nests with dead leaves in a variety of places such as tree cavities, hollow logs, and burrows. They also use abandoned nests of crows, squirrels, skunks, armadillos, and woodchucks, which they modify by adding material. Nest-building materialis carried with the tail and put in place with the mouth and forefeet. A nest consists of a circular wall of material 10-25 cm high and 10-35 cm thick. It may be covered with straw in very cold temperatures. The Virginia Opossum reaches sexual maturity at c¢.6 months of age, and estrous cycle lasts 22-38 days, averaging 29-5 days. Premating behavior includes clicking sounds by males and attempts to nuzzle and sniff the female cloaca, but anestrous females are not receptive and respond by growling, hissing, and biting, which is usually followed by submissive behavior by males. During mating, the male grasps a receptive estrous female by her hindlegs with his hindfeet and holds her with a bite on the neck. Coupling may last up to c.2 hours. Gestation lasts 12-13 days. Young are born weighing c.0-15 g and measuring c.14 mm from crown to rump. They remain permanently attached to mammae for up to 48-65 days. After that, they continue to suckle until weaning at 95-105 days. Litter size is variable, with as many as 17-21 young in a single litter. Apparently populations from the northern part of the distribution tend to have largerlitters. Mean litter sizes in USA populations vary from an average of 6-3 young in Florida to ten young in California. Mexican populations have an average litter size of 7-6 young. Usually two litters are produced during the breeding season, although three litters have occasionally been reported. Breeding season usually extends from January to November but may be shorter in the northern part of the distribution, where, due to harsher winter conditions, breeding occurs only from March to September.

Activity patterns. Virginia Opossums are usually strictly nocturnal. Their activity starts soon after dusk and continues until dawn, but peak activity is concentrated between 23:00 h and 02:00 h. They may be active during the day in winter in the colder parts of their distribution, where extremely low night temperatures force them into diurnal activity. Whether sexes or ages have different preferred activity times varies from one study or study site to another; some have found that females are active earlier than males, and juveniles earlier than adults, but others have found no difference between these groups.

Movements, Home range and Social organization. Virginia Opossums can walk long distances. Their walking speed has been estimated at 0-4-1-8 km/h, and maximum running speed has been estimated to be 7-6 km/h. They are also are good climbers, sometimes using their prehensile tails as additional support, and dens are sometimes made in trees. They also swim in natural conditions, including underwater swimming. Maximum swimming speed is c¢.1-1 km/h, and Virginia Opossums can swim distances up to 100 m relatively easily. Two swimming gaits are known: one similar to terrestrial walking and another with the limbs on each side moving simultaneously. Some fleeing individuals have been seen swimming underwater, including a female later captured and found to have pouch young and the ability to tightly seal the pouch opening when diving. Virginia Opossums usually travel from ¢.600 m to 1 km per night, although nightly movements of up to 9 km have been recorded for males searching for females during the breeding season. They use a mean radius of 680 m around their dens when foraging but usually stay closer than that. How much area is used around densis related to age; younger individuals stay closer to the den. Estimated home ranges for the Virginia Opossum vary widely, from as low as 4 ha to as much as 800 ha. In some areas, males increase their nightly movement rate and double their home ranges during breeding seasons, and these larger home ranges can overlap home ranges of 1-6 females. Estimated densities of the Virginia Opossum vary from 0-9 ind/km? to 250 ind/km?®. Communications consist of sounds used in agonistic situations by most species of opossums, including hissing, screeching, and growling. Social interactions are extremely rare. Virginia Opossums usually den alone, but females or occasionally a male and female may share the same den. They stay on average 2-2 days in each den, and other individuals frequently use abandoned dens. Up to five Virginia Opossums have been recorded using the same den (although not simultaneously), especially in more favorable areas. Occasionally two opossums share a den at the same time, but no interactions have been recorded in those cases. In Florida, males were seen following females into their dens after mating and sharing that den during daytime. When several individuals are seen sharing a den, they are usually recently weaned littermates, who may share a den for a few days to weeks. Nevertheless, captive Virginia Opossums in semi-natural enclosures sometimes exhibit communal denning. Their interactions are more likely to be neutral or affiliative than agonistic. These captive individuals were able to form stable, hierarchical social relationships, unlike field observations reported for other species of the genus. Agonistic behavior observed between males in the field occurred during the breeding season when they competed for a single female. A typical behavior of the Virginia Opossum is thanatosis, or feigning death, a behavior not found in any other species of opossum. When they are “playing possum,” they remain motionless, with the mouth open, and lie with body and tail curled. This can be brief, lasting less than a minute, or can last as long as c.6 hours. It involves “apparent death” with physiological changes: body temperature drops, heart rate drops almost 50%, and breathing rate drops ¢.30%. Consciousness, however, remains unaltered; brain activity and electrocardiogram patterns in individuals playing possum are identical to those of individuals during their normal activities.

Status and Conservation. Classified as Least Concern on The IUCN Red List. The Virginia Opossum is a widespread and common species throughout its distribution and is highly adaptable to human-dominated landscapes. It has been hunted or trapped for food, sport, and as predators of poultry, but this does not seem to represent a conservation threat. On the contrary, distribution of the Virginia Opossum has been expanding northward ever since the North American continent began to be colonized by Europeans. 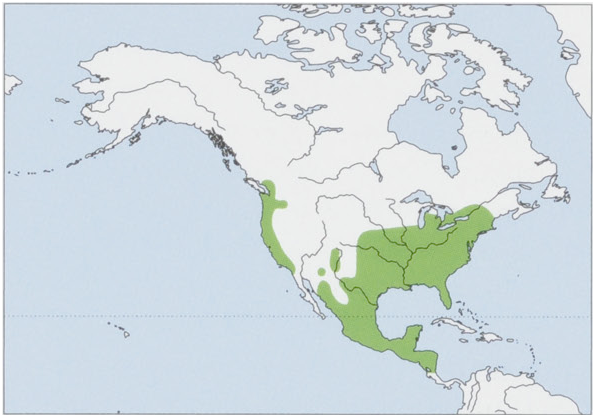