Descriptive notes. Head-body 26.5-32.7 cm, tail 25.3-32.6 cm; weight 220-910 g. Dorsal fur and body sides of the South-eastern Four-eyed Opossum are dark gray, and there is no mid-dorsal stripe. Head is dark gray, with small creamywhite supraocular spots. Tail length is about the same as head-body length; tail has fur on proximal 17% ofits length and is whitish on distal one-third of its naked part. Ventral fur is creamy-gray to white, gray-based on throat, and there is a narrow ventral strip of cream to whitish fur. Furis short, dense, and smooth. Feet are reddish-brown or dark gray, and ears are large and pinkish, with blackish borders and undefined creamy white fur at their bases. Females have a complete pouch that opens forward, with 5-9 mammae, 2—4 on each side and a medial mamma. The South-eastern Foureyed Opossum has a 2n = 22, FN = 20 karyotype, with all acrocentric autosomes, an acrocentric X-chromosome and a minute Y-chromosome. Skull size and shape are sexually dimorphic.

Food and Feeding. Diet of the South-eastern Four-eyed Opossum has been well studied at a number ofsites, mainly in south-eastern Brazil. It feeds mainly on arthropods and small vertebrates, supplementing its diet with fruits. In a restinga forest in southeastern Brazil, it most frequently consumed Coleoptera, Hymenoptera, and Arachnida, followed by Diplopoda, Diptera , Isoptera , Orthoptera, Blattodea , and Hemiptera. Vertebrate taxa consumed included rodents such as the Cursorial Akodont (Akodon cursor), lizards (Ameiva and Tropidurus), skinks (Mabuya), and birds. Fruits of ¢.30 types, such as Anthurium ( Araceae ), Achmaea ( Bromeliaceae ), Erythroxylum ( Erythroxylaceae ), Passiflora ( Passifloraceae ), Paulinia ( Sapindaceae ), and Pilosocereus ( Cactaceae ), are consumed more frequently during drier months, probably as a water supplement. Its diet in a rural area in the mountains near Rio de Janeiro is also composed of arthropods, vertebrates, and fruits, but in this more mesic habitat, fruits are consumed according to availabilities and not related to precipitation. In another lowland Atlantic Forest site, still in Rio de Janeiro, its diet included Coleoptera, Hymenoptera, Arachnida, Diptera , unidentified rodents, and seeds ( Piper , Piperaceae ) in one study. Another study reported arthropods in 85:7% of the fecal samples and vertebrates in 25-7% of them, including Ingram’s Squirrels (Sciurus aestuans ingrami), forest rats (Delomys), hocicudos (Oxymycterus), short-tailed opossums ( Monodelphis ), and an unidentified species of primate. There were seeds in 65-7% of the fecal samples, with 13 morphotypes, including families Melastomataceae , Moraceae , Piperaceae , and Poligonaceae . In southern Brazil, South-eastern Four-eyed Opossums feed mostly on invertebrates, which were found in all fecal samples analyzed. Vertebrate remains were recorded in c.50% and seeds in ¢.29% of samples. Consumed invertebrates included Coleoptera, Opiliones, Diplopoda, Blattodea, Hymenoptera (ants), snails, Orthoptera, and Decapoda. Vertebrates recorded included unidentified birds, mammals, and lizards, and there were seeds of Monstera adansonii ( Araceae ), Ficus luschnathiana ( Moraceae ), and other unidentified Solanaceae . Nutritional contents of preferred diets, determined with cafeteria experiments in captivity where individuals were free to choose food items according to their needs, resulted in 10-6 g of proteins, 11-5 g of carbohydrates, 2-3 g of lipids, and 1-8% offibers per 100 g of dry matter.

Breeding. Female South-eastern Four-eyed Opossums make nests under trees, with entrance tunnels, but they also nest as high as 8-10 m in hollow trees or tree forks. Captive individuals had a gestation of 13-14 days, and females exhibited post-lactation estrus but no sign of male-induced estrus. Weaning occurred at 70-80 days. Mean litter size in captivity was 5-5 young. Reported littersizes in the wild were 1-8 young, with a modal number of eight young in an Atlantic Forestssite, 5-7 (5-7 young) in another Atlantic Forest site, and 4-5 in yet another Atlantic Forestsite (with a maximum of seven young recorded). Mean of 5-3 young/litter was recorded in a restinga forest. Breeding season lasted from July or August to April at several study sites in Rio de Janeiro (both rural Atlantic Forest sites) and July—-February in a restinga forest. In another Atlantic Forest site in Rio de Janeiro, reproductive females were found throughout the year, and their occurrence was not linked to rainfall. Breeding season is September—February in Minas Gerais and August-February in Misiones, Argentina.

Activity patterns. There is no specific information available for this species, but the South-eastern Four-eyed Opossum is reported to be nocturnal.

Movements, Home range and Social organization. South-eastern Four-eyed Opossums move mostly on the ground, but they climb well, and when they do, they mostly use understory, as determined by spool-and-line tracking. They can jump across gaps and may locate nests as high as 10 m. Estimated home ranges vary widely, depending on method used, from an average of 0-4 ha to up to 12 ha. In the same or nearby sites in lowland Atlantic Forest in Rio de Janeiro, home range of the South-eastern Four-eyed Opossum averaged 2-8 ha (range 0-6-7-4 ha) using radio-telemetry or 2 ha (0-1-12-1 ha) using capture-mark-recapture with multiple grids. Nevertheless, mean estimates of home ranges using a single grid were much lower: 0-4 ha (0-12-1 ha) was reported in a restinga forest in Rio de Janeiro, 0-4 ha (0-14-0-64 ha) in an Atlantic Forest site in Sao Paulo, and 0-67 ha in an Atlantic Forestsite in Rio de Janeiro. In a restinga forest, densities were 191 ind/km?®. Perceptual range of the South-eastern Four-eyed Opossum (maximum distance at which they can detect a landscape element) is 100 m, based on abilities of individuals released in a grass matrix to detect and head for forest fragments from which they had been removed; however, this distance depends on vegetation obstruction and decreases to 50 m in tall grass (c.50 cm) and 30 m in plantations. South-eastern Four-eyed Opossums can use low grass matrix to move between fragments and showed homing behavior, choosing to return to the fragment from which they were collected, even if it was farther away than other fragments. In a restinga forest, the most frequent movements were less than 30 m, with occasional movements of up to 300 m. Estimates using spool-and-line devices in the Atlantic Forest of south-eastern Brazil yielded similar values, with distances between successive captures of 20-83 m and maximum distances traveled of 156 m.

Status and Conservation. Classified as Least Concern on The IUCN Red List. The Southeastern Four-eyed Opossum has a wide distribution and presumably a large overall population; it occurs in several protected areas and is tolerant of various levels of habitat modification. Although it requires forested habitat, it seems to tolerate some level of fragmentation fairly well because populations living in Atlantic Forest fragments in south-eastern Brazil use edge and interiors of fragments and forage in surrounding matrices or move across fragments. 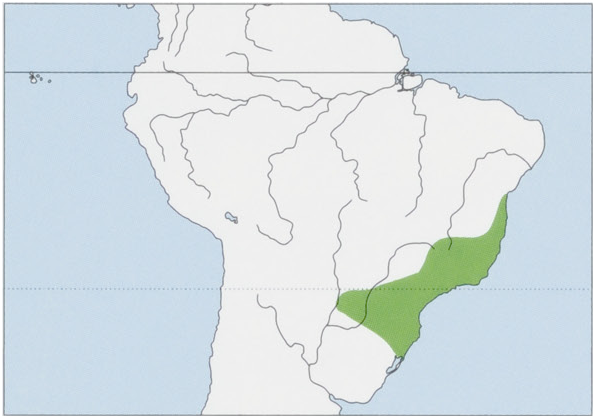