Descriptive notes. Head-body 31.7-39 cm, tail 30-41 cm; weight 0.6-1.2 kg. Skull size and shape of the Guianan Whiteeared Opossum are sexually dimorphic, although they vary with samples analyzed. Its dorsalfur is gray to blackish, consisting of two distinct layers: yellowish-white underfur underneath long, coarse guard hairs that can be either black basally, with most of their length white, sometimes with black tip (resulting in a gray phase), or entirely lustrous black (resulting in a black phase). Head is pale gray, whitish, or yellowish, with narrow dark brown mask from nose to near bases of ears. Mask of the Guianan White-eared Opossum is not as contrasting as that of the Brazilian White-eared Opossum ( Didelphis albrventris) due to a dirtier shade of head and cheek fur. Well-developed black line on center of forehead, narrowing to a point at the level in between eyes, is more distinct in specimens of the gray phase. Tail length is about the same as head-body length or slightly shorter, and tail is basally furred for about one-third of its length. Naked twothirds oftail is black on proximal end,slightly past furred part, and yellowish-white on rest. Ventral fur and body sides are dirty white, with yellowish underfur from chin to chest. Forelimbs and hindlimbs, including hands and feet, are black. Ears are large and black with white tips and bases, but they can be completely white in young specimens. Females have a pouch, but number of mammae is unknown. Karyotype of the Guianan White-eared Opossum is unknown.

Habitat. Tropical, subtropical, and temperate evergreen rainforests at elevations of 100-2200 m. In Venezuela, Guianan White-eared Opossums occur in elfin forest habitats on tepuis but also in lowland forests in eastern Venezuela and French Guiana, where they occur in primary forests, disturbed forests, and forest edges. In Brazil, they were found in terra firma forest, flooded fields, and savannas.

Breeding. In French Guiana, breeding female Guianan White-eared Opossums were captured in every month except November, but they were more abundant in December-May. Meanlittersize is 4-9 young, ranging from one to seven young. There are no chronological or dental age classes reported for onset of reproduction, but younger and smallest reproductively active females found in French Guiana weighed c.440 g.

Activity patterns. There is no specific information available for this species, but the Guianan White-eared Opossum is probably nocturnal.

Movements, Home range and Social organization. In some studies in French Guiana, the Guianan White-eared Opossum was reported to be ground dwelling, but more recent studies using traps at ground and understory levels found that it used both layers equally.

Status and Conservation. Classified as Least Concern on The IUCN Red List. The Guianan White-eared Opossum has a widespread distribution, occurs in protected areas, and presumably has large overall population. 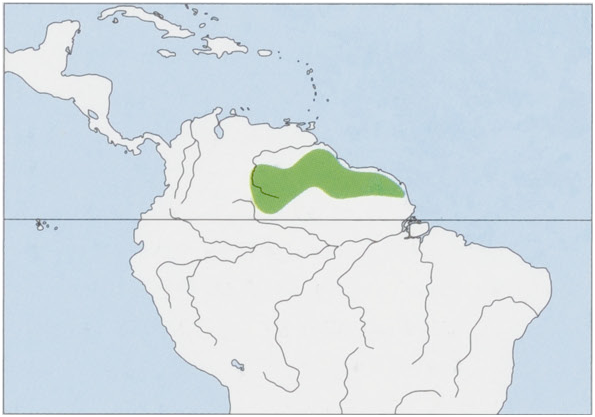