Descriptive notes. Head-body 34-44 cm, tail 32-41.2 cm; weight 0-72.2 kg. Skull shape of the Andean White-eared Opossum is sexually dimorphic. Its dorsal fur, except for head,is intense shiny black, with two distinct layers: soft woolly underfur consisting of pale yellowish-white hairs (on their basal one-half) with black tips, under abundant long, not very stiff, entirely black guard hairs. White part of underfur is concealed underneath dense black outer coat. Head is white, with a clearly marked black eye mask from nose through a little behind eyes, and then continuing to bases of ears as an ill-defined dusky line. Cheeks are rusty buff or white, and there is a black line on center of forehead, narrowing to a point between eyes. Tail length is about the same as head-body length or slightly shorter, and tail is basally furred, black on proximal two-fifths to three-fifths, and white on rest. Ventral fur is buffy white, with black-tipped hairs; throat is rusty buff. Feet are black, and ears are large, entirely pinkish-white in living individuals (yellowish-white in dried skins), contrasting sharply with black dorsal fur. Females have a pouch, but number of mammae is unknown. The Andean White-eared Opossum has a 2n = 22, FN = 20 karyotype, with all acrocentric autosomes, and small acrocentric X-chromosome and Y-chromosome.

Habitat. Lower montane wet and dry forested habitats from at least elevations of 1500 m in the Andes. The Andean White-eared Opossum is also found in subparamos and paramos in Venezuela and at lower elevations in riparian habitats in the arid Pacific lowlands of Peru. It is a generalist and occurs in secondary forests, open lands, cultivated areas, and suburban areas.

Breeding. In Mérida, Venezuela, reproductively active female Andean White-eared Opossums were observed in February-March and then in June-July, with litters of five young (when present). In Colombia, gestation was estimated at c.12 days, and mean litter size was of 4-2 young, ranging from two to seven young.

Movements, Home range and Social organization. In western Venezuela, the Andean White-eared Opossum has been captured much more frequently (86%) on the ground than in trees (14%).

Status and Conservation. Classified as Least Concern on The IUCN Red List. The Andean White-eared Opossum has a widespread distribution, presumably a large overall population, and occurs in several protected areas. 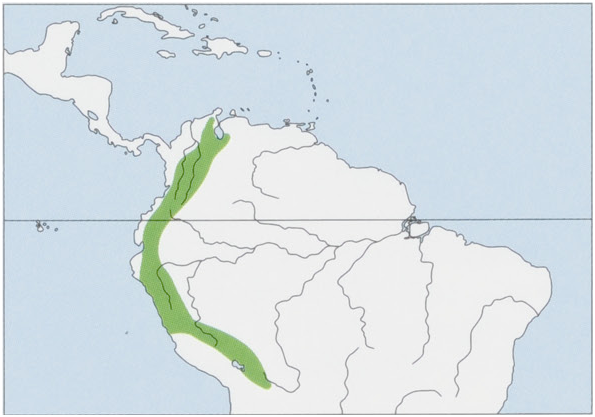