Distribution. E Mexico (Tamaulipas to the S, and including Cozumel I) through Central America and N South America to most of the Amazon Basin, including Trinidad and Tobago Is; also on the Lesser Antilles S of Dominica where it may be introduced. View Figure

Descriptive notes. Head-body 32.4-46.5 cm, tail 33.6-46.5 cm; weight 0-57.2-4 kg. Dorsal fur of the Northern Black-eared Opossum is black or gray, with two distinct layers: dense, pale yellow underfur more or less visible underneath long, coarse, black or gray guard hairs. Head is dirty yellow, sometimes with faint eye mask from nose to near bases of ears, and cheeks are yellow, pale orange, or dirty white with no mid-rostral stripe. Tail length is about the same as head-body length, tail is basally furred, and naked rest oftail is black with a white tip. Ventral fur is similar to dorsal fur, but paler or orange. Feet are black. Ears are large, naked, and black in adults, but they can be white in young up to ¢.4 months of age. Coat color varies somewhat, with forest populations usually black and those from dry habitats gray, but both phases can occur in the same population. Females have a pouch, with eleven or 13 mammae, five or six on each side and a medial mamma. The Northern Black-eared Opossum has a 2n = 22, FN = 20 karyotype, with all acrocentric autosomes, and acrocentric X-chromosome and Y-chromosome. Males are larger than females, and skull shape is sexually dimorphic. Teeth are fully erupted at c.1 year of age. Northern Black-eared Opossums can live up to 2:5 years in the wild.

Habitat. Tropical humid forests and gallery forests but absent from higher elevation forests, arid and semi-arid habitats, and tepuis and associated massifs of the Guiana Highlands above elevations of 1000 m. Northern Black-eared Opossums frequently occur in heavily disturbed areas and in association with human presence.

Food and Feeding. The Northern Black-eared Opossum is considered an opportunistic omnivore, feeding on invertebrates, vertebrates, and fruits according to availabilities. Invertebrates consumed include Coleoptera, Orthoptera, Blattodea, mollusks, and earthworms. Vertebrates found in its diet include rodents, snakes and other reptiles, frogs (Rhinella), rats, and even domestic cats (Felis catus). More than 40 species of fruits, such as Astrocaryum ( Arecaceae ), Clusia ( Clusiaceae ), Inga ( Fabaceae ), Ficus ( Moraceae ), Cecropia ( Urticaceae ), and Psidium ( Myrtaceae ), occur in their diets, including hard fruits that smaller species of opossums are unable to consume. The Northern Black-eared Opossum may act as an important disperser of several of these species’ seeds. They even prey on larger species of opossums; for example, a small (c.670 g) female Northern Black-eared Opossum was seen circling, attacking, and consuming a Gray Four-eyed Opossum ( Philander opossum ) in Panama. Northern Black-eared Opossums have also been seen opportunistically attacking bats tangled in mist-nets. Consumption of carrion has also been recorded. When consuming fruits, they appear to be highly opportunistic, with no apparent limit on fruit size, its position in the tree, or its nutritional value. All fruits consumed had a fleshy pulp, high water content, and no protection. Northern Black-eared Opossums have also been seen feeding on nectar from flowers of Quararibea cordata ( Bombacaceae ) and Marcgravia nepenthoides ( Marcgraviaceae ), and they are probable pollinators of these plants. They are immune to venom of pit vipers, including rattlesnakes; several species of Crotalus, Lachesis, and Bothrops are probably part of their diet.

Breeding. Female Northern Black-eared Opossums make spherical nests that are c.40 cm in diameter. Nests are made in hollow logs, and sometimes squirrel nests are used. Other den locations include palm or fig trees; sometimes they den in burrows or directly on the ground. Materials are gathered with front paws, pushed underneath belly, and held tight with tail. Recently, a video camera trap set in a forested habitat in western Colombia captured a female Northern Black-eared Opossum apparently stuffing nest material (leaves) in her pouch before continuing to forage. Her tail already held several leaves. Females reach sexual maturity at 6-7 months, and males at c.8 months. Young leave the pouch at 75-80 days and stay in the nest for 8-15 additional days before leaving it. There is some variation in reported litter sizes. A female with 14 pouch young was captured in Tamaulipas, Mexico, but average litter size in Panama is six young, varying from two to nine young perlitter. In the Venezuelan Andes, a mean litter size of 4-9 young, ranging from three to nine young, was reported. Mean litter size in the highly seasonal Llanos of eastern Colombia was of 6-5 young (ranging from one to eleven), with two litters per year. In the non-seasonal Valle del Cauca, it was 4-5 young/litter (ranging from one to seven), with up to three litters per year. In Peru, mean litter size of eight young was observed, and in central Brazil, litters were4-9 young. In French Guiana, mean littersize at four study sites was 4-7 young (range 1-10 young/litter), four young (range 2-7 young), 3-2 young, and 6-8 young. Breeding seasons seem to vary geographically and are seemingly related to resource availability. In the Llanos of eastern Colombia, females were reproductively active during the wet season in January-August. In the Venezuelan Andes, they were reproductively active almost all year long, except in July, November, and December;atthis site where climatic conditions were favorable all year long (there is no dry season), threelitters were produced per year. In French Guiana, breeding females were also captured all year long, except in November, but they were more abundant in December—May. In the Brazilian Amazon, female Northern Black-eared Opossums with pouch young were also found all year long, but in central Brazil, breeding was concentrated in the dry season in August-September. In Panama, females that were pregnant or lactating or had pouch young were found in February—October but were absent in August.

Activity patterns. The Northern Black-eared Opossum is nocturnal, becoming active c.l hourafter sunset and with a decrease in activity as the night goes on. In Costa Rica, activity was higher at 21:00 h and 03:00 h than before or after those times.

Movements, Home range and Social organization. The Northern Black-eared Opossum uses and forages equally well in all strata of forested habitats. In French Guiana and central Brazil, it was captured more frequently on the ground, but other study sites reported equal numbers of captures in all strata. In Panama, average distances traveled by the Northern Black-eared Opossum were 69-81 m, reaching a maximum of 122-170 m, but some individuals were recaptured more than 450 m away from their last capture points. In the Venezuelan Llanos, average movements were 61 m, but movements of up to 1400 m have been estimated. Given its body size and documented movements, home ranges based on single trapping grids may be underestimates of its real home range. In fact, its home range was estimated to be less than 1 ha using a grid, but radio-telemetry studies yielded estimated home ranges of 5-3-26-9 ha for females and 53-165 ha for males in Venezuela. Home ranges in Costa Rica were 4-5-7-5 ha, and nightly movements were 686-1020 m. Densities of the Northern Blackeared Opossum were 9-132 ind/km? in Panama, 22-45 ind/km?in French Guiana, and less than 50 ind/km?® in one study in Venezuela but 30-250 ind /km? in another.

Status and Conservation. Classified as Least Concern on The IUCN Red List. The Northern Black-eared Opossum has a wide distribution, large overall population, and high levels of tolerance of habitat modification. 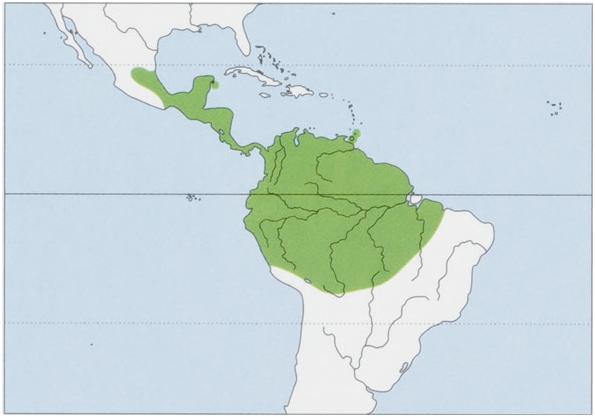 Distribution. E Mexico (Tamaulipas to the S, and including Cozumel I) through Central America and N South America to most of the Amazon Basin, including Trinidad and Tobago Is; also on the Lesser Antilles S of Dominica where it may be introduced.