Descriptive notes. Head-body 7.9-10 cm, tail 6:5.9-1 cm; weight 13-35-9 g. Dorsal fur of the Dwarf Fat-tailed Opossum is dark reddish-brown, without any sign of the tricolored pattern typical of most species of Thylamys , composed of gray-based hairs with brown tips and a few gray-based and dark-tipped guard hairs. Fur is similar or slightly brighter on body sides, contrasting with ventral fur. Head is colored as dorsum on crown and paler in mid-rostral region, with creamy-white-based and browntipped hairs mixed with three-banded hairs that are gray-based, creamy-white in middle, and brown-tipped. Dark brown streak is present in some individuals, and dark and narrow eye-rings extend to nose. Tail length is ¢.85% of head-body length, and tail is proximally furred for 10 mm or less, slightly bicolored, darker dorsally and paler ventrally. When tail is very incrassated,it reaches 3-5-7 mm in diameter. Ventralfur is grayish, with gray-based buffy-tipped or whitish-tipped hairs, and some creamy-white hair on throat, chin, and cheeks. Throat gland is present. Furis ¢.6-8 mm long on dorsum, with longer (c.10-11 mm) guard hairs, and shorter in ventral area (c.5—6 mm). Forefeet and hindfeet are whitish, forelimbs and hindlimbs are grayish-brown dorsally and ventrally, and ears are uniformly dark and naked. Females lack a pouch, but number of mammae is unknown. The Dwarf Fat-tailed Opossum has a 2n = 14, FN = 24 karyotype, with all biarmed autosomes, and with a biarmed X-chromosome and an acrocentric Y-chromosome.

Food and Feeding. Captive Dwarf Fat-tailed Opossums ate fruits (banana and papaya) and invertebrates (tenebrio larvae and grasshoppers) and also preyed effectively on live young mice that weighed as much as 40% of their own body weight. Analyses of fecal contents indicated a predominantly insectivorous diet of ¢.75% animal items (44% arthropods and 31% unidentified animal remains) and ¢.25% vegetal contents.

Movements, Home range and Social organization. Home ranges of Dwarf Fat-tailed Opossums in the cerrado of central Brazil were 2-3 ha for one male and 1-7 ha for one female, with maximum densities of 41-55 ind/km?®. It appears to be primarily ground dwelling because all released individuals fled running on the ground, and none of them used an arboreal escape route.

Status and Conservation. Classified as Least Concern on The IUCN Red List. The Dwarf Fat-tailed Opossum has a wide distribution and occurs in protected areas. Although it seems to occur in low densities, there are no particular threats to it as a whole, although the constant increase in agricultural activities within its distribution suggests that attention should be paid to possible population declines in the future. 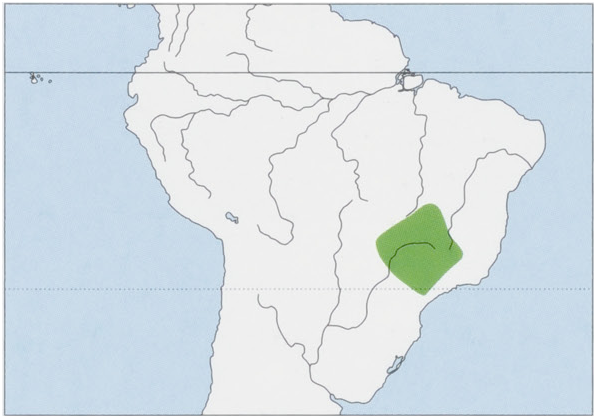