There is strong evidence that this species may constitute a complex of species. Monotypic.

Descriptive notes. Head—body 7-11.4 cm, tail 9.5-13.6 cm; weight 10-19 g. The Chacoan Mouse Opossum has gray-based, pale ocher-brown dorsal fur that is similar, but with a yellowish tinge, on body sides. Mid-rostral fur is slightly paler than crown and dorsum, with narrow but marked eye-rings contrasting with cheeks and crown. Eyerings do not reach bases of ears or nose. Tail length is ¢.125% of head-body length, and tail is pale grayish-brown and bicolored, slightly darker dorsally than ventrally. Ventral fur is buffy white; in the center,it can be completely white or cinnamon-buff from chin to chest, with slightly gray-based hairs posteriorly. Males have a throat gland. Fur is short and velvety. Carpal tubercles are present. Ears are fuscous-brown and moderate in size. Females lack a pouch and have nine mammae, four on each side and a medial mamma. The Chacoan Mouse Opossum has a 2n = 14, FN = 24 karyotype, with all biarmed autosomes, and a biarmed X-chromosome.

Habitat. Ecotones in mosaics of wet grasslands and forested habitats. The Chacoan Mouse Opossum is usually associated with marshes and is always found on the ground. It has been reported to prefer open, grassy, and wet habitats; however, individuals have been captured in forest fragments in Paraguay, gallery forests in Argentina, and plantations and grasslands.

Food and Feeding. Captive Chacoan Mouse Opossums ate raw meat and grapes and were seen drinking water. There is no information, however, on its natural diet.

Breeding. Chacoan Mouse Opossums use grasses to make nests from ground level to 1-6 m high in bromeliad clusters and tree hollows. They have been reported to have litters of up to twelve young, although they have only nine mammae.

Activity patterns. Chacoan Mouse Opossums are nocturnal; individuals have fallen in traps at night and were captured by hand in their nests while resting during the day.

Movements, Home range and Social organization. Chacoan Mouse Opossums are usually captured on the ground in Paraguay but may climb trees to nest. One nest was found in a cluster of bromeliads that contained seven individuals, interpreted as belonging to the same familial unit but with no details about how this conclusion was reached. They are good climbers and use theirtails while climbing branches and grasses.

Status and Conservation. Classified as Least Concern on The IUCNRed List. The Chacoan Mouse Opossum has a wide distribution and presumably a large overall population; it occursin several protected areas and is tolerant of some degree of habitat modification. 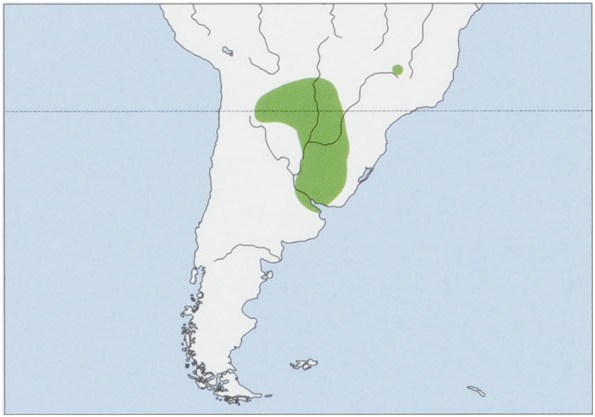