Descriptive notes. Head-body 8.1-11.5 cm, tail 10.9-15.8 cm; weight 15-40 g. The Agile Opossum has grizzled, drab, grayishto reddish-brown dorsal fur, constituted of gray-based hairs with orange to buffy tips. Head is colored as dorsum, with prominent black eye-rings surrounding black eyes; eye-rings do not reach bases of ears and nose. Sometimes there is a faint mid-rostral stripe. Cheeks are pale orange. Transition from darker crown fur and paler mid-rostral furis gradual. Tail length is ¢.140% of head-body length, and tail is brown and bicolored, darker dorsally than ventrally. Ventral fur is yellowish-cream, and there are cream-colored hairs on chin, throat, and upper chest and gray-based cream-tipped hairs on lower pectoral and abdominal area. Throat gland is present. Underparts offorelegs are cream colored in some populations. Fur is long, dense, and woolly. Feet are whitish, lateral carpal tubercles are present in old males, and ears are pale tan and large (more than 21 mm). Females lack a pouch and have 13 mammae, six on each side and a medial mamma. The Agile Opossum has a 2n = 14, FN = 24 karyotype, with all biarmed autosomes, and with a biarmed X-chromosome and an acrocentric Y-chromosome. A FN = 20 has also been reported. Males are larger than females, and skull size and shape are sexually dimorphic.

Habitat. Dry woodlands of north-eastern Brazil (cerrado and caatinga) and seasonally dry forests of eastern Paraguay, north-eastern Argentina, and eastern Bolivia, up to elevations of 1800 m. In central Brazil, the Agile Opossum appears to be associated with mesic areas, such as gallery forests and orchards, but individuals have been collected in cerrado vegetation. It is apparently tolerant of some level of fragmentation and seems to survive well in small fragments, disturbed habitats, and open areas including pastures.

Food and Feeding. The Agile Opossum feeds mainly on invertebrates, with high proportions of fruits and occasionally vertebrates in its diet. Arthropods are usually present in 100% of feces analyzed and include Blattodea, Coleoptera, Hymenoptera (ants), Isoptera (termites), Orthoptera, Hemiptera, and Lepidoptera. Termites and ants are among the most abundant insect groups in the cerrado and are concentrated, thus constituting a valuable food resource. Fruits include mostly Melastomataceae (M:conta, Ossae, Clidemia) but also Solanaceae , Viscaceae ( Phoradendron ), and Rubiaceae ( Psychotria ). In some studies, frequency of occurrence of fruits exceeded 80%, the highest proportion among species of opossums. The Agile Opossum can be considered an important disperser of several seeds of riparian forest species in Brazilian cerrado. In some studies, fruits are actually consumed more frequently during the dry season in cerrado, likely for their water content, but in others there is no difference in diets between wet and dry seasons. Flowers, however, are consumed more frequently during the dry season. Vertebrate remains from birds, feathers, and eggshells suggest that Agile Opossumsactually feed on eggs or nestlings. Depending on what foods are available, there are differences in diets of reproductive and non-reproductive females. During the warm (wet) season in cerrado when food is abundant, populations of Agile Opossums expand their dietary niche as individuals apparently diversify their food preferences. Nutritional contents of preferred diets, determined with cafeteria experiments in captivity where individuals were free to choose food items according to their needs, resulted in 1-3 g of proteins, 3-4 g of carbohydrates, and 0-32 g of lipids per 100 g of dry matter. There is considerable additional information on diet and reproductive biology of a population of the Agile Opossum from a cerrado area in Sao Paulo, Brazil—a population that was originally identified as being Brazilian Gracile Opossums ( Gracilinanus microtarsus ). Although the area falls within the distribution of the Brazilian Gracile Opossum, several researchers have reexamined voucher specimens from that locality, and additional specimens were collected for physiology studies, and all agree that these are actually Agile Opossums. In this population, diet was composed mainly of insects, especially termites, beetles, and ants. In addition to the arthropods listed above, fecal remains included Lepidoptera, Blattodea, Hemiptera, Orthoptera, Diptera, Psocoptera, Ephemeroptera, Arachnida , and snails. Seeds of Solanum ( Solanaceae ), Passiflora ( Passifloraceae ), and Miconia ( Melastomataceae ) were also identified in feces. Food items were consumed in direct proportions to their availabilities, thus characterizing the Agile Opossum as an opportunistic feeder, but sex also affected choice of food items, with males consuming a greater variety of items than females. In fact, there is variation in the food-niche width of males and females depending on season. Average food-niche widths were similar between males and females during the warm-wet season (when insects are more abundant), but they were significantly different during the cool—dry season, becoming broader in males and narrower in females, probably as a consequence of greater home ranges in males. Individual variations in food preference were also affected by sex and season in this population.

Breeding. Information on breeding biology of the Agile Opossum comes from scattered sources and studies, with the exception of one well-studied population. In the central Brazilian cerrado, breeding is apparently linked to the wet season. In cerrado habitats, reproductively active (lactating or pregnant) females were captured in October—December, and in a gallery forest in the same area, pregnant and lactating females were captured in November—-December. In cerrado, juveniles were recorded in December—May and once in August. Synchronized breeding during the rainy season also seems to occur in some populations in the Brazilian Pantanal. Almost continuous breeding activity has been noted in other Pantanal populations, although even in those populations, breeding was more intense from September to March. One lactating female from Bolivia was collected in March, and lactating females were recorded in September in central Brazil. The best and most detailed data on breeding biology of the Agile Opossum, however, comes from the population in a cerrado area of Sao Paulo state, south-eastern Brazil, that had originally been identified as Brazilian Gracile Opossums. In this population, females were reproductively active from September, last month of the dry (cool) season, to March, end of the wet (warm) season, although all females were synchronously active (pregnant or lactating) only in November—December. This suggests that mating is concentrated in a short period at the end of the dry season and is almost synchronous, resulting in most litters being born and raised during the first one-half of the wet and warm season (October-December) when availability of insects is higher. Nevertheless, reproductive activity could only be assessed by estimating pregnancy, or observing lactation, because only one of 15 captured females had her litter of nine newborns attached to her teats. All remaining females were lactating but foraging without their litters. Based on number of functional mammae, mean litter size was estimated at ten young. Soon after the breeding season, proportion of older adults tends to decreases steadily, as first-year individuals replace reproductively active adults, possibly as a consequence of low post-mating survival rates of those adults. Nevertheless, estimates of survival rates for males were different than those of females; survival rates of females were constant before and after the breeding period, but survival rates of males decreased sharply after the breeding period. Some males captured after the breeding period also showed poor body condition (e.g. loss of fur and parasite infestation), reinforcing the hypothesis of low survival. Because generational replacementis gradual and incomplete (a fraction of the males did survive to breed in the following breeding season), this population can be considered partially semelparous.

Activity patterns. There is no specific information available for this species, but the Agile Opossum is likely nocturnal.

Movements, Home range and Social organization. Agile Opossums are mostly arboreal or scansorial. Nests have been found at heights of 1-6 m, and they are usually captured on the ground or in traps set in understory. Home ranges in a cerrado area in south-eastern Brazil were 0-06-0-63 ha. Densities in gallery forests in cerrado of central Brazil were 50-700 ind/km?. In a gallery forest in a cerrado area of central Brazil, distances between consecutive captures of adult specimens averaged 41-1 m, with a maximum of 142-1 m. Movements increased with age; adults traveled longer distances than subadults. In the population of the Agile Opossum originally identified as Brazilian Gracile Opossums in a cerrado area in south-eastern Brazil, average density was much higher than in all other populations studied, with an average of 1130 ind/km?, varying from 650 ind/km? to 2340 ind/km* from month to month. Mean maximum distance moved by individuals in this population was 27 m.

Status and Conservation. Classified as Least Concern on The [UCN Red List. The Agile Opossum is relatively common with a wide distribution and presumably a large overall population. Itis tolerant, to some degree, of anthropic influence and habitat modification, and it occurs in several protected areas. It can be regionally or locally threatened due to severe habitat loss, but it can occur in great abundance in small fragments. 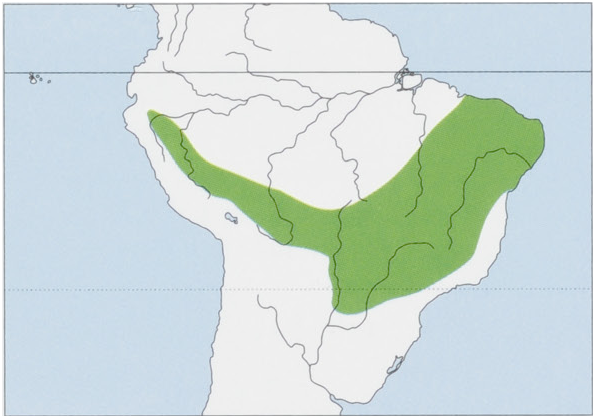