This species is treated as monotypic pending a revision using modern techniques; it is likely that Colombian and western Venezuelan populations represent an additional species. Monotypic.

Descriptive notes. Head-body 9.3-10.7 cm,tail 14.2-16 cm; weight 21-31 g. The Delicate Slender Opossum has dusty reddish-brown dorsal fur that extends onto body sides and contrasts sharply with ventral fur. Head is same color as dorsum on crown but gradually paler in mid-rostral region, contrasting with narrow dark eye-rings that do not reach bases of ears and buffy cheeks. Tail length is ¢.150% of head—body length, and tail is paler ventrally than dorsally. Ventral fur is mostly white or buffy from chin to inguinal area, sometimes extending onto inside surfaces of limbs, with little or no presence of lateral bands of gray-based hairs. Dorsal fur is ¢.7 mm long. Males have carpal tubercles. Females lack a pouch and have nine mammae, four on each side and a medial mamma. Karyotype of the Delicate Slender Opossum is unknown. Although several karyotypes have been reported as belonging to the Delicate Slender Opossum, they are from specimens from localities outside its distribution as currently understood, and they likely represent other taxa. Skull shape is sexually dimorphic.

Habitat. Humid tropical forests at elevations from sea level to ¢.1700 m, including welldrained and swampy primary forests and secondary forests.

Breeding. Six and seven embryos have been reported for the Delicate Slender Opossum.

Activity patterns. All specimens of the Delicate Slender Opossum collected in French Guiana were captured at night, and specimens have been seen foraging in early evening.

Status and Conservation. Classified as Least Concern on The IUCN Red List. The Delicate Slender Opossum has a wide distribution and occurs in several protected areas. 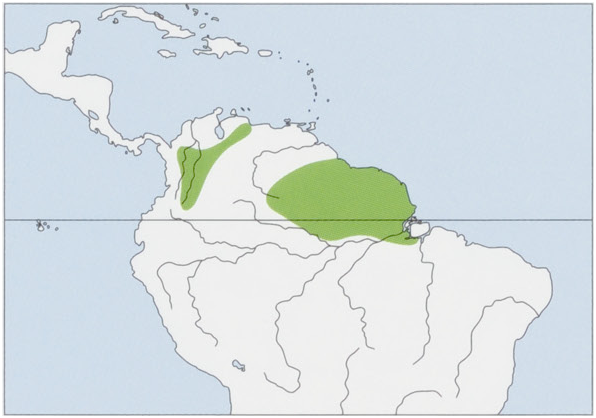