This species is currently treated as monotypic, although there is evidence that it may contain more than one species.

Distribution. E Brazil, along the coast from Sergipe to Sao Paulo, and in Minas Gerais. View Figure

Descriptive notes. Head-body 12.7-19.4 cm (males) and 10-15.8 cm (females), tail 14.6-23.7 cm (males) and 14-20 cm (females); weight 25-140 g (males) and 20-72 g (females). The Gray Slender Opossum has dark brownish-gray dorsal fur. Head is colored as dorsum, with dark prominent eye-rings, pale gray fur between eyerings, and creamy white cheeks. There is no mid-rostral stripe. Intensity and width of eye-rings apparently varies geographically or with age. Tail length is ¢.130% of headbody length, and tail is bicolored, paler ventrally and toward tip where it is whitish. Ventral fur is creamy white, sometimes tinged with pink in live individuals, and bordered by lateral bands of gray-based, white-tipped hairs. Dorsal surfaces of forelimbs and hindlimbs below knees and elbows are entirely white. Ears are large (more than 25 mm). Females lack a pouch, and careful dissection of one specimen counted at least 15 mammae, seven on each side and a medial mamma. Mammary counts in a population ecology study in south-eastern Brazil found that lactating mammae number varied from seven to 18, with a modal number of twelve. Fur length and texture varies with sex and age. Juveniles and young adults of both sexes have longer, shinier, and softer fur (c.10 mm along back). Older, reproductively active females have shorter (c.5 mm), duller, and coarser fur; older, sexually mature males typically have shorter fur on shoulders (c.5b mm) and even shorter, stiff, duller fur between shoulders, although rest of body is covered with longer and softer hair of younger individuals. There is also geographical variation, with specimens from drier inland habitats paler than those from wet coastal forests. The Gray Slender Opossum has a 2n = 14, FN = 24 karyotype, with all biarmed autosomes, and with a metacentric X-chromosome and an acrocentric Y-chromosome. A FN = 20 has also been reported. Males are much larger than females, and skull size and shape are sexually dimorphic.

Habitat. Humid Atlantic Forest from sea level to 800 m, inland semi-deciduous forests where it can occur at higher elevations, gallery forests in cerrado and caatinga adjacent to the Atlantic Forest domain, and high-elevation humid forest enclaves in caatinga, and continental islands.

Food and Feeding. Diet of the Gray Slender Opossum is composed mostly of invertebrates, mainly arthropods, complemented with fruits. In the Atlantic Forest, arthropods occurred in all fecal samples analyzed, and a few of these also had seeds. Diet includes Coleoptera, Orthoptera, Opiliones, Hymenoptera (ants), Arachnida, and Lepidoptera larvae. In cerrado, diet was also mainly composed of arthropods, found in 100% offecal samples examined. Hymenoptera (ants) were found more frequently, but Coleoptera, Isoptera (termites), Diplopoda, Arachnida, Orthoptera, and Blattodea were also eaten. Invasive plants were found in 29% of these samples, mainly during the dry season, and flowers, but there was no difference in fruit consumption between wet and dry seasons in cerrado. Identified plants in its diet included Melastomataceae (Clidemia and Miconia ), Rubiaceae ( Psychotria ), Meliaceae , and Lauraceae . The Gray Slender Opossum is an important disperser of several seeds of riparian forest species in the Brazilian cerrado. Nutritional contents of preferred diets, determined with cafeteria experiments in captivity where individuals were free to choose food items according to their needs, resulted in 1-8 g of proteins, 4-1 g of carbohydrates, 0-45 g of lipids, and 2:3% offibers per 100 g of dry matter.

Breeding. Female Gray Slender Opossums usually make nests in the lower strata of the forest below 2-5 m. Males and females will also use artificial nest boxes as dens, although during a five-year population study using such boxes, no females with pouch young were recorded nesting in them. They reach sexual maturity at c.6 months old. In south-eastern Brazil, breeding season starts in October or November and lasts until February or March, so lactation coincides with the wet season and high food availability. Breeding is apparently triggered by photoperiod. Juveniles are present in the population in January—May, corresponding to late wet and early dry seasons. An analysis of more than 200 museum specimens for which relative age class and reproductive condition could be estimated suggested that the Gray Slender Opossum is a semelparous; that is, individuals reproduce only once in a lifetime and die shortly after breeding. Pregnant females were present only in November, early lactating females were observed in October-December, and late lactating females were observed in January-April, indicating that mating occurred in October-December. Proportion of older males increases from June to December, as a consequence of growth of males born early in the year, and peaks in November—December, coinciding with the mating period. After that, frequency of old males decreases by almost 50% in January, and older males are totally absent from the population in February—May. Thus, it seems that males born early in the year reach sexual maturity later that same year, reproduce, and then die. Likewise, lactating females are found in October-April and post-lactating females in March—-May. Older, reproductively active females decrease in frequency after the mating period and completely disappear from the population in July-August. Therefore, it seems that there is almost no generation overlap (except for very few outliers). The pattern inferred from museum specimens was confirmed during a two-year population study in south-eastern Brazil. Both sexes had lower survival rates during the mating season, no individuals captured the first year were recaptured the following year, and abundance of both sexes decreased from May onward and resulted in total absence of adults in November-December. Adults only reappeared in the population in March of the following year.

Activity patterns. There is no specific information available for this species, but the Gray Slender Opossum is probably nocturnal.

Movements, Home range and Social organization. The Gray Slender Opossumsis considered scansorial. It moves relatively fast compared with larger species of opossums on experimental horizontal supports, and it is able to jump across gaps. In some studies, it moved preferentially in the understory, rarely using canopy or ground, and in others, it was captured more frequently on the ground (two-thirds of the time) than in the understory (one-third of the time). No differences between sexes in frequency of ground and understory movements were found, or differences in diameter or slope of supports used. Males moved over areas that were 50% larger than those of females. Home range sizes were 0-4-2-1 ha, and average recorded distance moved between two successive captures was 41 m, with average maximal distances moved reaching 54 m. Perceptual range (maximum distance at which a landscape element can be detected) is less than 100 m, based on ability of Gray Slender Opossums released in a grass matrix to detect and head for forest fragments from which they had been removed. In a fragmented landscape of Atlantic Forest, individuals showed clear preference for fragments rather than vegetation corridors or cultivated matrix between fragments, indicating that mobility between fragments can be limited.

Status and Conservation. Classified as Least Concern on The IUCN Red List. The Gray Slender Opossums has a wide distribution and presumably a large overall population. It is tolerant of some levels of habitat modification and fragmentation and occurs in several protected areas. 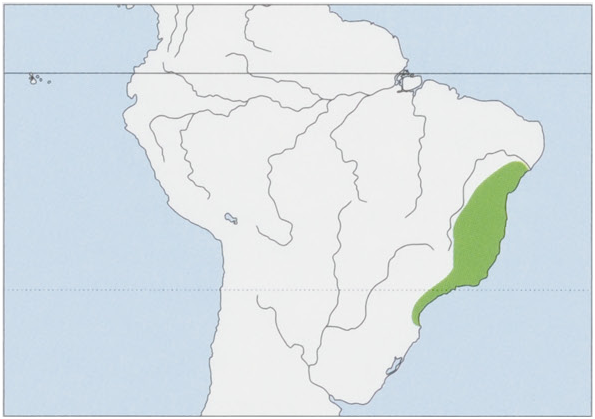 Distribution. E Brazil, along the coast from Sergipe to Sao Paulo, and in Minas Gerais.