Descriptive notes. Head-body 11.4-15.3 cm (males) and 9.8-1399 cm (females), tail 15-21.2 cm (males) and 14-5— 18-1 cm (females); weight 20-70 g (males) and 16-47 g (females). Dorsal fur of the Brazilian Slender Opossum is dark brownish-gray washed with reddish, particularly on cheeks and body sides. Cheeks are creamy white with a reddish tinge. Head is colored as dorsum, with dark, prominent eye-rings contrasting with pale brown midrostral fur. There is no mid-rostral stripe. Tail length is c.145% of head-body length, and tail is bicolored, dusky dorsally and paler ventrally, and whitish at tip. Ventralfur is creamy white, contrasting with dorsal coloration and lacking any lateral bands of graybased hairs, and it occasionally has a pink hue in live specimens. Hindfeet are white, and forelimbs and hindlimbs are dark from wrists and ankles up. Ears are small (less than 25 mm). Females lack a pouch, and number of mammae varied from seven to 13 in a population ecology study of a single population. The Brazilian Slender Opossum has a 2n = 14, FN = 24 karyotype, with a biarmed X-chromosome and an acrocentric Y-chromosome. Males are much larger than females, and skull size and shape are sexually dimorphic. Brazilian Slender Opossums show the same ageand sex-related variation in fur length and texture as that seen in the Gray Slender Opossum ( Marmosops incanus ), with very long (c.10 mm) and soft fur on immature specimens and short fur in adults.

Habitat. Montane and cloud forest habitats above 800 m in elevation along coastal mountains of south-eastern Brazil.

Food and Feeding. Diet of the Brazilian Slender Opossum includes arthropods,fruits, and flower parts, and occasionally small vertebrates, although a new diet composition study seems to indicate that it is more frugivorous than previously thought. Invertebrates consumed include Coleoptera, Orthoptera, Hymenoptera (ants), Blattodea, Araneae, Opiliones, and snails. Fruits of species of Piper ( Piperaceae ) are particularly consumed, but diets also include Solanaceae ( Solanum ), Melastomataceae (Leandra, Ossaea) , Myrtaceae ( Psidium , Campomanesia ), and Rosaceae ( Rubus ). Diets vary seasonally. Invertebrates and flower parts were more frequent in fecal samples during the dry season, possibly due to their higher relative abundance. Diets increased in diversity in the dry season due to the inclusion of new fruit species and reduced relative importance of Piper fruits in the diet.

Breeding. Litter size of the Brazilian Slender Opossum varies from seven to 13 young, based on number of milking teats on lactating females. One female found in her nest had a litter of five young. Breeding season is in September—March, beginning at the end of the dry season and with lactation coinciding with high resource availability. Breeding season is triggered by photoperiod, with increase in daylength, and possibly lasts as long as fruits are available. The Brazilian Slender Opossum is semelparous; no individual takes part in more than one breeding season. In fact, all adult males disappear from the population in December—January, and adult females disappear after weaning theirlitters in March-April. After April, all females are either juveniles or subadults, and adult males and females only reappear in the population in August, thus resulting in generations separated by c.1 year. In another study, no adult individuals captured in one year were recaptured in the following year, thus reinforcing the hypothesis of a semelparous breeding system.

Activity patterns. There is no specific information available for this species, but the Brazilian Slender Opossum is probably nocturnal.

Movements, Home range and Social organization. The Brazilian Slender Opossum uses the ground more than the understory and never uses the canopy. Home ranges estimated using a trapping grid were 0-14-15 ha. No differences in home ranges of males and females were found during the breeding season, but females are territorial: home ranges of females do not overlap, but sometimes a specific female is excluded and replaced by another. Home ranges of males overlap home ranges of other males and females. Individual daily movements estimated with spool-and-line devices covered 0-12-0-8 ha, averaging 0-4 ha, and daily movements were directly related to food supply and especially availability offruit; distance traveled increased when food supply decreased. Males and females do not differ in daily movements; both moved farther during the dry season.

Status and Conservation. Classified as Least Concern on The IUCN Red List. The Brazilian Slender Opossums is considered an uncommon species and has a relatively restricted distribution, but it is unlikely to be declining fast enough to qualify for listing in a more threatened IUCN category. Classification as Least Concern is supported by the fact that a large portion of suitable habitat has not been sampled, and it is possible that it is more common than presently thought. 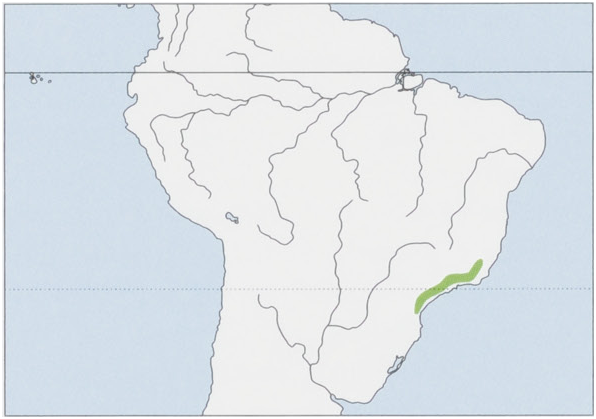