Descriptive notes. Head-body 6.2-9.6 cm,tail 7.9-10.8 cm. The Dry Chaco Fat-tailed Opossum has grayish-brown dorsal fur, with moderately marked tricolored pattern, paler on body sides. Mid-dorsal fur has four-color, banded cover hairs; hairs are gray at bases, followed by a dark brown band, then a creamy brown one; and tips of hairs are dark. Head is colored as dorsum, but facial fur is paler, with distinct dark mid-rostral stripe and moderately developed dark brown eye-rings that extend toward but do not reach nose. Tail length is ¢.120% of head-body length, and tail is uniformly and markedly bicolored (brownish dorsally and whitish ventrally). When tail is incrassated (enlarged with stored fat), it can reach 67 mm in diameter. Ventral fur is creamy white from cheeks to anus. Furis soft and fine, with 7-8 mm cover hairs in mid-dorsal region and 5-6 mm hairs (in ventral region. Forefeet and hindfeet are small and whitish, and ears are large, rounded, and appear naked. Females lack a pouch, but number of mammae is unknown. The Dry Chaco Fat-tailed Opossum has a 2n = 14, FN = 20 karyotype, with four pairs of biarmed and two pairs of acrocentric autosomes, and with a small biarmed X-chromosome. The Y-chromosome is absent in somatic cells.

Status and Conservation. Classified as Least Concern on The IUCN Red List. The Dry Chaco Fat-tailed Opossum has a relatively wide distribution and presumably a large overall population. It does not face any major ¢ »nservation threats, but some populations might be declining because of deforestation anc. conversion of native grasslands, shrublands, and xerophytic Chacoan forests to agriculture. 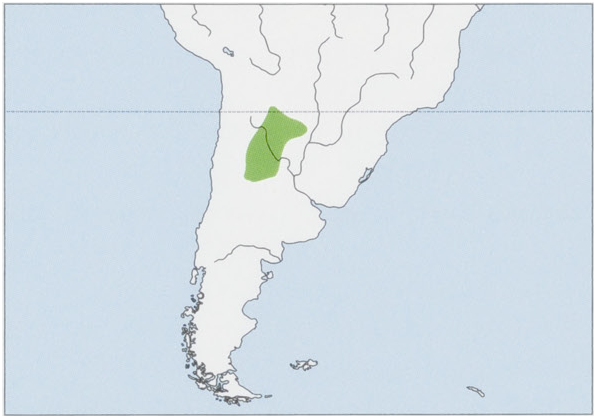