Descriptive notes. Head-body 10-9-12:3 cm, tail 11.8-13.2 cm; weight 16-54 g. Mid-dorsal fur of Tate’s Fat-tailed Opossum is grayish to slate gray, with the typical tricolored pattern of species of Thylamys , markedly paler and grayish with cinnamon tint on body sides. Head is colored as dorsum, but facial and mid-rostral fur is paler, with distinct dark mid-rostral stripe and prominent black eye-rings that extend anteriorly (8 mm) and posteriorly (4 mm). Tail length is ¢.110% of head-body length, and tail is bicolored on proximal two-thirds (blackish dorsally and white ventrally) and whitish on distal one-third, with tip (2-18 mm) usually uniformly pale to pure white. When tail is incrassated (enlarged with stored fat), it reaches 8 mm in diameter. Ventral fur is white in narrow stripe from cheeks to anus (wider at chest and narrower in abdominal region), flanked with broad lateral bands of gray-based hairs, and throat gland is present. Fur is long (12 mm) on rump and shorter (8 mm) on abdominal region. Forefeet and hindfeet are small and white, dorsal regions of forelimbs and hindlimbs to wrists and ankles are colored as body sides, and ears are dark gray, long, and broad. Females lack a pouch, but number of mammae is unknown. Karyotype of Tate’s Fat-tailed Opossum is unknown.

Habitat. Dry habitats, including deserts, lomas, and mountain scrub on the western slope of the Andes at elevations of 300-3000 m.

Status and Conservation. Classified as Data Deficient on The IUCN Red List. There is no recent information on population status of Tate’s Fat-tailed Opossum and almost no information on any of its ecological requirements. It may be threatened because its limited distribution is in a region that is being developed, with small human settlements and conversion of natural habitats to agriculture. Nevertheless,it is not possible to adequately assess status of Tate’s Fat-tailed Opossum because of the lack of even basic biological information. It occurs in at least one protected area (Lomas de Lachay National Reserve) in Lima Region. 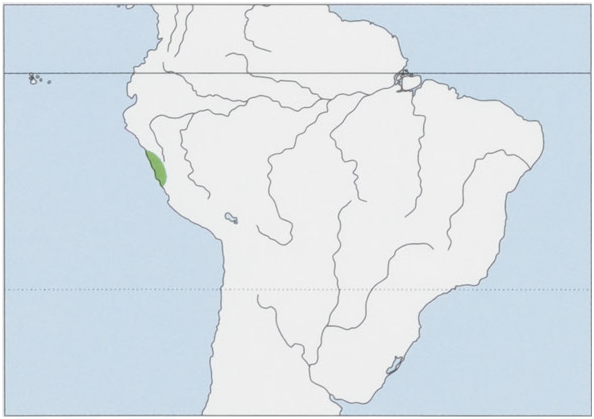