Descriptive notes. Head-body 8.6-11.9 cm, tail 12.5-15.4 cm; weight 15-5-62 g. The Argentine Fat-tailed Opossum has brownish-gray dorsal fur, with typical tricolored pattern of species of Thylamys , and is paler on body sides. Head is colored as dorsum, but facial fur is paler, with faint mid-rostral stripe, and there are thin, dark eye-rings. Tail length is ¢.135% of head—body length, and tail is slightly bicolored and can become incrassated (enlarged with stored fat). Ventral fur is gray-based, yellowish or white, and chin and throat are often yellowish or white, occasionally with whitish patches on chest, but usually whitish throughout. Forefeet and hindfeet are grayishwhite, and ears are fuscous. Females lack a pouch, and number of mammae is unknown. The Argentine Fat-tailed Opossum has a 2n = 14, FN = 20 karyotype, with four pairs of biarmed and two pairs of acrocentric autosomes, and with a small acrocentric X-chromosome. The Y-chromosome is absent in somatic cells.

Habitat. Dry thornscrub and shrub forests at elevations of 515-3750 m.

Food and Feeding. There is no specific information available for this species, but storage of fat in the tail of the Argentine Fat-tailed Opossum has been observed in May-July.

Breeding. A female Argentine Fat-tailed Opossum with a single young attached to a nipple was captured in December, and another lactating female, without any attached young, was captured in February.

Status and Conservation. Classified as Least Concern on The IUCN Red List. The Argentine Fat-tailed Opossum has a wide distribution, presumably large overall populations, and it also occurs in several protected areas throughout its distribution. 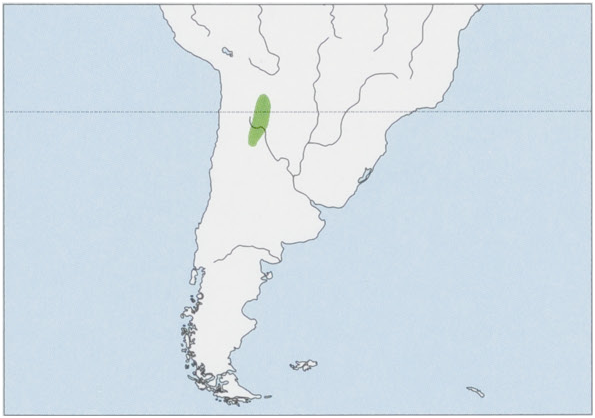