type locality not given. Identified by Tate in 1933 as “ S. Ignacio , Misiones, Paraguay.”

Descriptive notes. Head-body 7-12 cm, tail 8.5-13.4 cm; weight 11-32 g. Dorsal fur of the Chacoan Fat-tailed Opossum is dark grayish or brownish gray mid-dorsally, with typical tricolored pattern of species of Thylamys , and markedly paler on bodysides. Head is colored as dorsum orslightly darker, but facial fur is paler, with distinct dark mid-rostral stripe. Narrow, dark eye-rings surround black eyes; paler shade extends forward toward nose without reaching it. Tail length is c¢.115% of head-body length, tail is markedly bicolored (dark dorsally and whitish ventrally), and it can become distinctly incrassated (enlarged with stored fat). Ventral fur is white or creamy from chin and cheeks to anus. Fur is short in mid-dorsum (7-9 mm long). Forefeet and hindfeet are small and whitish. Ears are large, naked, and reddish-brown. Females lack a pouch, and 15 mammae are present, seven on each side and a medial mamma. The Chacoan Fat-tailed Opossum has a 2n = 14, FN = 20 karyotype, with four pairs of biarmed and two pairs of acrocentric autosomes, and with a small biarmed X-chromosome. The Ychromosome is absent in somatic cells.

Food and Feeding. Arthropods are the most common item in the diet of the Chacoan Fat-tailed Opossum, but fruits, seeds, and leaves are also consumed.

Movements, Home range and Social organization. The neotype of the Chacoan Fattailed Opossum was caught on the ground, but other specimens were captured on the ground and in traps set at a height of up to 1 m in trees and shrubs.

Status and Conservation. Classified as Least Concern on The IUCN Red List. The Chacoan Fat-tailed Opossum has a wide distribution and presumably a large overall population, but deforestation in the Chaco region of Paraguay might lead to decreases in its population sizes. 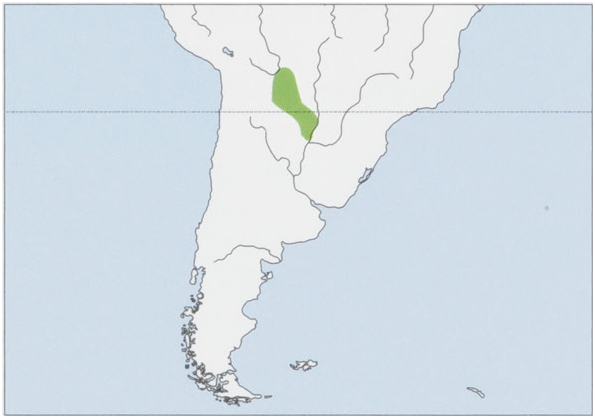