As treated here, this species includes M. dorothea as a synonym, but taxonomic revisions are needed. Monotypic.

Descriptive notes. Head—body 11:8-16.3 cm,tail 15.4-20.4 cm; weight 35-85 g. Dorsal fur of the White-bellied Slender Opossums is dull reddish-brown or orangish-reddishbrown. Body sides and neck are paler and more tinted with orange. It has black eyerings contrasting with dorsal coloration, but no mid-rostral stripe. Tail length is ¢.130% of head-body length, and tail has fur on proximal 10 mm. Naked part oftail is uniformly dark brown, or sometimes indistinctly bicolored, paler ventrally than dorsally, or paler distally than proximally. Ventral fur is creamy white from chin to inguinal region or anus, and on cheeks. Some, but not all, White-bellied Slender Opossums have a narrow band of gray-based hairs only in abdominal region. Throat gland is present in males. Fur is short, soft, and velvety. Hindfeet are whitish, forefeet are brown with pale toes, and males have lateral carpal tubercles. Females lack a pouch and have eleven mammae, five on each side and a medial mamma. The White-bellied Slender Opossum has a 2n = 14, FN = 24 karyotype, with all biarmed autosomes, and with a small biarmed X-chromosome and a very small biarmed Y-chromosomes. Male White-bellied Slender Opossums are larger than females, and skull size and shape are sexually dimorphic.

Habitat. Lowland humid forests, including mature, secondary, and disturbed forests and even open areas and cultivated fields, at elevations of 300-1500 m. In the Amazon Basin, White-bellied Slender Opossums were collected in seasonal floodplain and terra firma habitats.

Food and Feeding. Although little has been reported on diets of White-bellied Slender Opossums, one individual was seen carrying a large tailless whip scorpion (Phrynus, Amblypygi) in its mouth.

Breeding. Based on capture dates ofjuvenile White-bellied Slender Opossums, breeding season is hypothesized to have two well-marked periods, January-March and June-July. In the Brazilian Amazon, females collected in the rainy season were juveniles or adult females that had not yet reproduced, and only one out of eleven females collected in August (dry season) had signs of having had a suckling litter. In Peru, lactating females were collected in January, March, May, and June, and a pregnant female was collected in June. Juveniles were observed in January and March—]July.

Activity patterns. One White-bellied Slender Opossum was reportedly feeding at night, although another individual was caught by hand in Peru while climbing a tree during daytime.

Movements, Home range and Social organization. One White-bellied Slender Opossum was shot at a height of ¢.10 m, two were shot at heights of c.2 m, and all others were either trapped or shot on the ground. At one Peruvian Amazonsite, about onehalf of released specimens chose escape routes on the ground. At anothersite, specimens were collected at heights of 0-5—1-5 m.

Status and Conservation. Classified as Least Concern on The IUCN Red List. The Whitebellied Slender Opossum has a wide distribution and presumably a large overall population. It occurs in several protected areas and is tolerant of habitat modification. 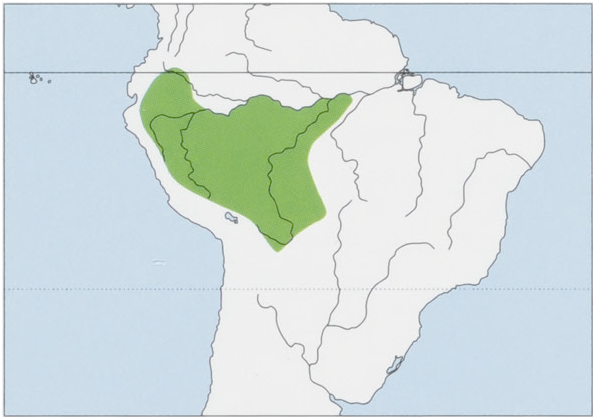