Distribution. N Venezuela (Falcon), known only from the type locality in the Mirimire and Capadare Mts. View Figure

Descriptive notes. Head-body 10.2-10.5 cm, tail 13.1-13.2 cm; weight 24-26-5 g. The Narrow-headed Slender Opossum has grayish brown dorsal fur, with scattered short white guard hairs on rump. Eyes are surrounded with ill-defined narrow eye-rings, mostly between eyes and nose. Tail length is ¢.130% of head—body length, tail has fur on about proximal 5 mm, and naked part is indistinctly bicolored, fuscous dorsally and yellowish-cream ventrally. Ventral fur is gray-based creamy white, with a faint yellowish cast; this color also appears on chin and lips and along a narrow median stripe on abdominal and inguinal regions. Fur is short and smooth. Forefeet and hindfeet are small and whitish. Ventral sides of forelimbs and hindlimbs are also whitish. Ears are fuscous and relatively large. Females probably lack a pouch, but number of mammae is unknown. Karyotype of the Narrowheaded Slender Opossum is unknown.

Habitat. Mature humid evergreen forest with vines and epiphytes and a closed subcanopy of 10 m and an irregular upper canopy of 25-30 m, at an elevation of ¢.150 m.

Movements, Home range and Social organization. The three known specimens of the Narrow-headed Slender Opossum were trapped on the ground, but little is known about its social behavior.

Status and Conservation. Classified as Data Deficient on The IUCN Red List. The Narrow-headed Slender Opossum is known from only three specimens from a single locality. There are no new recordssince it was described in 1979, and existing information is insufficient to assess any conservation status. 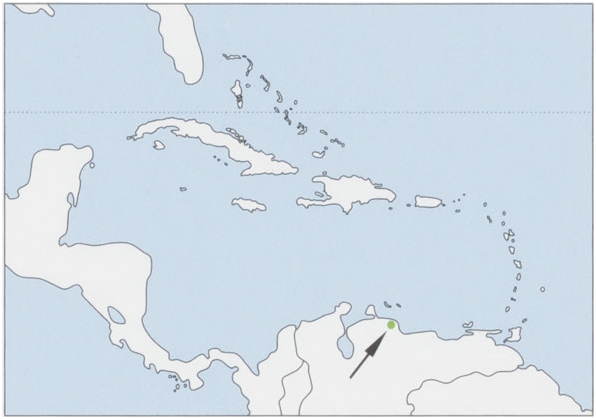 Distribution. N Venezuela (Falcon), known only from the type locality in the Mirimire and Capadare Mts.