Etymology. The specific name is an adjective derived from the Latin "roseus", meaning pink, and "palma", meaning hand surface. It refers to the pink colour of webbing between fingers in life, diagnostic for the species.

Diagnosis. Assigned to the genus Boophis   based on the presence of an intercalary element between ultimate and penultimate phalanges of fingers and toes (verified by external examination), presence of nuptial pads and absence of femoral glands in males, absence of gular glands in males, enlarged terminal discs of fingers and toes, lateral metatarsalia separated by webbing, absence of outer metatarsal tubercle, and molecular phylogenetic relationships (see Vieites et al. 2009 for a complete molecular analysis of Boophis   ), and overall similarity to other Boophis species.   Assigned to the Boophis goudoti   group based on the following combination of characters: large size (male SVL 60–69 mm); brownish dorsal ground colour; non-transparent ventral skin; no distinct red (but pinkish) colour on ventral surface; presence of dermal flaps on heels and elbows; presence of webbing between fingers; single subgular vocal sac; presence of vomerine teeth; presence of white tubercles ventrally under the cloacal opening, presence of a sharp canthus rostralis; and molecular phylogenetic relationships (see Vieites et al. 2009). Boophis roseipalmatus   differs from all described species in the B. goudoti   group by strong genetic differentiation (see below) and the usually distinct pink webbing between the fingers. It furthermore differs from B. boehmei   , B. rufioculis   , B. burgeri   , B. reticulatus   , and B. axelmeyeri   by its larger size (SVL of males 60–69 mm in roseipalmatus   vs. 27–43 mm in the other mentioned species) and different iris colouration (absence of red colour in the outer iris area as is typical for B. axelmeyeri   , B. boehmei   , and B. rufioculis   ; absence of a pattern of dark stripes typical for B. reticulatus   ; no distinct blue iris periphery as in B. boehmei   and B. burgeri   . It differs from Boophis goudoti   , B. obscurus   , and B. periegetes   by the presence of distinct dermal flaps on heels. It differs from B. brachychir   by its larger size (SVL of males 60–69 mm vs. 39–47 mm) and absence of the sharply outlined brown marking that extends from between the eyes to the posterior back present in B. brachychir   . It differs from B. entingae   by its larger size (male SVL 60–69 mm vs. 47–58 mm) and absence of a reticulated pattern on the concealed parts of the thighs. It differs from the most similar B. madagascariensis   by the absence of a spotted pattern on the concealed parts of the thighs, and by the often pink colour of the webbing between fingers in life.

In life, ground colour of back brown with a distinct irregular blackish pattern that consists of few isolated black spots anteriorly and a connected blackish network of blotches posteriorly that covers most of the back. A slightly darker brown stripe is present between the eyes. A light brown spot bordered by a thin beige line is present between the posterior part of eye and upper jaw. Head sides anterior to this spot are darker brown than dorsally. Hindlimbs and forelimbs with very contrasting blackish bands, which are rather irregularly arranged. Dorsal surface of fingertips brown. Webbing between fingers pink, pinkish-brown between toes. Iris golden with brownish pigment around the pupil, posterior iris periphery beige. Ventral side dirty whitish on chest, light brownish on belly and darker brownish on hindlimbs.

Variation. The morphometric variation of B. roseipalmatus   is given in Appendix 3. There is sexual dimorphism in size, females attaining a SVL of 86.6 mm while maximum SVL observed in males is 68.4 mm. The colouration is very variable. The number and extent of black spots and markings on the back can be much less than in the holotype (e.g. ZSM 211/2004, Fig. 12 View FIGURE 12 ) or even reduced to an almost uniform reddish brown or blackish-brown back. Specimens strongly marbled with beige and dark brown also occur. All specimens have pink webbing, especially between fingers and (often less distinct) between toes. Fingertips are dorsally brown, grey, or whitish. The dark crossbands on the hindlimbs range from very distinct to poorly recognizable. The iris colour can be uniformly beige, but is mostly silvery or golden with brownish or even reddish pigment around the pupil. The posterior iris periphery of undisturbed specimens is mostly beige. In frogs displaying defense behaviour (inflation of the body), the skin of the iris periphery is slightly protruded and a pink stripe above the eye becomes visible. The ventral colouration ranges from whitish with grey mottling to largely brown with grey mottling, sometimes with a pink shade. The throat is mostly dirty whitish or greyish. A darker dorsal colouration seems to be correlated with a comparatively darker ventral colouration.

Natural history. Specimens were found at night in rainforest, on the vegetation, at perch heights of 0.5– 2 m. Nothing else is known on the habits of this species.

Molecular relationships. Although relationships among most species of the B. goudoti   group are not resolved (see molecular differentiation section of B. brachychir   above), the molecular tree ( Fig. 7 View FIGURE 7 ) places B. roseipalmatus   as sister species of B. madagascariensis   with maximum support (BS 100%, BPP significant). Each of these species is a monophyletic lineage as well. The two species are highly divergent from each other (4.9–6.1%) whereas divergences within B. roseipalmatus   (up to 0.6%) and B. madagascariensis   (up to 1.7%, differentiating the sample from Ilampy from the other specimens) are lower. Two molecular samples provided by F. Andreone (see Fig. 7 View FIGURE 7 ) also indicate sympatry of these two species in north-eastern Madagascar (Ilampy), but the corresponding specimens were not examined by us.

Distribution. At present Boophis roseipalmatus   is known from its type locality, Montagne d'Ambre National Park, as well as lower elevations in the same area known as Fontenay Nature Park and Forêt d'Ambre Special Reserve (see D'Cruze et al. 2008; Appendix 10). Based on analyses of DNA barcoding data by F. Andreone (see Fig. 7 View FIGURE 7 ) it also occurs at Masoala (Ilampy campsite), and own preliminary data (not included herein) indicate its possible occurrence at Marojejy (in sympatry with B. madagascariensis   ).

Available names. Due to the similarities of Boophis madagascariensis ( Peters, 1874)   and Rhacophorus herthae Ahl, 1929   with B. entingae   and B. roseipalmatus   a discussion about the identity of the former two taxa is provided here. Boophis madagascariensis   was described as Rhacophorus madagascariensis Peters, 1874   from the imprecise type locality " Madagascar " based on a single holotype (ZMB 8217) from the collection of Crossley. Bauer et al. (1995) considered this specimen, together with ZMB 10473 View Materials from Betsileo, collected by Hildebrandt, as syntypes, but this interpretation is not justified from the original description. We therefore consider ZMB 10473 View Materials not as syntype of B. madagascariensis   and recognize only a single holotype which is also in agreement with Guibé (1978) and with Blommers-Schlösser & Blanc (1991). According to the original description of Peters (1874) and the accompanying figure (Tafel 1) the holotype (ZMB 8217) has numerous scattered white spots on the inner parts of the thighs which are still well visible. This chromatic character is a distinct difference to all known specimens of B. roseipalmatus   that have largely uniformely coloured thighs without light spots. The holotype of B. madagascariensis   differs from B. entingae   by the absence of a distinct, sharply outlined brown marking that extends from upper eyelids and the interorbital region to the posterior dorsum. Such a marking is not recognizable in the holotype and not visible on the figure in the original description. A further difference is the size of the dermal heel flap which is broad, large and triangular in the B. madagascariensis   holotype and much narrower smaller and tubercle-shaped in B. entingae   . Finally, the holotype has two distinct whitish dots ventrally under the cloaca on the proximal parts of the thighs which are absent or indistinct in most individuals of B. entingae   .

Rhacophorus herthae Ahl, 1929   was described based on a single juvenile holotype ( ZMB 31577 View Materials ) of 25 mm SVL from Akkoraka, central Madagascar. There are only poorly recognizable light spots on the inner parts of the thighs although this could be due to the poor state of the holotype. There are two distinct whitish dots ventrally under the cloaca on the thighs and a fine transversal brown line in the neck as typical in many specimens of Boophis madagascariensis   from central eastern Madagascar, but no trace of a sharply outlined brown marking on the back that is typical for most B. entingae   . We therefore confirm the synonymy of Rhacophorus herthae   with Boophis madagascariensis   which had been proposed already by Guibé (1978). 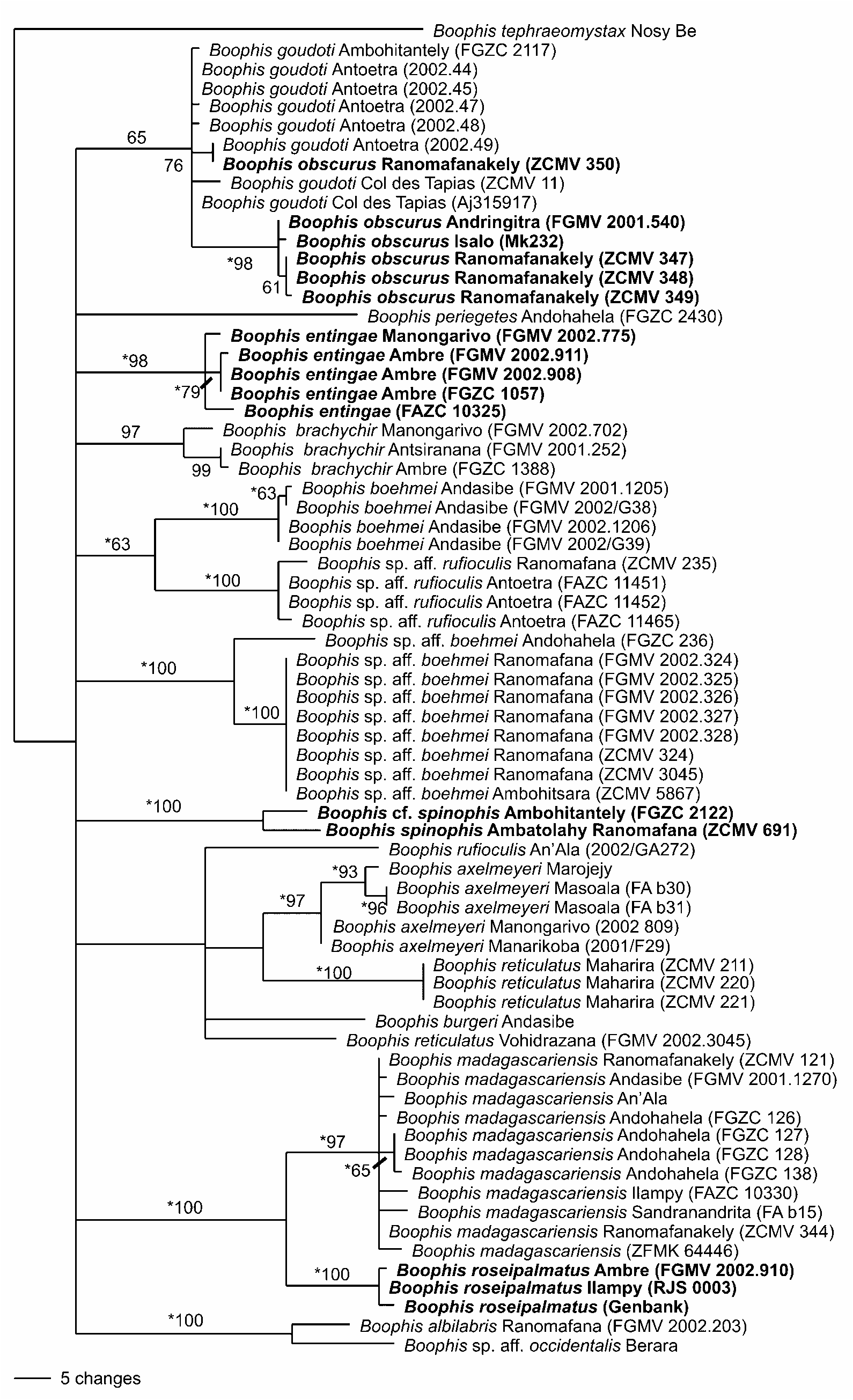 FIGURE 7. Maximum parsimony 16S rRNA phylogram of species of the Boophis goudoti group. From 510 total characters, 340 were constant and 130 parsimony informative. MP searches retained 3681 trees of which a strict consensus is shown. Consensus support values higher than 50, from 2000 bootstrap replicates, are shown; an asterisk indicates Bayesian posterior probabilities equal or higher than 95%. Species newly described or resurrected herein are in bold.