Zwick, Peter, 2016, Australian Marsh Beetles (Coleoptera: Scirtidae). 9. The relations of Australasian Ypsiloncyphon species to their Asian congeners, additions, mainly to Petrocyphon and Prionocyphon, and a key to Australian genera of Scirtinae, Zootaxa 4085 (2), pp. 151-198 : 167-172

The generic name („Saw-Cyphon“) alludes to the antennal serration which is more distinct in males than in females. It is very variably expressed among the long-recognized Holarctic species, some males exhibit strong, others weak, indistinct serration. However, the original description of P. serricornis ( Müller 1821, my translation) focused on a special quality: „the peculiar build of the basal antennal segment. Namely, this is very large, almost circular, compressed, upper side slightly convex, excavated below; the second segment is very small, rounded, inserted in that excavation on the lower side near the origin of the first under which it rests like under a small plate where it is mostly completely concealed; the third even much smaller, barely visible at high magnification“ ( Fig. 40 View FIGURES 38 − 40 ). The enlarged plate-like scape has a sharp medial edge.

It seemed easy to recognize a member of genus Prionocyphon but recent discoveries in Australia and the Neotropics ( Watts 2010b; Klausnitzer 2012) revealed traits previously unknown in the genus. Also, several genera were discovered or redescribed that have the same ( Mescirtes , Prionoscirtes ) or very similar (Prionocara) antennal modifications. Efforts to distinguish the four genera ( Ruta 2010; Klausnitzer 2010, 2011a, b, 2012) showed that modified (saltatorial?) hind legs separate Mescirtes , Prionoscirtes , and Prionocara from Prionocyphon . Mescirtes differs additionally from Prionocyphon by its head structure: there is a deep and wide subantennal groove ( Zwick 2015d). Information about this detail in the other two genera is missing. Among the genera in question a pore with hair tuft on female sternite 5 is reported only in Prionocyphon . However, similar modifications on sternites occur in, e.g., Microcara ( Klausnitzer 2009b) , Nothocyphon lanceolatus Zwick, 2015a , and Ora spp. ( Libonatti 2014). It is uncertain if the structure is apomorphic.

The derived transformation of the antennal base characterizes a clade comprising Prionocyphon , Mescirtes , Prionoscirtes , and probably also Prionocara. Except for the antennae and the female prehensor the general morphology of Prionocyphon serricornis is not much different from the genus Microcara . Also the male terminalia which include a large U-shaped S8 conform with the basic Microcara - type ( Nyholm 1972). Most of the Australian species and the other genera in the clade exhibit more derived character expressions, e.g., the clypeal lobes, the reduced S8 and male genitalia modified in various ways. It appears to me that the historical name Prionocyphon is tied to one of the most archaic representatives of the clade, the three younger names to derived representatives of the group. There is no synapomorphy of Prionocyphon as presently understood. Its taxonomy is in flux, and new concepts are required.

I restrict myself to the alpha-taxonomy of Australian species. I include only those species in Prionocyphon whose subgenal ridge ends freely and is separated from other structures on the lower face of the head by a small gap (the so-called buttonhole; similar to Figs 112−114 View FIGURES 105 − 114 ). However, most species are not very similar to the type species which is suported by sequence data ( Cooper et al. 2014: Fig. 1 View FIGURES 1 – 7 ). Selected structures are compared ( Table 2), and two are discussed here:

Like many other marsh beetles male Australian Prionocyphon possess styles. Styles were also observed in two Neotropical species ( Klausnitzer 2012), and several Australian species have complex armatures in the wide ejaculatory duct. Both traits seem to distance the Australian species from the type species. Contemporary descriptions and illustrations of P. serricornis (e.g., Klausnitzer 2009b) focus on Northern Hemisphere taxonomy and do not mention these structures. However, they were described and illustrated in morphologically oriented papers. Nyholm (1971, 1972) distinguished „Seitenplättchen“ or „Basalsklerite“ from „Lateralgriffel“ which have similar basolateral positions on the tegmen. Nyholm seems to have distinguished them by shape, but I regard them as homologous. Nyholm (1971, 1972) also described how in P. serricornis the opening of the ductus is on both sides connected to the inner face of the parameres by a very voluminous, partly sclerotized transversely folded ('concertinated') membrane which locally resembles spines. This tough membrane seems to be homologous to endophallic armatures occurring in Australian species and renders separation of the penis and tegmen difficult during dissection of P. serricornis . Fig. 41 View FIGURE 41 shows this concertinated membrane, together with the rudimentary styles of P. serricornis .

Heterogenous abdominal setation is a newly observed character. In most Scirtidae the pilosity on abdominal sternites is uniform, with numerous socketed setae on all segments in comparable density, except reduced above the femora. In heterogenous abdominal pilosity, large socketed setae are sparse on anterior sternites. Between them stand many very small setae with particularly large insertion points, presumably sensilla. There is a dense aggregation of such sensilla on the abdominal intercoxal process and the area immediately behind it, in the middle of S3. Sensilla are numerous on the sides of S3+4, there are fewer on S5, none on S6+7. However, large normal setae on S6 and especially on S7 are much denser than on the anterior sternites ( Figs 42−44 View FIGURES 42 − 44 ).

Females of P. latusmandibularis were recognized by their enlarged mandibles, while the presumed female of P. uncatus was taken with males. Other females could not be assigned to particular species, but they were preliminarily assigned to two morphotypes. Whether each morphotype includes one or several species is unknown. All females had normal (not connate) sternites with heterogenous setation. A circular ring in the middle of sternite 5 surrounded a small field with microscopic pores in it, and there were no distinct hairs around it. Sclerites of S8 had closely adjacent or connected front ends. The ovipositors with slender gonocoxites and long tubular stylites were unmodified. No female had large toothed bursal sclerites like the Palaearctic species have ( Nyholm 1971; Yoshitomi 2005; Klausnitzer 2009b). A short area of the gonoduct with annular folds or fine internal spinules represented the prehensor. The small spherical bursella had no obvious surface structure and no sclerites in its wall. Two kinds of bursal sclerite were observed:

Watts (2010b) questioned whether all the species that he had assigned to Prionocyphon truly belonged there. A few were indeed misplaced (Watts 2014; Cooper et al. 2014); I leave formal taxonomic steps to C.H.S. Watts who is presently working on them. Despite this, the Australian fauna is exceptionally rich. Australian Prionocyphon radiated remarkably, involving loss of some characters as well as evolution of new ones. It may seem reasonable to subdivide the Australian taxa, or to separate them from “core” Prionocyphon . However, Table 2 shows numerous overlapping character combinations. No matter where a limit between Australian species were drawn, closely related species would be assigned to different groups. I therefore leave all species in Table 2 in the genus Prionocyphon . A new generic diagnosis for the world fauna is a task for the future.

Three informal species groups are recognized. Species descriptions below are grouped by shared characters and follow the sequence of species in Table 2. FIGURE 41. Prionocyphon serricornis (Müller), penis and tegmen, connected by the endophallic armature of folded cuticle; specimen from Schlitz, Germany. The arrows point to the rudimentary styles. Not to scale. 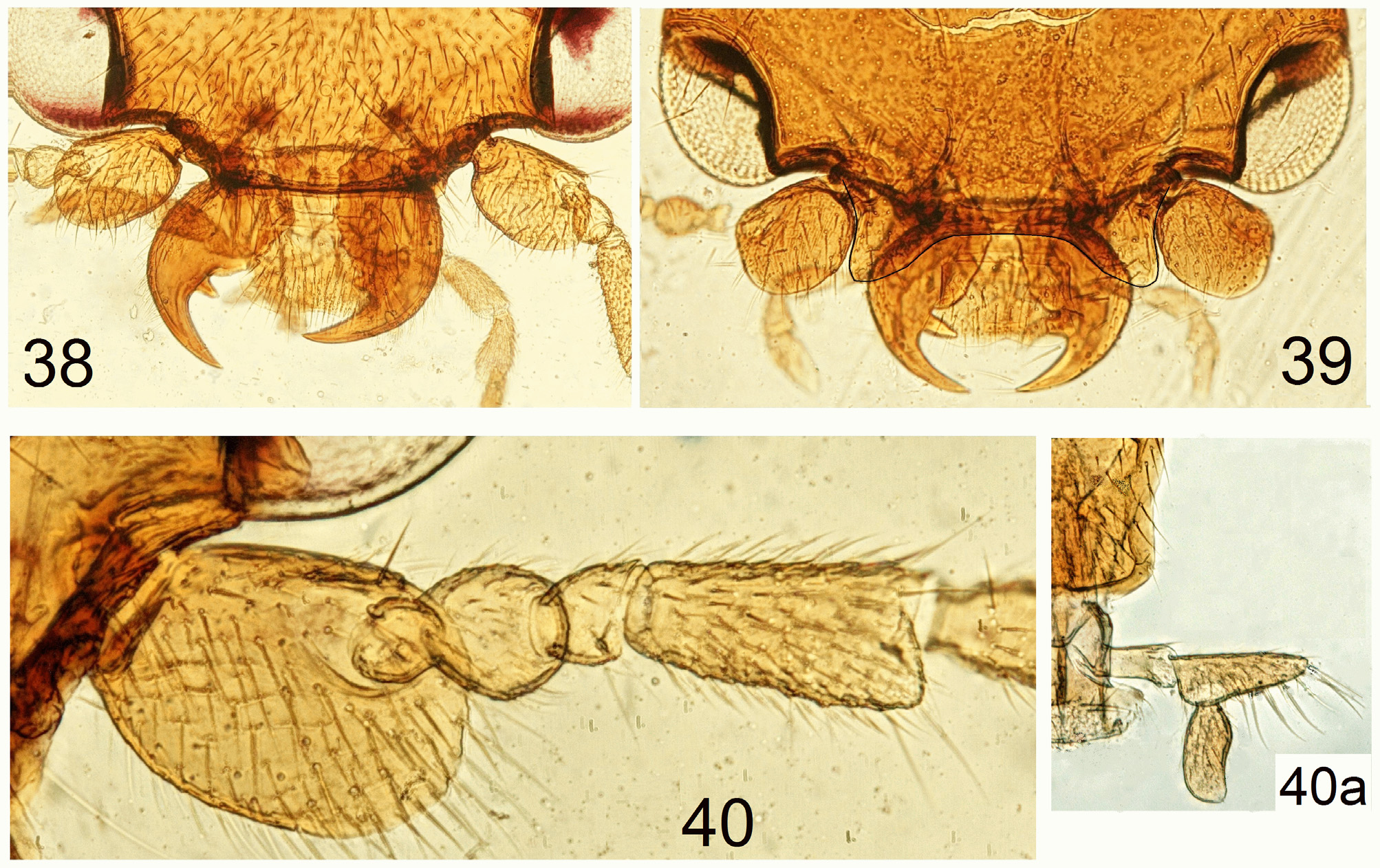 FIGURES 81 − 86. Male genitalia of Prionocyphon yarraensis Watts. 81, T 8; 82, T 9; 83, S 9; 84, trigonium and parameroids in side view; black arrow points at opening of sperm duct (sd-o); 85, one paramere with half of the transverse bar between the halves, the broken end placed near where the undamedged components were originally connected; wide open arrow indicates direction of view of Fig. 86; 86, dorsal view of the intact genitalia (modified from Watts 2010 b: fig. 42). Compare text, also for abbreviations. 81 − 83 and 84, 85 to the same scales, respectively; 86 not to scale.