Zwick, Peter, 2016, Australian Marsh Beetles (Coleoptera: Scirtidae). 9. The relations of Australasian Ypsiloncyphon species to their Asian congeners, additions, mainly to Petrocyphon and Prionocyphon, and a key to Australian genera of Scirtinae, Zootaxa 4085 (2), pp. 151-198 : 154-157

Technical notes. The types sit on inverted minuten pins pushed into the mesothorax from below, slightly laterally, and the mesoventral process remains visible. The abdomen and male parts of the holotype are in a semitransparent film of glue on a card, only the penis needed to be removed, cleared of adherent tissue in KOH and mounted in Euparal. The detached empty female abdomen had been glued on a card. Some tissue next to it was cleared in KOH and mounted in Euparal.

Male. Apodemes of T8 only half as long as those of T9. S8 rod-shaped and long, it must have extended foward into segment 4, similar to Fig. 3 View FIGURES 1 – 7 . Caudally it supports rudimentary plate of sternite. Narrow forked tegmen and large S9 resembling intermediate between U and V as illustrated in original description.

In dorsoventral view ( Fig. 1 View FIGURES 1 – 7 ) penis resembles a popsicle shaped like a sugar loaf. Parallel sclerites of the long pala end abruptly at a structure resembling the eye of a needle. Caudally from this point sclerites embedded in flat general surface, remaining sharply delimited for a short distance, distally turning into stripes which are more strongly pigmented than surroundings. Stripes converging, meeting and ending shortly before reaching nippleshaped trigonium. The raised little nipple stands at about 13% of total penis length from the regularly tongueshaped apex. A narrow medial seam on each of straight sclerites of pala widens, lies over needle-eye, and then turns to outside.

Female. Ovipositor unmodified, bacula articulating with the long and slender gonocoxites. Gonostyli slender drums with apical sensilla. Edges of S8 converging and merging to a slender unpaired rod about half as long as apodemes of relatively wide T8 ( Fig. 2 View FIGURES 1 – 7 ). No vulvar sclerite and no dictyon on accessory gland.

Notes. Neither Y. chlorizans   nor Y. micans   exhibit the greenish sheen originally ascribed to them. Probably it resulted only from the kind of illumination used ( Klausnitzer 1973).

The type and the other Asian species examined (see below) as well as all Australian members agree in the structure of the mesoventrite. In a key to Cyphon   -like Scirtidae ( Ruta 2009)   the narrow mesepimeron distinguishes Ypsiloncyphon   . The mesoventral process of the illustrated Y. jaloszynskii   ( Ruta 2009: fig. 19) widens, but less than in the other Asian species examined by Ruta (2004) and myself. Klausnitzer (2009) calls the mesoventral process "breit abgestutzt und beborstet". The caudal widening of the mesoventral process may be a generic character not generally considered in the past but recently described in a number of Oriental species ( Klausnitzer 2015b).

The maxillary palpus of Y. chlorizans   and of the other Asian species I studied as well as those recently named by B. Klausnitzer (2015b) is derived. Ruta (2007) did not mention the number of segments when he described the palpus as “fusiform, with broadened, globular proximal half, and narrow, tempered apex” which fits Fig. 4 View FIGURES 1 – 7 . In Table 1 the figure 3 stands before the name of species known to have a three-segmented palpus. Possibly even more Asian species are similar in this respect.

S8 and S9 of Y. chlorizans   were originally described as S9 and presumed T9, respectively. Their large size and forward prolongation into anterior sternites are also observed in other species of group 2 ( Fig. 3 View FIGURES 1 – 7 ) and are apomorphic. S9 varies within the Scirtinae   but in the groundplan ( Zwick 2015c) S8 is a small structure. It tends to be strongly reduced, often consisting only of weak sclerites arranged like the letters V or Y. In a number of genera S8 is absent, also in all Australasian Ypsiloncyphon   -species.

monophyletic units, compare the text. Probable apomorphies which are known only in a few species are identified by:

#: Female S8 with apodemes connected to form an open frame.

Earlier descriptions of the penis of Y. chlorizans   ( Klausnitzer 1973, 2009) are incorrect. The needle-eye described above is homologous to the axil-like opening observed in Australian species where the parameroids separate from the trigonium ( Zwick 2014, e.g., figs 77, 101, 104). The plate to which the trigonium is attached is formed by the fused parameroids which is also suggested by the free apices observed in several species ( Yoshitomi 2015, e.g., figs 4, 6).

In most Scirtinae   the lateral sclerites of female S8 are more or less embedded in the segment. In Ypsiloncyphon   they form freely projecting apodemes which appears to be derived. Different conditions occur. I regard the unpaired rod to which the apodemes of female S8 merge as apomorphic. Figures by Yoshitomi (2015) show this in all known Asian females which are asterisked in Table 1. 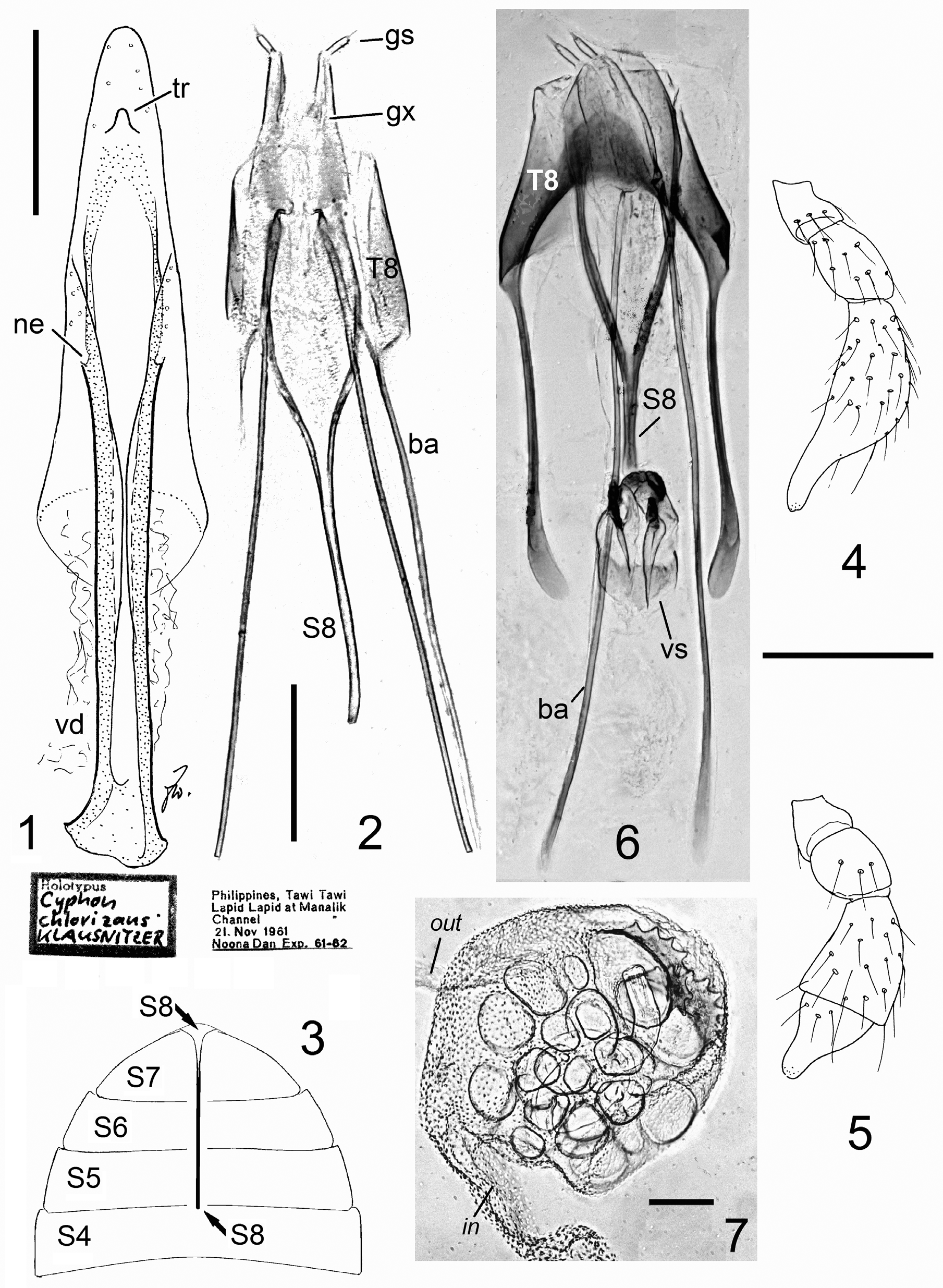