Dragan P. Chobanov, Beata Grzywacz, Ionuţ Ş. Iorgu, Battal Cιplak, Maya B. Ilieva & Elżbieta Warchałowska-Śliwa, 2013, Review of the Balkan Isophya (Orthoptera: Phaneropteridae) with particular emphasis on the Isophya modesta group and remarks on the systematics of the genus based on morphological and acoustic data, Zootaxa 3658 (1), pp. 1-81: 5-8

There are few attempts to classify the species of Isophya  in groups according to their morphology, bioacoustics,

the mentioned studies do not include all described taxa and more or less deal with regional fauna. The present study

has not the aim to reconstruct the relationships within this genus; instead it aims to classify the Balkan

representatives of Isophya  using some basic phylogenetic information. For this purpose we used the earlier

published data (see the above citations), together with newly collected information to get idea on the species

1. Tegmen (reduced fore wing transformed into a sound-producing organ) ( Figs 31–79). According to the specialisations for sound-production the form and venation of tegmina vary between species and may reflect either synapomorphies or convergencies. Males: (1) relative length of tegmina (compared to the stridulatory area and body length); (2) position of veins in relation to one another (see Fig. 32 and compare Figs 31–55)—the level of compression of tegmina through reduction the apical part of the Costo-Medial area of the wing and approximation of veins in the sound producing Medio-Anal area, which may result in changes in the form of tegmina becoming bulged and membranous; (3) development of the “stridulatory” vein CuP (Cubitus Posterior or the hind Cubital vein) and structure of the stridulatory file (pars stridens). Females: (1) position of veins in relation to one anotherparallel or reticulate; (2) structure of the secondary stridulatory apparatus—with one to three –four basal rows of teeth. The plesiomorphic character states in males include long, flat, coriaceous tegmina with relatively small stridulatory area and widely separated veins in the Medio-Anal area, while apomorphies express in different levels of compactization. Usually the compactization of male tegmen corresponds to the development of a net-like venation and a lower number of stridulatory filerows in females.

2. Colouration (compare Figs 1–30View FIGURES 1 – 18View FIGURES 19 – 30). The ancestral colouration is usually more or less uniform green with light lateral and ventral body surface and sometimes dark-green or brownish dorsal pattern. In some advanced groups a variegated colouration may occur, reaching development of melanism (typical for the relatives of I. speciosa  and rare in other groups).

Bioacoustics. Male calling song is amongst the most important species-specific features of the bioacoustically

in Isophya  , consisting of single crescending syllables. However, this type of song is not very common in this genus

and is characteristic mostly for not closely related, morphologically specialised species occurring outside the centre

of diversity and (probably) origin of the genus ( Anatolia). The morphological (Warchałowska-Śliwa et al. 2008;

primitive species in the genus are the relatives of I. straubei (Fieber, 1853)  (e.g. I. hospodar  ) evolutionary followed

by the I. rectipennis  group and possibly also some other groups in Anatolia. Their songs usually contain small groups or phrases of short syllables that may be obscurely crescending or decrescending and this type of song is here considered ancestral. Specialisations resulting from this type may include complication of the syllable groups by developing different types of syllables or simplifying the song to single syllables. After developing song of single syllables it may be further changed by elaborating the syllables through modulating the sound producing wing movement and/or arranging the syllables in long sequences.

Karyology. A recent review of the karyology of Isophya  involving 25 taxa (Warchałowska-Śliwa et al. 2008) showed the significant correspondence of the chromosomal characters with the morphological grouping proposed.

All but one species have a karyotype of 2 n= 31 (male) / 32 (female) acro- to submetacentric chromosomes with an X0/XX mechanism of sex determination. This karyotype was suggested being ancestral for most species of tettigoniids (e.g. White 1973; Warchałowska-Śliwa 1998). Only one species, I. hemiptera  , from the northern Caucasus shows a neo-X/neo-Y sex determination system (Warchałowska-Śliwa and Bugrov 1998).

Morphotypes of the X-chromosome of species with X0/XX sex determination have been divided into three main categories (type 1 —acrocentric; type 2 —subacrocentric and type 3 —submetacentric) that characterise different groups of morphologically similar taxa (Warchałowska-Śliwa et al. 2008). The few examples of controversy between morphological and cytotaxonomic grouping (in the I. pyrenaea  group as defined by Warchałowska-Śliwa et al. 2008) are herewith resolved by further splitting the group into two complexes according to new morphological and acoustic data taken into consideration (see below). 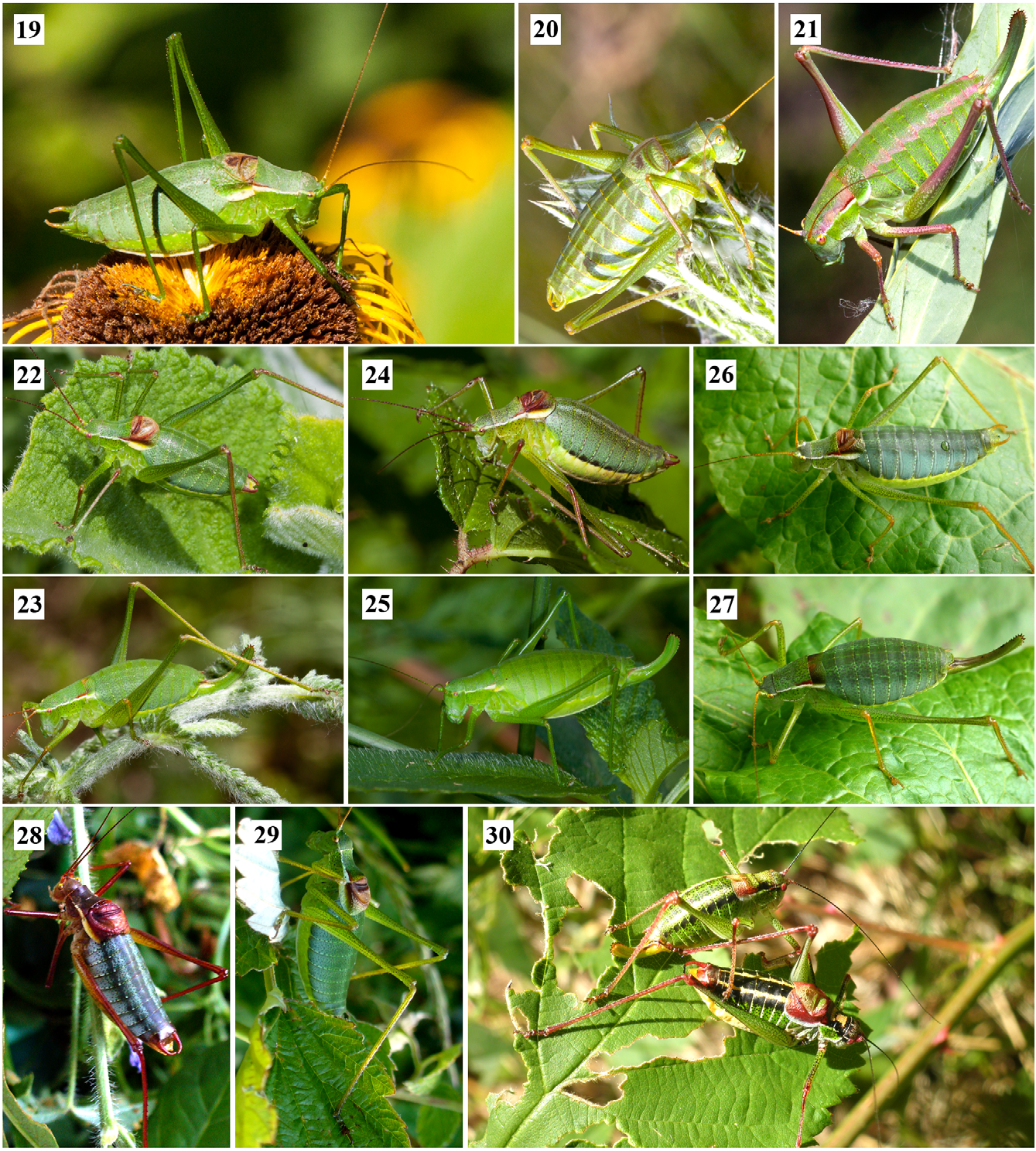 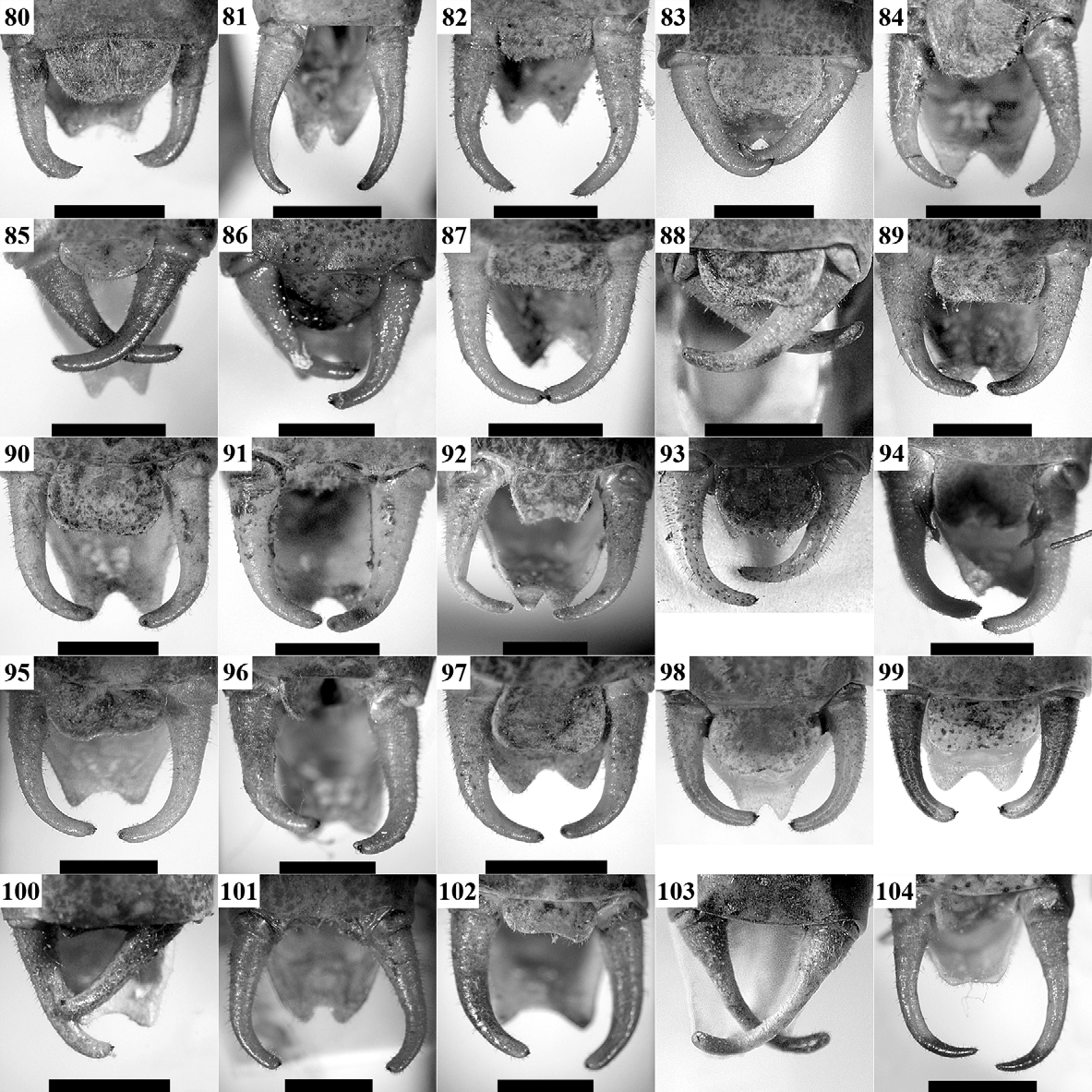