Diagnosis. Neoplecostomus pirangaensis differs from all congeners by the much-reduced dermal platelets on the abdomen, devoid of developed odontodes, between the insertions of the pectoral and pelvic fins (vs. abdomen with conspicuous, small dermal plates between insertions of pectoral and pelvic fins, forming a hexagonal thoracic shield surrounded by naked areas). Neoplecostomus pirangaensis can also be distinguished from all congeners, except N. botucatu and N. paranensis , by the complete absence of vestiges of the adipose fin or azygous plates (vs. vestiges or adipose fin moderate- to well-developed and/or azygous plates present). The new species differs from N. botucatu by the absence of conspicuous dark spots all over the body and the possession of dorsal bands in juveniles, and almost black dorsum in adults. It differs from N. paranensis and N. doceensis by the larger and less numerous teeth (6–9 in premaxilla and 6–10 in dentary, vs. 10–33 and 12–35, respectively). Additionally, the new species differs from the sympatric species, Neoplecostomus doceensis , by the absence of enlarged, fleshy folds between the dentaries. Furthermore, the new species is distinguished from all other species except N. canastra , N. corumba , N. selenae and N. yapo , from the upper Rio Paraná basin, by having a larger orbital diameter (12.0– 13.3% HL, vs. less than 12%).

Description. Morphometric and meristic data in Table 3. Standard length of measured specimens: 33.8–82.7 mm SL. See fig. 3 for general body aspect. Body relatively short and depressed. Greatest width at cleithrum, narrowing posteriorly to caudal peduncle. Dorsal head profile gently convex, elevating from tip of snout to behind of parieto-supraoccipital tip, then horizontally to dorsal-fin origin, then descending to least depth of caudal peduncle. Greatest body depth at pelvic-fin origin. Trunk and caudal peduncle dorsally rounded in cross section; body ventrally flattened to anal-fin origin, then rounded to caudal fin. Dorsal body surface completely covered by plates, except for naked area around dorsal-fin base. Keels along each plate of lateral series absent. First plates of mid-ventral series wider than naked area between them. Snout without plates and odontodes just at its tip. Lateronasal plate absent. Ventral head surface naked except by a plate bearing odontodes in front of gill opening. Canal plate, the only plate on ventral side of head, ventrally to last postrostral plates, simple, not divided. Abdomen with inconspicuous, very small platelets between pectoral- and pelvic-fin insertions, separated from each other by large area of tissue, not forming an abdominal shield, typical for Neoplecostomus ( Fig. 4 View FIGURE 4 ).

Color in life. Ground color of dorsal surface of head, trunk and fins of freshly collected specimens almost black, with scattered lighter spots in place of usual transverse light brown to yellowish tan bars of other species. Color pattern almost unchanged after one year of preservation in alcohol.

Etymology. The specific name pirangaensis is a Latin noun meaning being located or having connection with the Rio Piranga basin, where the species occurs. The Rio Piranga is one of the two rivers that form the Rio Doce itself. The other (Rio do Carmo) has been severely damaged by a disaster with iron ore tailings in November 2015 ( Salinas, 2016; Garcia et al. 2017).

Distribution. Neoplecostomus pirangaensis is known from two localities: in the Rio Piranga, a few kilometers of its headwaters just below of a small hydroelectric power plant, and from the ribeirão Guarará, a left tributary of Rio Piranga, municipality of Santana dos Montes ( Fig. 7 View FIGURE 7 ).

Conservation status. Since 1999, the team of UFJF has made extensive surveys in the upper Rio Piranga and Neoplecostomus pirangaensis was recorded in only two localities with low abundance, the Rio Piranga itself and Ribeirão Guarará. The human activity and potential threat to the species in the region are the same as described to Pareiorhaphis togoroi .

The area of occupancy (AOO) of the species was estimated based on two localities (see above) multiplying by grids of 4 km 2 totaling 8 km 2 (B2). Human activities threaten the habitat welfare (biii) of the only two localities where the species occurs (biv); hence, Neoplecostomus pirangaensis was categorized as an critically endangered (CR) based in the following criteria B2b(iii, iv) according to the International Union for Conservation of Nature (IUCN) categories and criteria ( IUCN Standards and Petitions Subcommittee, 2017). 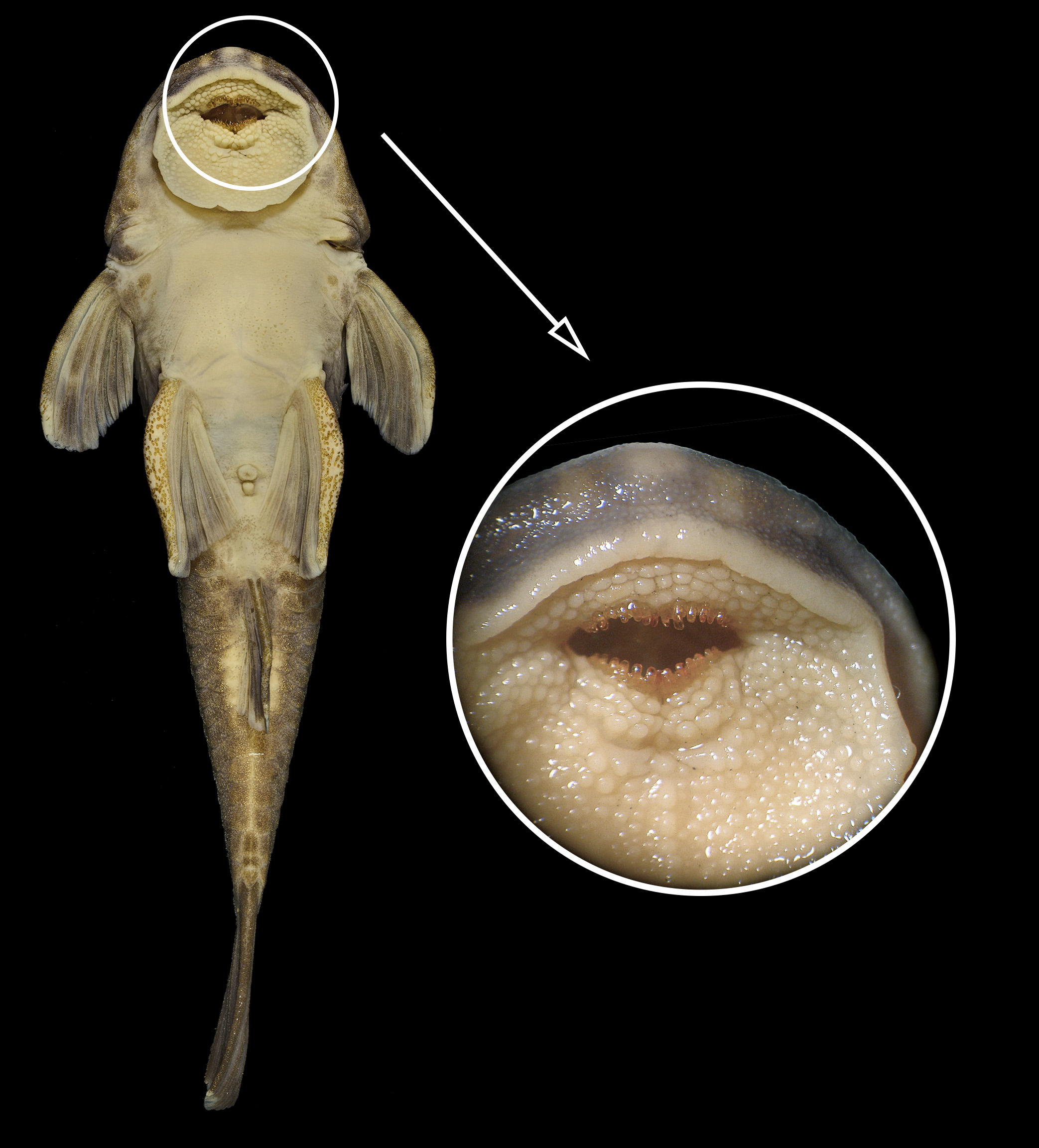