(There are no synonyms, as the species has not been seen previously or at least never recorded in the literature).

Diagnosis. No upraised swollen scales on dorsum; no cutaneous fold at angle of mouth; no fringe of scales on posterior border of thigh and sides of base of tail; side of head and neck without projecting fringe-like scales; prominent fold on lateral sides of body, separating dorsal and ventral scales; dorsal scales subequal, smooth in general appearance, with upturned mucros when viewed from the side under magnification, homogeneous, not keeled; no enlarged scales along flanks; nasals not in contact and separated by 1–3 small scales; tail 106–119 percent of snout-vent length; no spinose scales on neck or back of head; both sides of third and fourth toes and one side of second toe strongly fringed; suborbital scales small and equal in size and never elongate; nostril not visible in entirety when head viewed from side; supralabial scales separated from eye by 3–4 rows of scales; about 30 lamellae under fourth toe; width of space between nostrils less than one half of distance between nostril and preocular ridge; about 30 scales from eye to eye across head. Snout-vent length (mm) 65–75, tail 69–89 (tail = 106–119 % body length).

with very small scales, smaller than those of ventral surface of lower jaw ( Fig. 4View FIGURE 4 k, 4 l); very small, granular scales on sides of throat behind level of angle of mouth. Body: A prominent fold along sides of body, separating dorsal and ventral scales; dorsal scales of body juxtaposed, approximately uniform in size, swollen in centers, not keeled, but viewed from the side under magnification, each scale with sharp mucros extending upwards from center of scale at approximately 90 °, approximately 66–68 across widest part of back (no two observers likely to count exactly the same number) (Figs. 3 e, 3 h); a prominent fold along length of body separating dorsal scales and much smaller, sharply keeled lateral scales; venter with smooth, quadrangular scales of uniform size (Fig. 3 b – 3 d), approximately 38 across widest part of abdomen. Tail: Proximal dorsal tail the same color as dorsal body scales, these scales roughly the same size as dorsal body scales, but more quadrangular, juxtaposed, the center of scales with upward-directed sharp points (Fig. 3 f); distal half of tail black, scales subimbricate, prominently keeled, with sharper, more prominent points as are those of sides of entire length of tail; scales of dorsal and ventral tail arranged in rings of four rows of scales, presumably equivalent to each caudal vertebra, but far less distinct as compared with e.g., Laudakia  ; proximal ventral tail same color as ventral body and limbs, distal part black, ventral surface of anterior part of tail dirty white with aquamarine blue sheen, scales similar in appearance to dorsal tail scales; tail length 89 mm, 119 % of snout-vent length (Fig. 3 b – 3 d). Limbs: Dorsal and ventral surfaces of limbs similar in color to those of body, but dorsal limbs with metallic sheen; scales of thigh and shank all prominently keeled, those on outer surface of thigh giving the appearance of forming a slight fringe (Fig. 3 f). Second and third toes and fingers with long lateral fringes on both edges; 30 lamellae under fourth (longest) toe. (Fig. 3g).

Habitat ( Fig. 2View FIGURE 2). The substratum on and in which the species is found is wind-blown sand, to which the morphology, and especially the fringed digits and nostril valves, are well adapted. The immediate habitat lies at the south-easternmost edge of the Dasht-e Lut, a semi-enclosed basin, surrounded by mountains, similar to such basins throughout southern Central Asia. The area in which this species lives is called Rig-e Yalan (Mega Dune). The elevation of the area from which the specimens were taken was about 700–1000 meters above sea level with high elevated dunes with height of about 400 meters in some parts. Within the Dasht-e Lut, wherein Mega Dune lies, is the hottest point in the world. The surface temperature in warm seasons goes up to 70.7 °C (as recorded by NASA) and in cold seasons and at night it decreases to - 10 °C (reported by collector). At the time that specimens were taken the lowest and highest daily air temperatures were 15 ° and 30 °C, respectively.

Thus far, nothing is known of the species’ behavior or ecology. 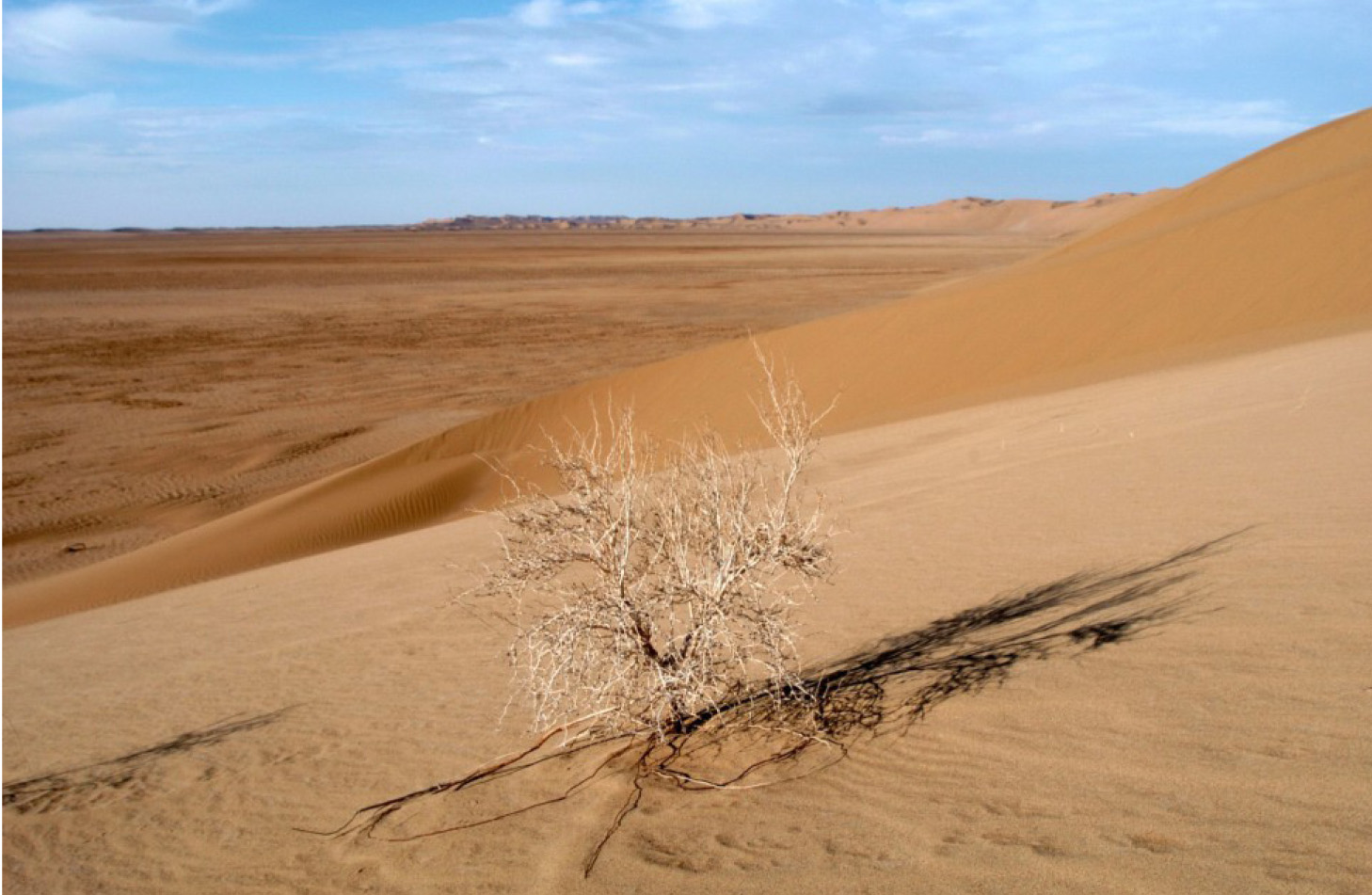