Species concept. Our concept of A. dexingensis   is based on examination of the female holotype and one remaining female paratype (FAFU) from Jiangxi Province, China as detailed by Peng et al. (2017).

Remarks. Among the species we recognise from China, females treated as A. dexingensis   are very similar to those of A. shichengensis   , which have the mesoscutal lateral lobe dorsolongitudinally setose and sculptured ( Fig. 23E View FIGURE 23 : arrow) similar to A. dexingensis   females ( Fig. 4D View FIGURE 4 ), but the profemur abruptly angulate apically ( Fig. 23H View FIGURE 23 ) rather than having a spine-like denticle apically (cf. Fig. 9A View FIGURE 9 : arrow). Females of A. formosanus   have an apically spine-like denticulate profemur ( Fig. 9A View FIGURE 9 : arrow) similar to A. dexingensis   females, but have a differentiated, bare and smoother, more minutely mesh-like coriaceous, dorsolongitudinal region anterior to the posteromedian carina ( Figs 8B, D View FIGURE 8 ). Females of A. dexingensis   have the mesoscutal lateral lobe distinctly roughened, more-or-less uniformly reticulate-imbricate to reticulate-rugose, and setose anterior to the posteromedian carina ( Figs 4B, D View FIGURE 4 ) (see also under A. shichengensis   ). Additionally, A. formosanus   females always have a comparatively broad hyaline cross band with entirely white setae and with the apical margin of the band broadly curved similarly to the basal band ( Figs 8G, H View FIGURE 8 ), whereas females of A. dexingensis   often have at least a few dark, isolated setae medially within the cross band ( Fig. 4G View FIGURE 4 ) and sometimes a more-or-less complete band of dark setae ( Fig. 4I View FIGURE 4 ); and then the cross band is comparatively narrow and/or with the apical margin distinctly angulate medially relative to the basal margin ( Figs 4H, I View FIGURE 4 ). Finally, the scrobal depression of A. formosanus   females ( Figs 8C, E View FIGURE 8 ) usually has slightly better delineated (more angulate than rounded) dorsolateral margins than does the scrobal depression of females we identify as A. dexingensis   ( Figs 4C, E View FIGURE 4 ), as noted by Peng et al. (2017). Most females we identify as A. dexingensis   are also somewhat smaller, only about 2.5 mm in length, than most observed A. formosanus   females, which are usually at least about 3.5 mm in length, though a couple of observed females of both species are similar in size to typical females of the other species. Even though body size overlaps among females of the two species, the size variation at least demonstrates that the mesoscutal lateral lobe sculpture and setal pattern is not size correlated. 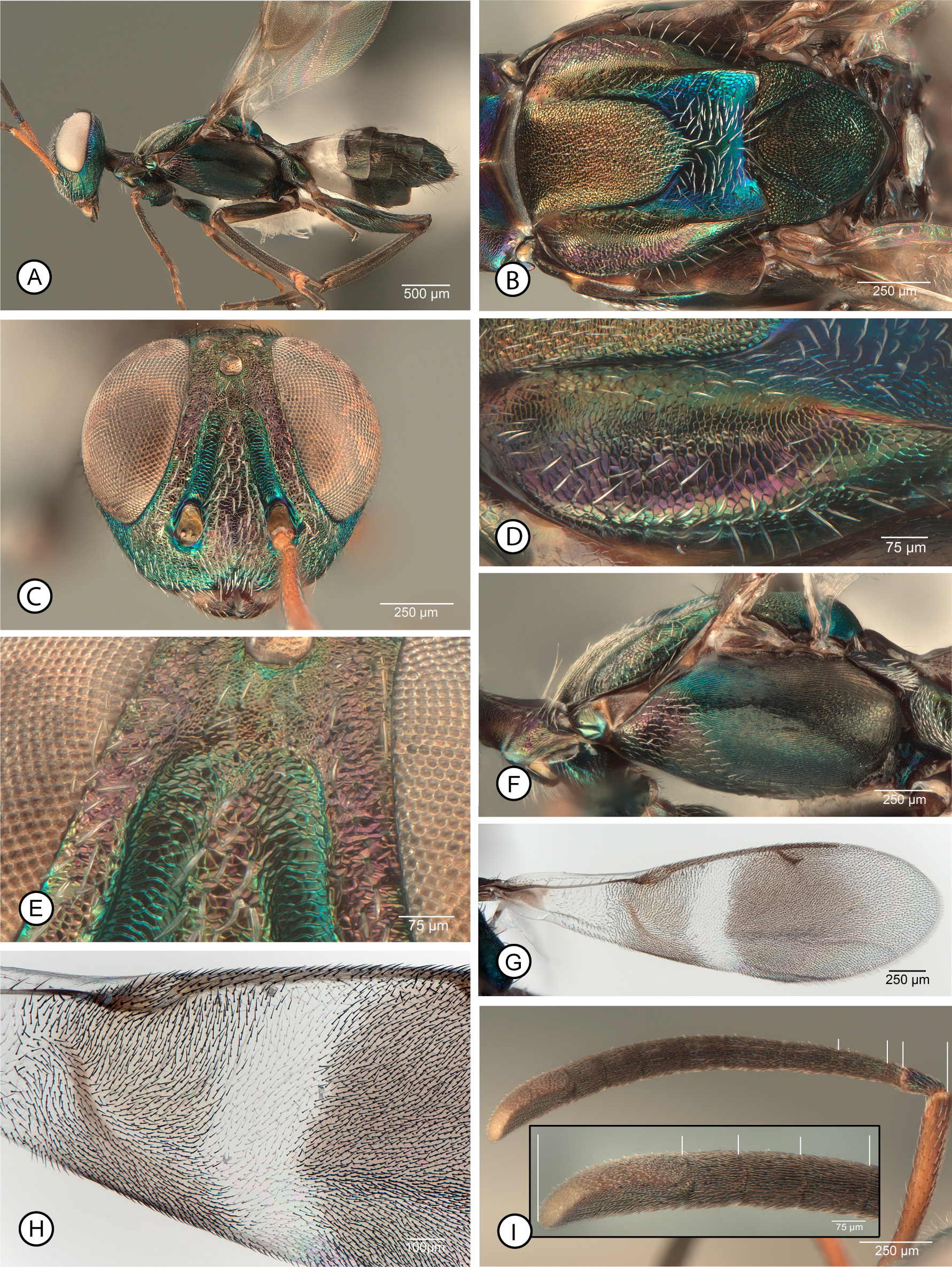