Species concept. Our concept of A. colemani   is based on examination of the contorted, disarticulated remains of one of two original syntype females in the USNM labelled “Bangalore | Mysore Ind / 27.VII.09 / LC Coleman | donor No 118 / ex eggs of | Degonetus   | serratus   / Anastatus   | colemani   | ♀ | Type Cwfd / Type | No. 14344 | U.S. N.M.” Images of the other syntype female are available at: www.usnmhymtypes.com/default. asp?Action=Show_Types&Single_Type=True&TypeID=3505.

Remarks. Females of A. colemani   most closely resemble those of A. bifasciatus   , but are differentiated by several features as is discussed under the latter species. In the original description of the female, Crawford (1912, p.7) stated “first joint of the funicle almost twice as long as pedicel” and “clava about as long as first joint of funicle”, but he apparently did not observe the reduced first flagellomere and inadvertently combined its length with that of the second flagellomere for his measurement of the “first joint”, because the combined length of the first two flagellomeres ( Fig. 3D View FIGURE 3 : fl1, fl2) is about twice the length of the pedicel ( Fig. 3D View FIGURE 3 : pdl) and of similar length to the clava. Both Hayat (1975) and Narendran (2009) keyed out A. colemani   primarily by the first funicular being almost twice as long as the pedicel and about as long as the clava, apparently based on Crawford (1912). Because of this error it is possible that Hayat (1975) and Narendran (2009) key the true females of A. colemani   under some other name. In Narendran (2009), females key most readily to those of A. ramakrishnai ( Mani, 1935)   , which are also partly characterised by the profemur having a ventral tooth subapically ( Hayat 1975; Narendran 2009), a similar colour pattern, and a similar setal pattern for the posterior, concave part of the median mesoscutal lobe. However, Narendran (2009: 90) described the convex part of the anteromedial lobe as with “raised reticulations”, which we confirm based on examined females he identified (see further under A. dexingensis   ). 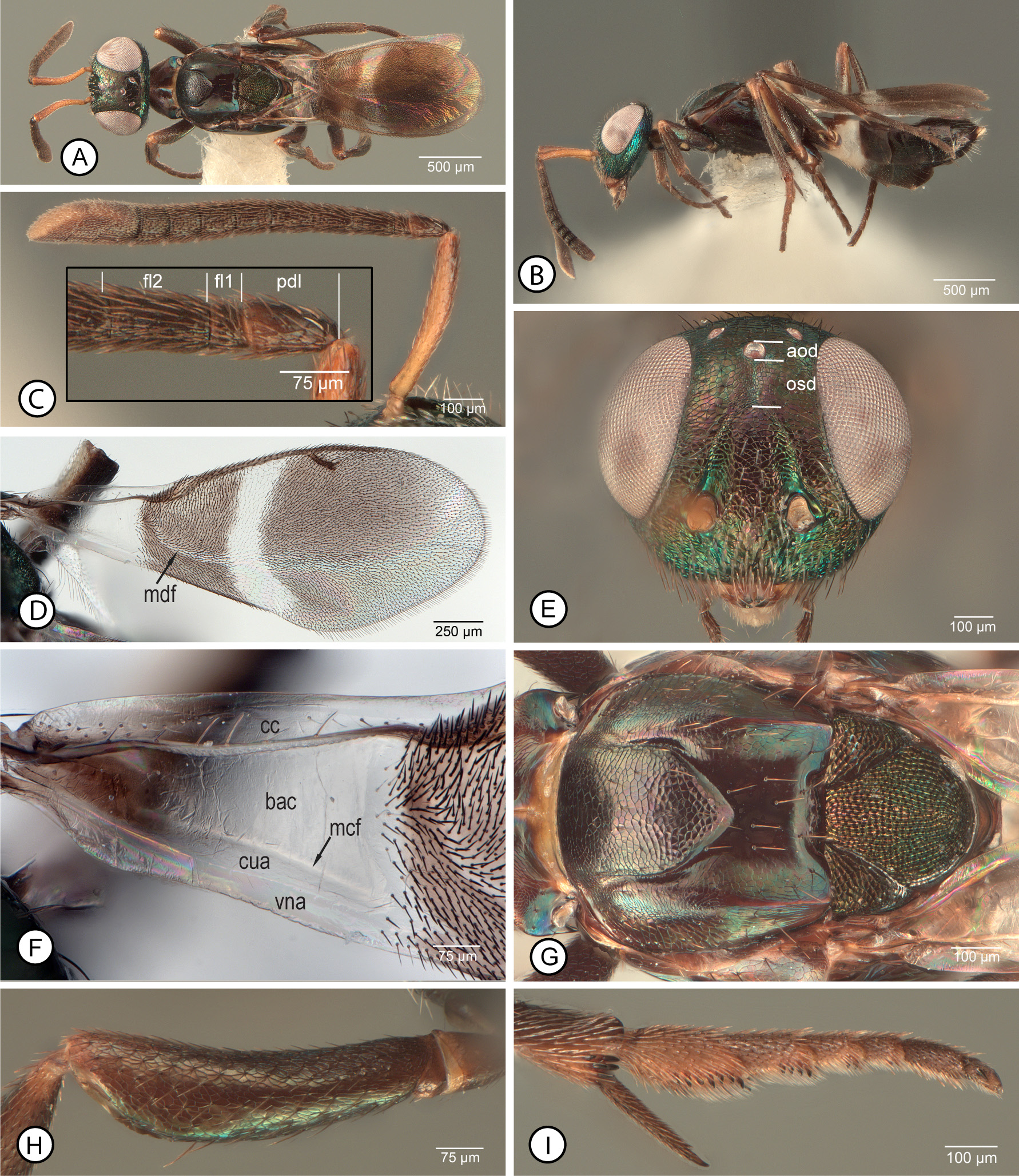