Heptapteridae spermiogenesis. In Heptapteridae early spermatids, the cytoplasm symmetrically encircles the nucleus, which shows diffuse homogenous chromatin, and has a circular outline. The centriolar complex lies medially and close to the nucleus ( Figs. 2 B-C, 3A-B). In R. quelen , the proximal centriole is anterior, lateral and perpendicular to the distal centriole ( Figs. 2B, 2D, 2G), while in P. gracilis it is parallel to the distal centriole ( Figs. 3 View Fig A-C). The distal centriole differentiates into the basal body. It remains associated with the plasma membrane and forms the flagellum ( Figs. 2A, 2C, 2E, 3 View Fig B-3D). In the nucleus, during spermatid differentiation, areas of progressive and homogeneous condensed chromatin are seen among other more diffuse areas. The nucleus does not rotate and the nuclear fossa is not formed ( Figs. 2 F-H, 3B- 3D). In R. quelen , the nucleus becomes slightly elongate ( Figs. 2C, 2F, 2H). The cytoplasmic mass moves to the initial segment of the flagellum and gives rise to the midpiece with a pseudo-cytoplasmatic channel of the future spermatozoon ( Figs. 2H, 3D View Fig ). The few mitochondria initially found around the nucleus are now located around the centriolar complex, near the nucleus, in the midpiece anterior region. They are long, have many cristae and an electron-dense matrix ( Figs. 2E, 2G, 2 I-J, 3C, 3E, 3F). Many vesicles appear at the midpiece peripheral and distal end-regions. These vesicles elongate, fuse to each other and become very long and interspersed with a narrow strip of cytoplasm ( Figs. 2E, 2 G-J, 3D-F). In P. gracilis , the displacement of these vesicles to the initial region of the tail may form a short pseudo-cytoplasmic channel, which does not remain in the spermatozoa ( Figs. 3D, 3F View Fig ). The flagellum exhibits the classical 9+2 axoneme, surrounded by the flagellar membrane that does not form lateral fins ( Figs. 2C, 2H, 3F View Fig ).

Pseudopimelodidae spermatozoa. In the Pseudopimelodidae spermatozoa, the head is formed by the nucleus that has a circular outline, is occupied by highly condensed homogeneous chromatin, and surrounded by a narrow strip of cytoplasm with no organelles ( Figs. 4 View Fig A-B). In the nuclear outline, there is a nuclear fossa of the moderate type containing only the proximal centriole ( Fig. 4 View Fig D-Inset) and part of the distal centriole. The proximal centriole is anterior, oriented end-byend and slightly oblique to the basal body. The flagellum is medial and perpendicular to the nucleus ( Fig. 4C View Fig ). An electron-dense material are found surrounding the centriolar complex ( Fig. 4C View Fig ). The midpiece is long, wide, and slightly asymmetric, with a long cytoplasmic channel. Few elongate mitochondria and many vesicles that are connected to each other and also to the plasma membrane are scattered all over the midpiece ( Figs. 4 View Fig D-F). The single tail or flagellum contains the classical axoneme (9+2), and the flagellar membrane does not have lateral fins ( Figs. 4A, 4C, 4E View Fig ).

Heptapteridae spermatozoa. In the Heptapteridae spermatozoa, the head is formed by the nucleus that does not shows a nuclear fossa. The nucleus is surrounded by a narrow strip of cytoplasm with no organelles. The nucleus is occupied by highly condensed homogeneous chromatin and displays some electron-lucent areas ( Figs. 5 A-B, 6A-B). R. quelen spermatozoa have an ovoid head with an ovoid nucleus ( Fig. 5A), while in P. gracilis , the head and the nucleus are round ( Fig. 6A View Fig ). The centriolar complex remains close to the nucleus and is surrounded by a thin layer of electron-dense material ( Figs. 5A, 5E, 5F, 6A, 6E View Fig ). In R. quelen , the proximal centriole is anterior, lateral and perpendicular to the flagellum basal body - the differentiated distal centriole ( Figs. 5 E-F), while in P. membranous loops at the midpiece end ( Figs. 5E, 6E View Fig ). The single tail or flagellum contains the classical axoneme (9+2), and the flagellar membrane does not form lateral fins ( Figs. 5 C-D, 6H). 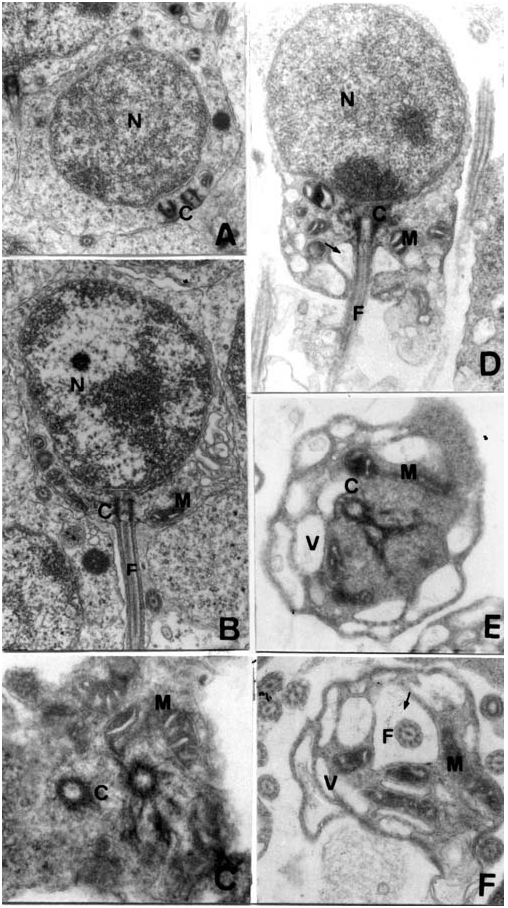 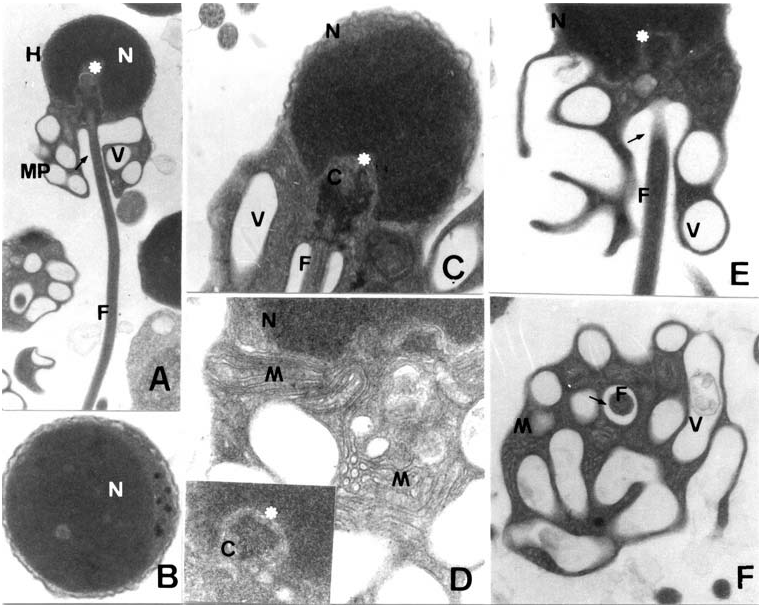 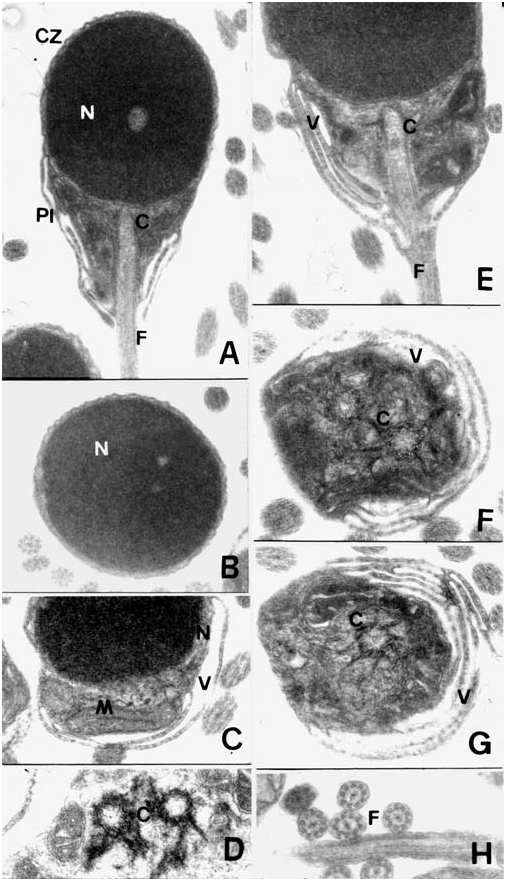