Descriptive notes. Head-body 40-65 cm, tail 35-58 cm; weight 3-10 kg. A mediumsized pangolin, with rounded,olive to reddish-brown scales and pads on forefeet. One pair of mammae. Males larger than females. Head conical and rostrum relatively long and thick. Nose pad color similar to orslightly darker than the pale, grayish-pink skin. Auditory orifice with ear pinna. Eyes small and iris dark. Scaled armor covering the upper face and the whole body, except the belly and inner side of legs. Hairs whitish, very thin and relatively long (longer than 0-3 cm); quite densely imbedded all over the naked skin. Hairs project between scales. 15-18 dorsal scale rows. Scales approximately as long as wide. Width ofscales on the distal part of the body similar to that offirst rows of postscapular scales; scales uniformly olive to reddish-brown, but yellow zones may sometimes appear on individuals. Scales V-shaped, with smooth contour, even in juveniles. Tail length slightly inferior to head and body. On tail, medio-dorsal row ofscales continuous to tip. Ventral part oftail has a narrow, terminal skin pad, due to the absence of a median scale. Forelegsslightly shorter than hindlegs. Five short and curved claws on forefeet, with the third claw less than twice as long as the others; animals walk with wrist folded up and claws perpendicular to ground. Five markedly curved claws on hindfeet, with third claw distinctly longer. Skull 6-10 cm long, V-shaped. 28-29 caudal vertebrae. Diploid number 2n = 38.

Habitat. Main habitat is primary and secondary rainforest (excluding swamp forest), where large trees provide numerous shelters. This species seems able to inhabit perturbed areas such as fragmented forest islands, gardens, and plantations, including near human settlements. It is however absent from zones of extensive agriculture. May occur at high elevations, notably in Lombok Island, Indonesia (1500 m) and Borneo (up to 1700 m); found at lower elevations where co-occurring with the Short-tailed Pangolin ( Manis pentadactyla   ). In its northern range, probably does not occur above 600 m.

Food and Feeding. Myrmecophagous; in Singapore, strictly feeds on ants (including Polyrachis and Anoplolepis) and termites (undetermined taxa). Highly selective on species preyed upon, notably avoiding the genera Philidris, Myrmicaria, and Crematogaster. Ratio between time spent foraging on ants and termites was 67/23%, suggesting that ants might be preferred. Nocturnal, using its excellent sense of smell when foraging. Mostly forages underleaf litter and rotten woods. When feeding, the rostral part of the tongue is rapidly inserted and withdrawn to capture prey. The lingual system is dramatically adapted to preying on ants and termites. Although the flat mandible and weak temporomandibularjoints give limited movementto the jaw, masticatory muscles are well developed; given the absence of mastication in pangolins, they are probably involved in control of oral cavity pressure during feeding. The symphyseal area of the mandibles forms a flat surface where the tongue can slip; extrinsic lingual muscles are attached on ridges present on the internal sides of the mandible. Tongue is attached ventral to larynx and trachea to a characteristically modified xiphisternum (xiphoid process). The latteris relatively shorter than in African species, and ends in an enlarged spade-shaped plate. The first half of the tongue is a tubular structure designated as the glossal tube, the cavity of which is continuous with the oral cavity. The tongue is covered with colorless, viscous mucus, notably provided via the glossal tube. Unique physiology of kidneys, with prominent and very active proximalstraight tubules,is possibly related to the great need to provide the salivary glands with water. Although the tongue has a squamous, stratified epithelium lining, tolerance to stretching appears limited. The stomach has a remarkable, wide distribution of gastrin-immunoreactive cells in the mucous and pyloric glands, suggesting a major, yet unknown, function of those cells in the digestive process.

Breeding. May require mature forests with large trees to provide suitable shelters for raising young. Males have testes in a fold of skin located in the groin (i.e. not descended into a scrotum). Embryo develops in one of the uterine horns. Gestation period is poorly known: a period of 2-3 months has been proposed; placenta is diffuse and of epitheliochorial type. A single young is usually born, but twins have been reported. A birth has been recorded in September. After a few days, young is carried clinging to the tail of its mother. When sleeping, young is protected by the mother’stail curled on the belly. Weaning likely occurs after three months.

Activity patterns. Solitary, mostly nocturnal and semi-arboreal. A very poorly known species. In Singapore, a female with young had shelters in hollows located at the base of large, dead or live trees. Entrances were single or double, and diameter was 13— 24 cm. In contrast, adult males were found resting among dense clumps of grasses such as the cogongrass (I/mperata cylindrical), or on branches of tall trees; they were also observed resting in buildings. Main peak of activity recorded between 03:00 h and 06:00 h, but animals can be active at any time of day (especially subadults) and night. Mean active period was 2-2-5 h/day. A female with young alternated between three shelters 300-500 m from one another, the same shelter being used for a mean period of about nine days. Main walk is quadrupedal, arching its back and raising its tail parallel to the ground. Caterpillar-like walk is used to climb large trunks or branches, with the prehensile tail curled up as a support. Legs, sacrum, and a large part of the tail have a network of arteries divided into numerous small vessels (rete mirabile), possibly facilitating blood circulation during powerful and prolonged muscular contractions such as holding the rolled-up defensive posture, typical of pangolins.

Movements, Home range and Social organization. Almost unknown. Rarely observed in the wild dueto its secretive,solitary, and nocturnal way oflife. In Singapore, a female with young foraged very nearits dens and had a home range of ¢.7 ha. In contrast, males had much larger ranges (mean: c.43 ha). Extent of home range overlap between and within genders is unknown. The female showed a higher level of den fidelity than males, the latter only spending one or two consecutive days at the same resting site. Seems relatively abundant in the southern part of its range, but extremely rare in its northern range.

Status and Conservation. CITES Appendix II. The annual export quota is zero for specimens removed from the wild for trade. Classified as Endangered on The IUCN Red List because of a dramatic reduction of populations in the last 15 years, likely to continue over the next 15 years given the heavy hunting pressure, the pressure moving towards its southern range ( Indonesia) and being driven by the Chinese traditional medicine market. Although protected by national legislation and present in a number of protected areas throughout its range,it is heavily exploited for its meat and its supposed medicinal properties (to cure cancer, notably), a situation exacerbated by continuous destruction ofits habitats. Although the Sunda Pangolin is able to survive in humanmodified habitats, the presence of mature forests with large trees seems to be necessary for breeding success. In Laos, populations have decreased by 90% in the last ten years. Illegally harvested for local or international trade throughout South-east Asia, but exact number is unknown. Much greater law enforcement is needed to limit poaching from protected areas. Since the mid-1980s, a dramatic shift from local consumption towards international trade (to China) has become established; nevertheless, prior trading activities were already intense: e.g. ¢.10,000 Sunda Pangolins were exported from Borneo between the late 1950s and early 1960s. In Vietnam, the majority of hunters sell their live catches to Chinese exporters, with the price per kilogram now exceeding US $ 95. 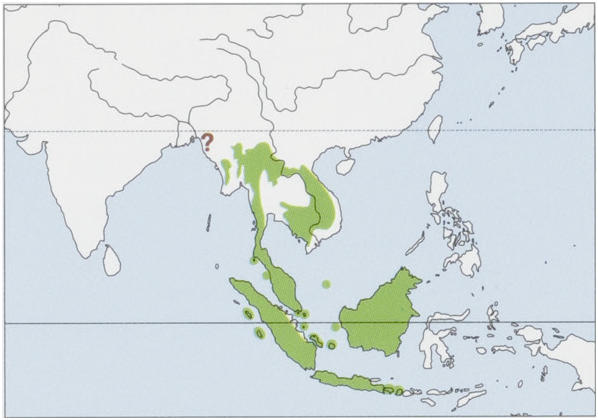 Distribution. Throughout mainland SE Asia, from C & S Myanmar to W & SE Thailand , C & S Laos , Cambodia , C & S Vietnam , and Peninsular Malaysia ; also present in Borneo, Sumatra, Java, Bali, Lombok, and several adjacent small islands. Most likely extinct from E Bangladesh , where it has not been reported for more than 40 years. Northern and western limits of its range are poorly known.