Remarks. Detailed descriptions can be found in Michener, 1965.

In 1965, Michener proposed division of the genus Trichocolletes   into two subgenera, with this species as the sole member of the subgenus Callocolletes   . At that time, the Colletidae   family was regarded as a primitive lineage, but molecular evidence now indicates that it is one of the more derived (Danforth et al., 2006) and that separation of Trichocolletes   from other Australian colletids occurred relatively early (Almeida and Danforth, 2009). However, the premise on which the subgenus was based remains unaltered. If the hind basitibial area of T. pulcherrimus   females is intermediate in nature between those found in the remaining Trichocolletes   species and those of other colletids, it might indicate that T. pulcherrimus   occupies a basal position within the genus.

The use of molecular evidence from fresh material to test this hypothesis was, unfortunately, not possible as attempts to recollect specimens were unsuccessful, but the increased number of species now available made possible reassessment of the morphological evidence. Although the male exhibits a number of striking modifications including the absence of hind tibial spurs, Michener (1965, 2007) chose to give greater weight to the hind basitibial area and details of wing venation.

The basitibial area of females is difficult to observe because of a dense cover of stiff setae. When the setae are removed, the contiguous depressions at the base of each seta form a coarsely areolate surface ( Fig. 22 View Figs 20–23 ). Interpretation of the resulting structure can be difficult. Frequently specimens are found with the setae worn down to the tops of the depressions making the actual surface difficult to detect and producing an apparent rim to the basitibial area. A second difficulty is that even when setae are removed cleanly, the edge of the basitibial area may be coarsely serrated where it intersects the depressions (as shown for T. brachytomus   n.sp. in Fig. 21 View Figs 20–23 ). It is unclear whether or not this state should be classified as carinate.

A better character to use may be the hind basitibial area of males. Comparison of the basitibial areas of males of eight species with those of conspecific females confirmed that the degree of elevation of the basal area from the surrounding surface of the tibia in males reflected that observed for the females after removal of the setae. Of the

The second criterion used by Michener (1965) was the ratio of the lengths of the pterostigma and prestigma. This measurement is difficult to make accurately and involves a degree of subjectivity. It was found ( Table 1, Fig. 28 View Fig ) that the ratio for T. pulcherrimus   lies in the middle of the range for all species. Using 10 specimens each of T. orientalis   n.sp. and T. venustus   , it was estimated that the standard deviation of the measurements was 0.1.

Trichocolletes pulcherrimus   males are unique in having a combination of unusual characters, but with the exception of the loss of the hind tibial spurs, similar characters occur separately or in other combinations in a number of species: projections are found on the fore trochanters of males of T. avialis   n.sp. and T. nitens   n.sp.; modified legs are found in T. aureotinctus   , T. avialis   n.sp., T. burnsi   , T. dives   , T. dowerinensis   , T. hackeri   and T. macrognathus   n.sp.; and modified flagella occur in T. dives   and T. gelasinus   n.sp.. These male characters are not correlated with the female characters discussed above and it is concluded that the evidence presently available does not support recognition of the subgenus Callocolletes   . 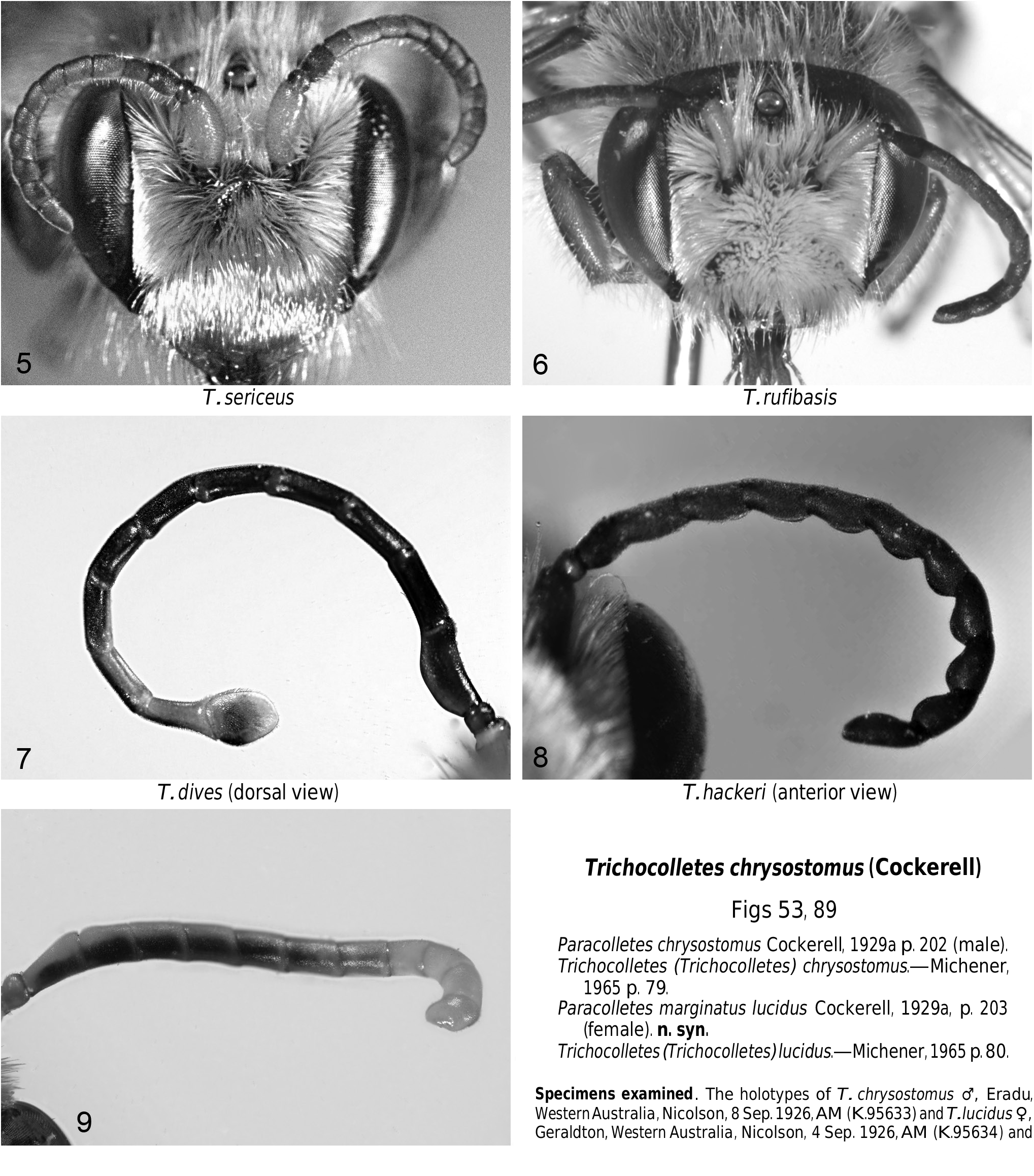 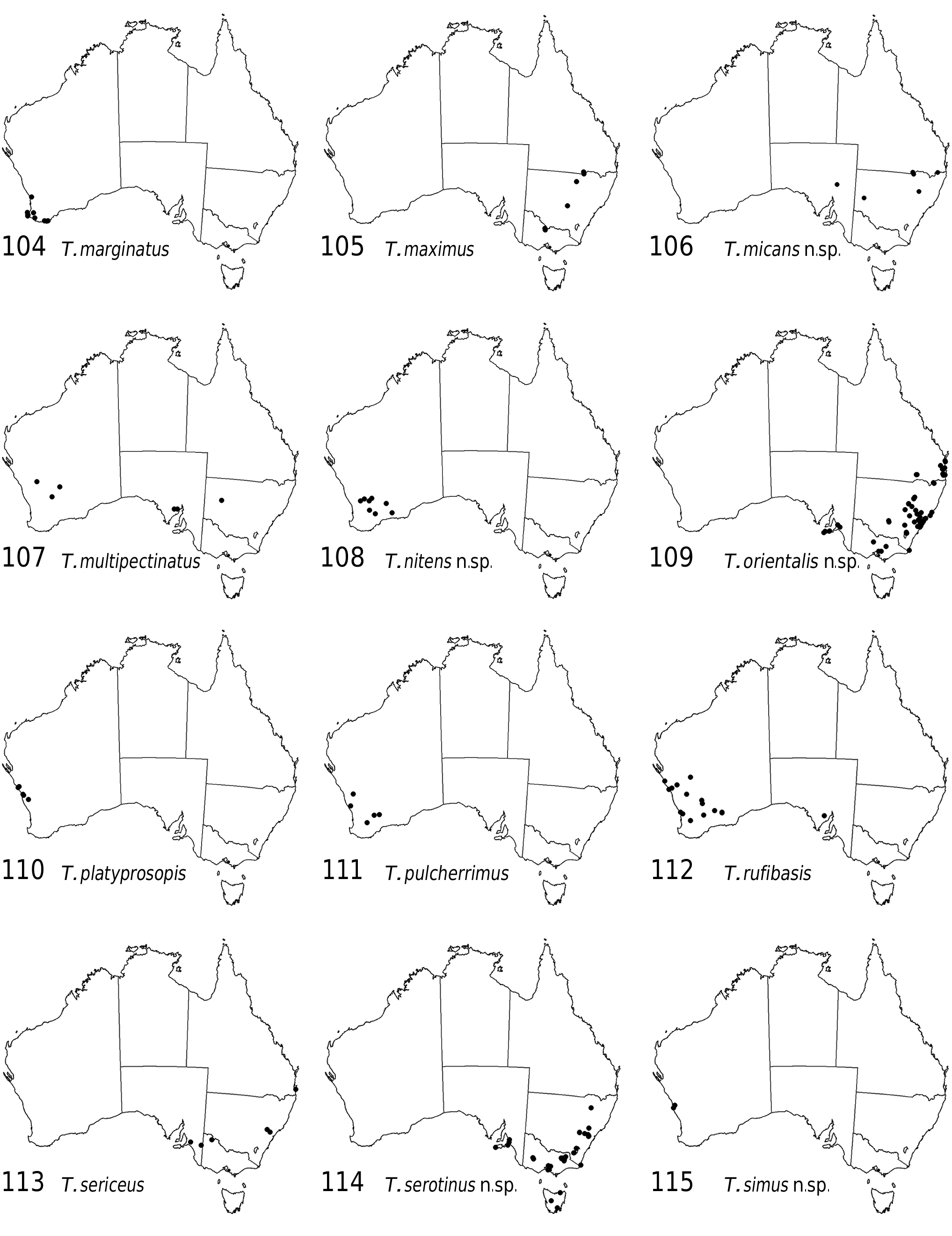 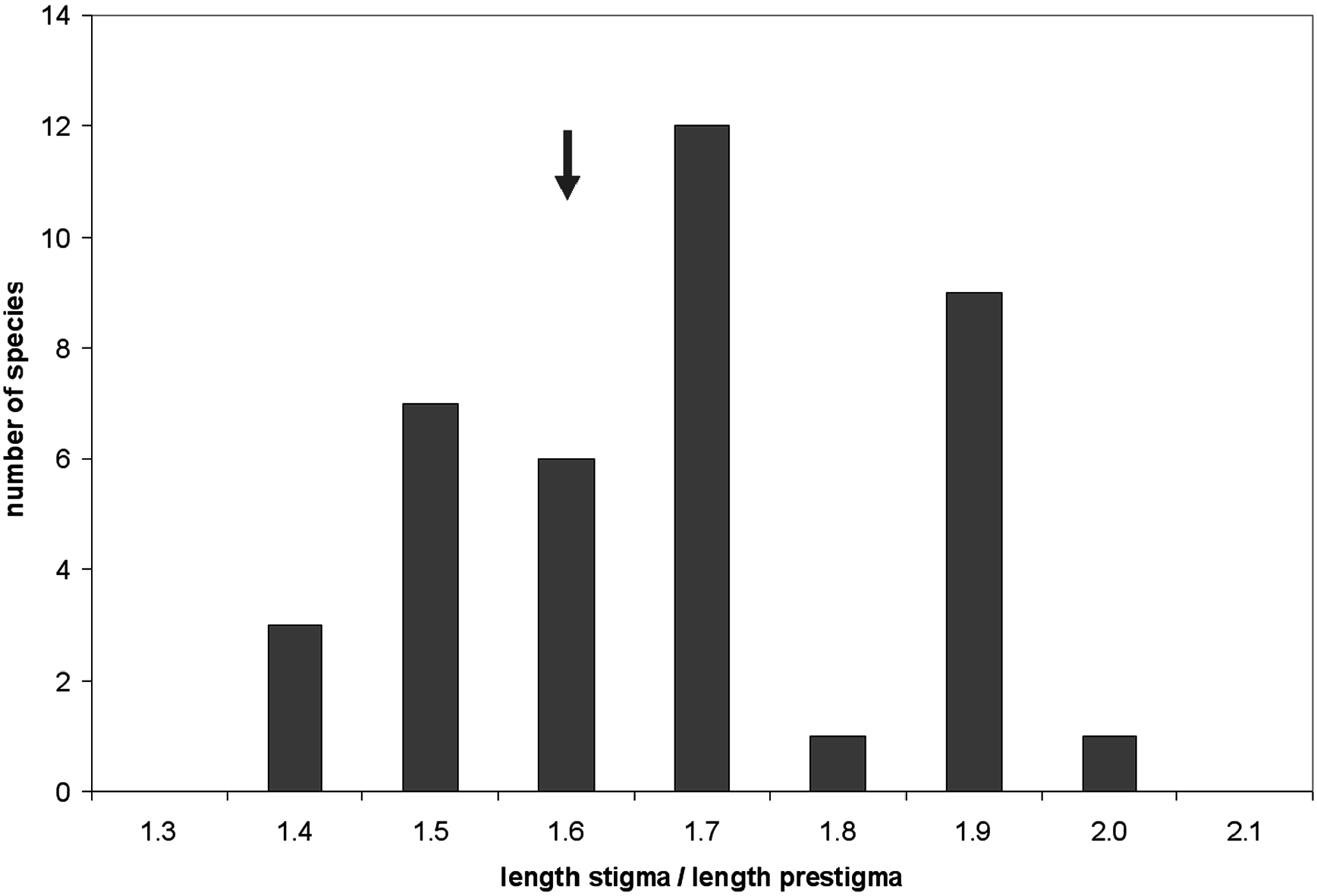 Fig. 28. Number of species versus ratio of length stigma to length prestigma in forewing of Trichocolletes females. The ratio for T. pucherrimus is indicated by the arrow.