Etymology. The species is named after Anna Etingova who participated in the collection of the holotypes.

Diagnosis. The species can be distinguished from other Eulimnogammarus spp   . by a 1-articulate accessory flagellum, sparse setation on rami of uropod III, lack of calceoli, lack of setae on uropods I and II and of plumose setae on uropod III and presence of spines only on the last two body segments.

Description. Description is based on female holotype and two male paratypes. No sexual dimorphism noted other than the presence of brood chamber in females and slightly weaker gnathopods I in female. Body slender, smooth, 8–11 mm, red when alive, with yellow spots on the posterior half of the head segment. Small spines on the last two segments of the urosome, setae on the last segment of pleosome and the first segment of urosome. Eyes kidney-shaped, white with black spots (black in preserved material). Rostrum very short, rounded, antennal sinus shallow ( Fig. 1A View FIGURE 1 ).

Gnathopods I with weak, almond-shaped, weakly setose propodus with 8 pairs of spines on posterior margin ( Fig. 2G View FIGURE 2 ), and with a group of weak setae at the base of the dactylus, somewhat more powerful in males. Gnathopods II with even weaker, heavily setose subrectangular elongated propodus with oblique palmar edge and a group of spines at the palmar-posterior corner ( Fig. 2H View FIGURE 2 ).

Pereopods short, stalky, with short spines and few setae, coxal plates short, rounded, with short setae on the posterior edge. Basipodite of pereopode VII with a large, round lobe extending distally in a rounded protrusion that reaches to the distal end of the next segment ( Fig. 2I View FIGURE 2 ). Posterior edge serrated, with a weak seta under each notch. Uropods I and II with spines. Pleopods of typical gammarid morphology, with 2 small (50 microns) retinacles on the basal article, each equipped with 4-5 bumps on the convex side and 1-2 hooks on the concave side.

Uropod III elongated, nearly bare, peduncle with 2 groups of 3-4 spines, outer ramus 2-2.5 times longer than the peduncle, 2-articulate, with 3 short spine and 1-3 weak simple setae on the outer margin, no spines or setae on the inner margin, 4-5 spines and a few setae at the distal end, spines reaching to ½ of the length of the triangle 2 nd article ( Fig. 2J View FIGURE 2 ). Inner ramus narrow, about 2/3 as long as the outer ramus, narrow and slightly curved, completely bare, except for 1 spine and 2-3 setae at the distal end. Telson cleft to the base with 1-3 short spines at the tip of branches ( Fig. 2K View FIGURE 2 ).

Remarks: this species shares morphological affinities with both Echiuropus   (1-articulate accessory flagellum, sparse to no setation on rami of uropod III) and Eulimnogammarus   (2-articulate outer ramus of uropod III). It is similar to Eulimnogammarus aheneus   and Eulimnogammarus similis   , but it has neither calceoli, nor setae on uropods I and II nor plumose setae on uropod III. Similar to E. hyacynthus   , but is smaller, red rather than blue and has spines only on the last two body segments. Differs from all other Eulimnogammarus spp   . except the next species by having a 1-articulate accessory flagellum and by the structure of uropod III. Molecular phylogeny places this species basally within the paraphyletic genus Eulimnogammarus   , with possible affinities to either the genus Macropereiopus   which clusters within Eulimnogammarus   ( Naumenko et al. 2017; Fig. 5 View FIGURE 5 below), or to the Echiuropus   which is basal to Baikal clade 2 ( Naumenko et al. 2017; Supplementary Fig. 1 View FIGURE 1 ), depending on the nucleotide vs. amino acid sequences of the protein coding genes analyzed. This species is different from the next one by weak gnathopods, inner branch of uropod III longer than 2/3 of the outer branch, no setation on antennae II, uropod III and telson and a more protruding distal lobe on pereopod VII basipodite. 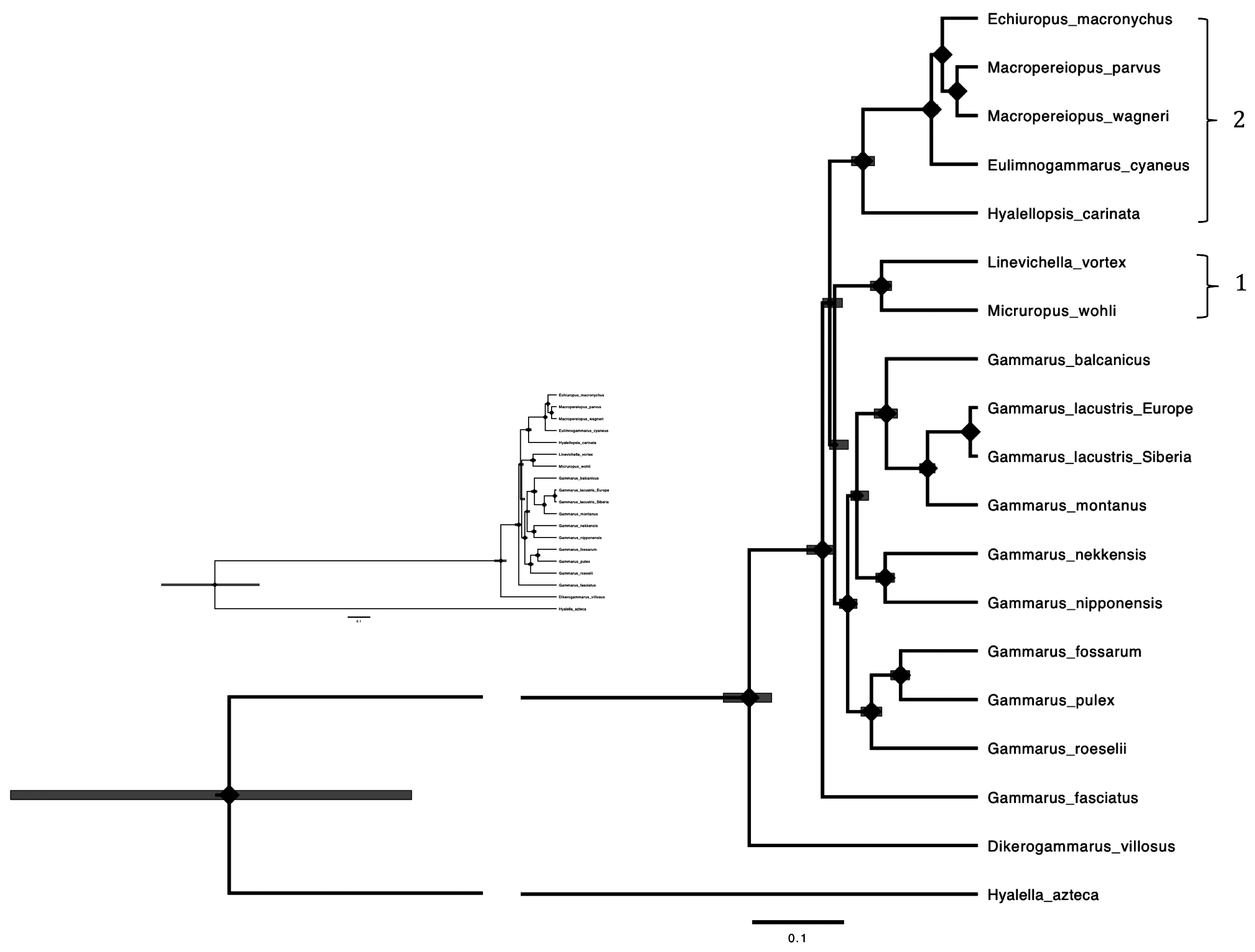 FIGURE 5. Bayesian reconstruction of basal branching events of Baikal endemic radiation based on nucleotide sequences of 16S, 18S and 28S rRNAs, COI and elongation factor 1α. Symbols and bars as on Fig. 4.