Our molecular phylogeny shows that C. labillardieri displays considerable intraspecific genetic diversity with strong support for seven genetic clades ( Figure 1 View FIGURE 1 , 3 View FIGURE 3 ). The genetic distances between many of these clades (Table 4 and 5) are equivalent to species-level differences in other reptiles using mitochondrial genes that evolve at a similar rate (e.g. ND 4, Scott & Keogh 2000), but importantly, our morphological data show high levels of geographic variation that do not correspond well to the genetic patterns. Therefore, we maintain that C. labillardieri should be considered a single but morphologically variable species.

Clades 1, 3 and 7 are restricted to the High Rainfall Zone (HRZ) of southwestern Australia. The biogeographic break between Clades 1 and 3 coincides with boundaries recognised in multiple taxonomic groups, including plants ( Lambertia orbifolia [ Byrne et al. 1999]), frogs ( Geocrinia rosea species complex [ Wardell-Johnson & Roberts 1993]; Geocrinia leai [ Edwards 2007 b]; Metacrinia nichollsi [ Edwards et al. 2008]) and freshwater invertebrates ( Engaewa subcoerulea and E. similis [ Horwitz & Adams 2000]; Cherax preissii [ Gouws et al. 2006]). Contraction to moist refugia during arid pulses of the Pliocene/Pleistocene ( Dodson & Macphail 2004) is thought to have promoted much of this divergence. This seems like a plausible explanation for the patterns seen in our study given the obvious ecological preference of C. labillardieri , where dependence on wet restricted sites such as granite outcrops is likely to have resulted in limited gene flow between populations during arid periods. Indeed, a previous study of C. labillardieri suggested that the isolation of populations to granite outcrops accounted for observed morphological differences throughout SWA ( Ford 1969). However, habitat differentiation may also be important for diversification in this taxon. For example, the distribution of Clade 1 appears to largely coincide with the Warren biogeographic subregion, defined under the Interim Biogeographical Regionalisation of Australia ( IBRA), further supporting its recognition as a distinct bioregion ( Thackway & Cresswell 1995). In addition, the eastern extent of the distribution of Clade 1 coincides with the Transitional Rainfall Zone (TRZ) / HRZ climatic boundary, recognized as a significant climatic barrier for plants ( Hopper 1979; Hopper & Gioia 2004) and frogs (Edwards et al. 2007, 2008). However, the close relationship between Clade 2 in the TRZ and Clades 1 and 3 in the HRZ suggests a more recent genetic connection with subsequent geographic isolation across the TRZ / HRZ boundary. Both Clades 4 and 5 appear to be geographic isolates within the TRZ. This is consistent with climatic data suggesting long-term geographic isolation as the primary driver for the huge diversity of endemic species and populations found in the Stirling Ranges (Clade 5) ( Erika et al. 1993; Main 1996; Hopper & Gioia 2004; Edwards et al. 2008; Rix & Harvey 2012). Similarly, Clade 4 may have experienced a prolonged period of geographic isolation based on strong support by the nuclear data. This is consistent with patterns in plants ( Byrne & Hines 2004) and frogs ( Edwards et al. 2007 a) which implicate a xeric barrier east of the Bremer Bay region as the primary cause for this isolation. The distributions of clades 2 and 4 also fall within different IBRA subregions of the Esperance Plains; the Fitzgerald (Clade 2) and Recherche (Clade 4). Both regions comprise subdued coastal sandplains on the coast, but differ in environmental aspects such as rainfall and geological substrate ( Environment Australia 2004). 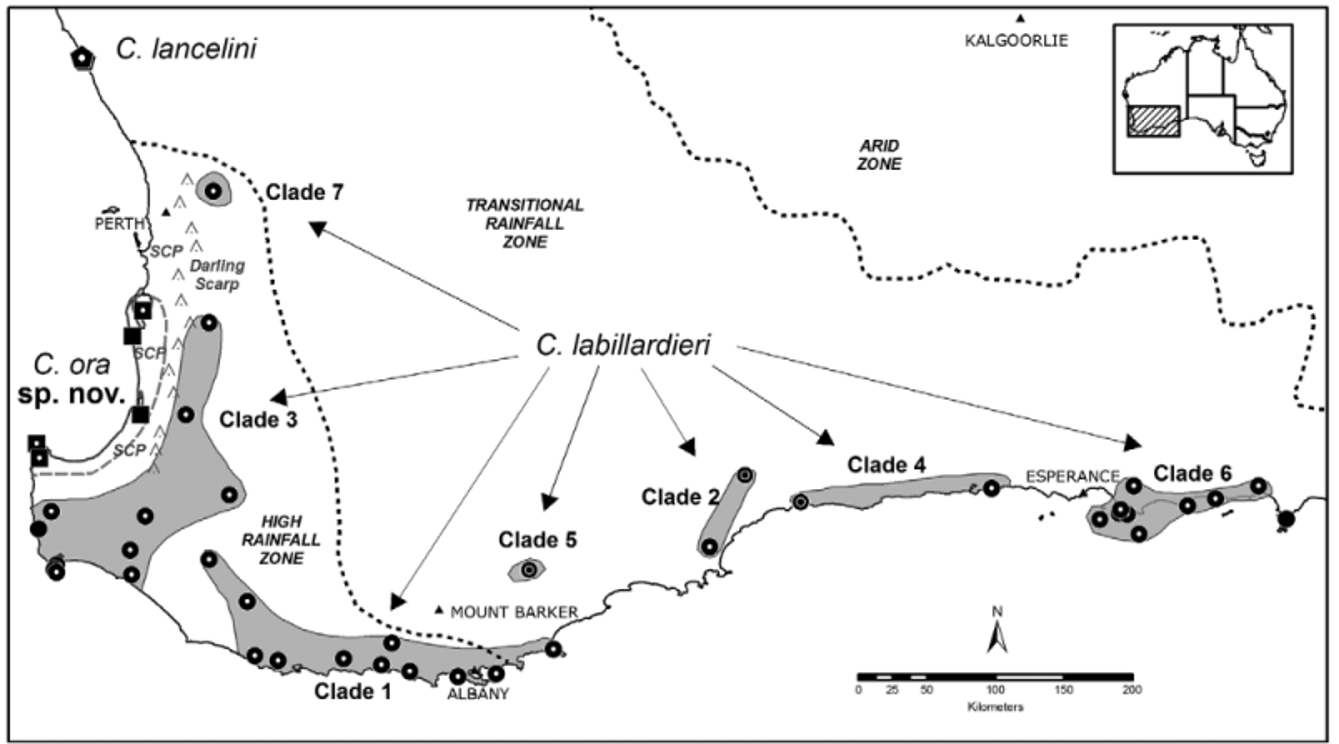 FIGURE 1. Distribution of the seven major C. labillardieri (circle) clades, the C. lancelini (pentagonal) clade and the new taxon, C. ora sp. nov (square). Specimens used in both the genetic and morphological analyses are denoted with a white center, and specimens for which we only had morphological data are solid. The few specimens of C. labillardieri for which we only had tissue samples are denoted with an inner white ring. SCP refers to the Swan Coastal Plain west of the Darling Scarp. Black dotted lines represent boundaries between rainfall zones, as defined by Hopper (1979). Grey dotted line demarks the known range for C. ora sp. nov. 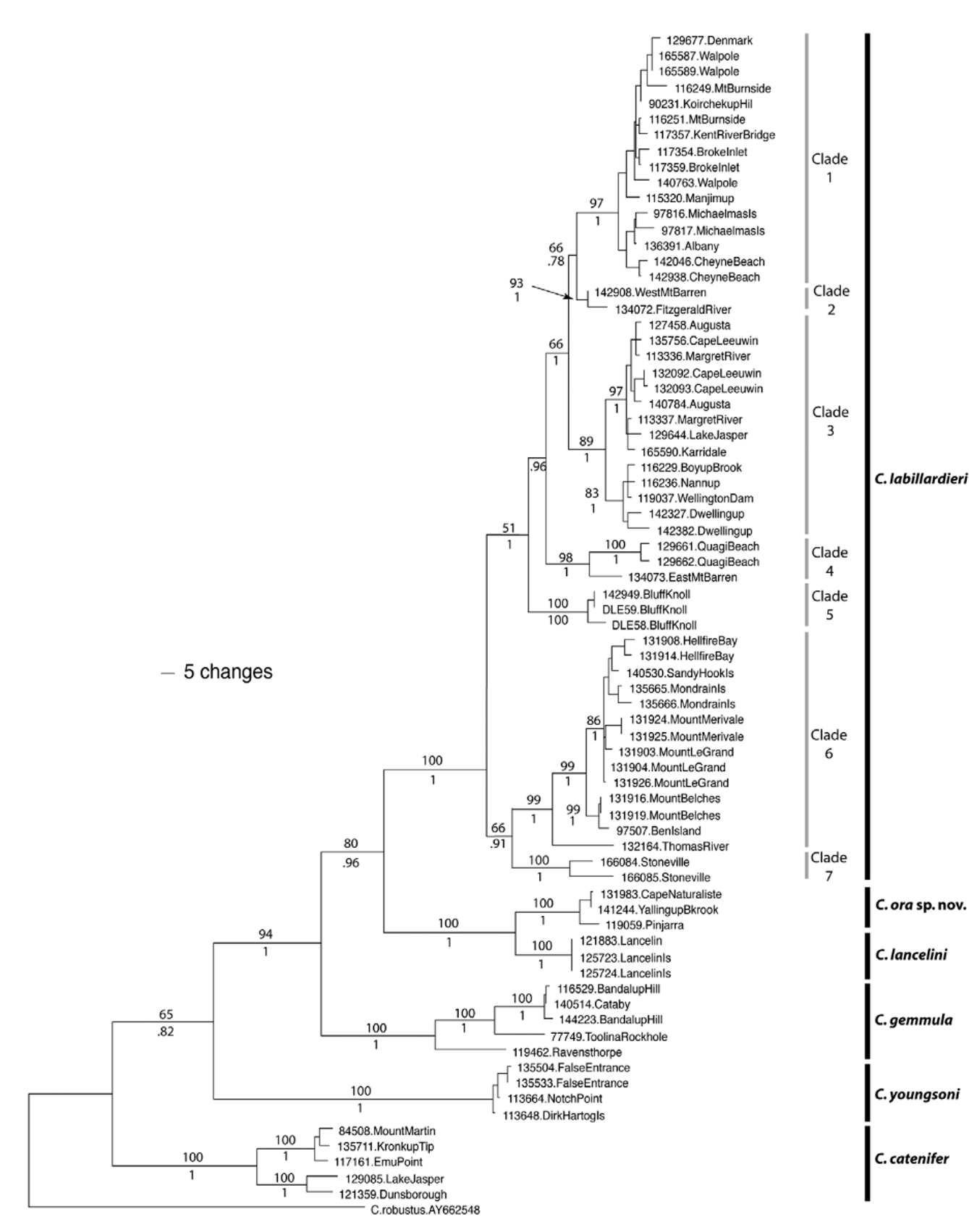 FIGURE 3. Phylogram based on analysis of the combined data set. Values on selected branches refer to parsimony bootstrap values above the branch and Bayesian posterior probabilities below.