Diagnosis. Belonging to a group of four species of Pteroptyx   s. str. in which T8 has elongate lobes beside the median posterior emargination; most obviously distinguished from asymmetria   and tener   by the shape of the terminal abdominal tergites (in asymmetria   T7 is not medially emarginated, and T8 is asymmetrical; in tener   T7 is shallowly emarginated and slightly sinuous with posterolateral corners narrowed, and T8 is symmetrical); similar to P. decolor   which is not well characterised in collections, differing in the dorsal colour pattern ( P. decolor   is entirely pale coloured dorsally).

Discussion. Ballantyne (2001) distinguished P. similis   from both P. decolor   and P. tener   , but not from P. bearni   which had not been adequately characterised in Ballantyne and McLean (1970). Tergite 8 was not dissected and Ballantyne and McLean’s Figure 6d View FIGURE 6 shows T7 outline consistent with that of bearni   as described here, but T8 is depicted without lobes to either side of the median emargination. Ballantyne (2001; Fig. 18 View FIGURES 18–25 ) depicted a male from Paya Paloh apparently lacking these lobes on T8 and its identity has not been confirmed.

Ohba and Wong (2012) indicated incorrectly that the morphological features of this and P. tener   were very similar except for the orange colour in the pronotum.

In the field the distinctive pinkish –orange pronotum and darker elytra enable quick and usually accurate identification of P. bearni   (Wong pers com.), especially if light patterns are observed (e.g. Fig. 197 View FIGURES 191–199 ). Ballantyne (in prep.) observed difficulties interpreting pronotal colour in ethanol preserved specimens, where the pink colour may have leached out. Its occurrence may be variable, since pinned specimens from the same locality also vary in pronotal colour. The pink colour in the fat body is usually found elsewhere apart from the pronotum, and can be seen especially in the dorsal abdomen, where the cuticle is paler and semitransparent (e.g. Fig. 197 View FIGURES 191–199 ). Specimens of P asymmetria   from Perak and Selangor (FRIM) also have pinkish colour in the pronotum (Ballantyne obs.).

In one Kalabakan River specimen the posterior margin of V7 is arched dorsally such that MPP not visible and projections of T8 are visible from beneath ( Figs 198, 199 View FIGURES 191–199 ).

P. bearni   is non-synchronous, and is usually found downstream from the synchronously flashing P. tener   in the more saline waters, but occasionally, probably due to tidal inflows, their habitats may overlap ( Ohba and Wong 2012). 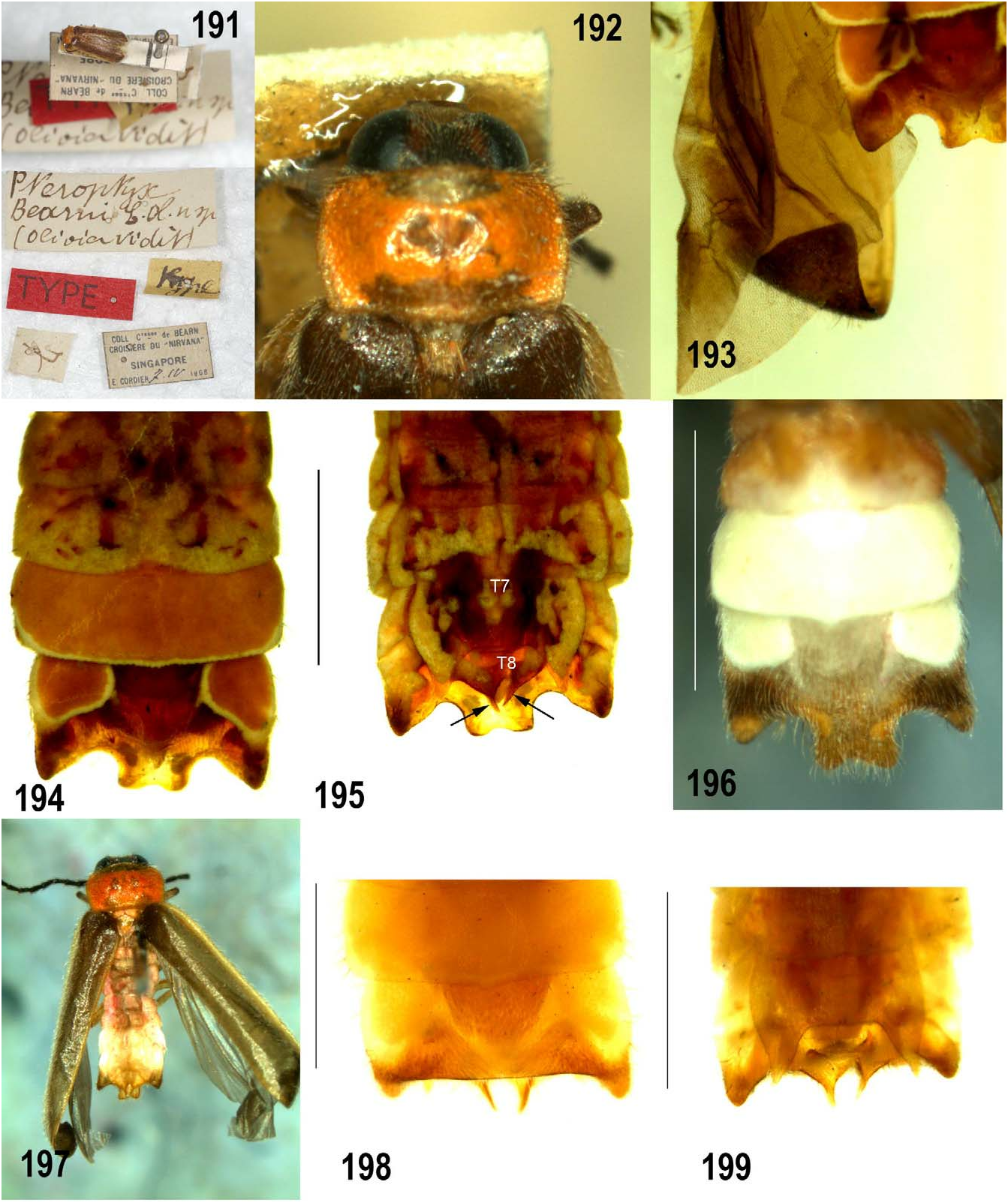