Type. Not reliably located. LB located a specimen in the Bourgeois collection (Box 22 MNHN) in 2003 labelled 1. (hand written) Bourgeoisia antipodum Bourg   ; 2. Kanala Fauvel. The specimen lacks head and pronotum, and is discussed below.

Diagnosis. Specimens identified as L. antipodum Bourgeois   conform in size, extent of eye emargination, and extent of LOs in V6, 7 to the Kanala males in the Olivier collection, and extent of LOs to the fragment of abdomen in the Bourgeois collection (MNHN) with the exception of those indicated by * above which are discussed below. A small species known only from New Caledonia, with deep grey dorsal colouration ( Fig. 109 View FIGURES 109–119 ), large head with eyes subcontiguous ventrally, and a well developed dorso-lateral eye emargination ( Fig. 110 View FIGURES 109–119 ); LOs in V6, 7 oval in outline and not reaching margins of either segment, nor to the posterior margin in V7 ( Fig. 114 View FIGURES 109–119 ). Females and larvae not associated.

Remarks. We consider the specimens in the Olivier collection (MNHN) most closely approach the original designation of this species by Bourgeois. The specimen Ballantyne located in the Bourgeois collection (MNHN) is labelled Bourgeoisia   . Whether it can be regarded as a type is questionable. Olivier (1908) assigned the species to Bourgeoisia   ; it may have been relabelled by Bourgeois or possibly Olivier himself. It is without a head and pronotum and both elytra are incomplete. However the abdomen shows features consistent with the Kanala males in the Olivier collection viz. oval LOs in V6, 7 not reaching either the sides, or the posterior margin of V7. The Kanala males (MNHN) also have well defined eye emarginations visible when the head is withdrawn.

This species may be very poorly represented now in New Caledonia, as despite extensive collecting there by the team from Queensland Museum only a single Farino male has the strong eye excavation and appears to have a very reduced LO in both V6 and 7.

Alternatively (see below) the retraction of the light organ in the older pinned specimens may be simply a postmortem effect. Determination of critical features in some specimens which are in poor condition has been difficult. Ballantyne and Lambkin (2009 Fig. 59 View FIGURES 56–65 ) figured the specimen from Ninrin-reu (SAMA) with well defined eye emarginations. A large and widespread population of a second species with extensive LOs in V6, 7 was a recent collection, but this population, described here as Luciola aquilaclara   sp. nov., lacks the eye emargination. A second extensive population without LOs and with very strong dorsal eye emarginations is described as L. oculofissa   sp. nov. All three New Caledonian species share a similar dorsal colouration and almost identical pattern of aedeagus and aedeagal sheath. The possible function of the eye emargination is discussed subsequently. No larval associations for this species were made.

Ballantyne (1968) redescribed a single male from the Solomons with a well defined eye emargination, but could not determine the extent of the LO material in V6, 7, and it may belong here. The LL of the male aedeagus are closely approximate dorsally ( Ballantyne 1968 Figs 174, 175 View FIGURES 168–176 ) unlike the specimens depicted here. A second specimen from San Cristobal included here has eye emarginations but LO in V6 may be bipartite (they are separated by fat body and thus extent of the actual light organ is difficult to determine). Ballantyne and Lambkin (2009:46, Figs 142, 143 View FIGURES 139–146 ) described Atyphella kirakira   from San Cristobal with bipartite LO in V6 separated by extensive fat body, and non aggregated fat body in V7.

Existing information about the New Caledonian firefly fauna is confusing. L. antipodum   may have been represented in the recent QMBA field collections by a single male. L. caledonica Bourgeois   was described, probably from a female, as 10 mm long, with an orange pronotum having a dark anterior mark and dark brown elytra. No specimens approaching this size have been collected recently on New Caledonia and Ballantyne and Lambkin (2009) synonymised caledonica   with plagiata Blanchard   and assigned the species to Pygatyphella   . Fauvel’s (1904) account of luminous L. caledonica   from New Caledonia is at best second hand and the observations he refers to may well have been luminous fungi. Heller’s (1916) list is a catalogue entry only. 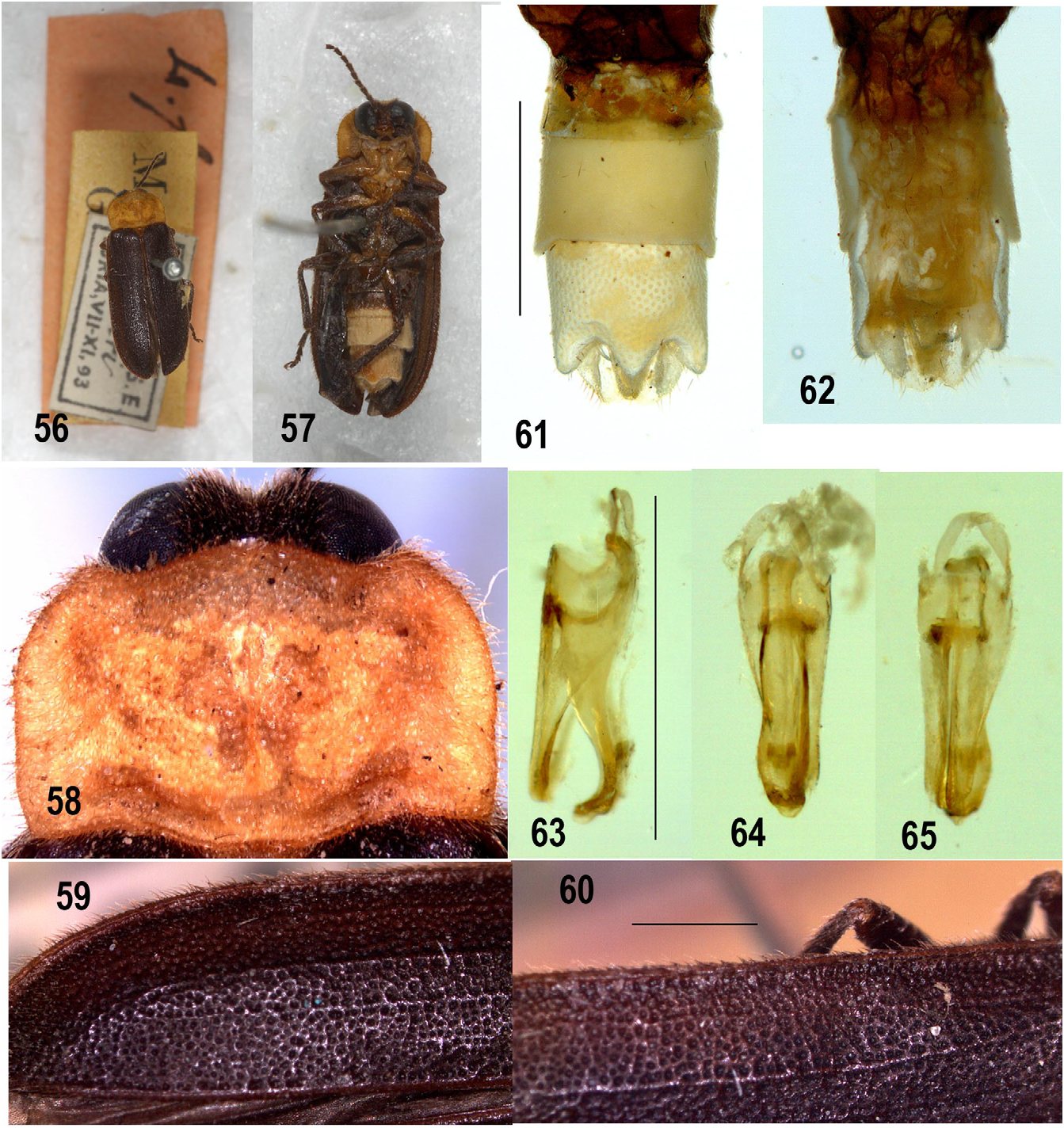 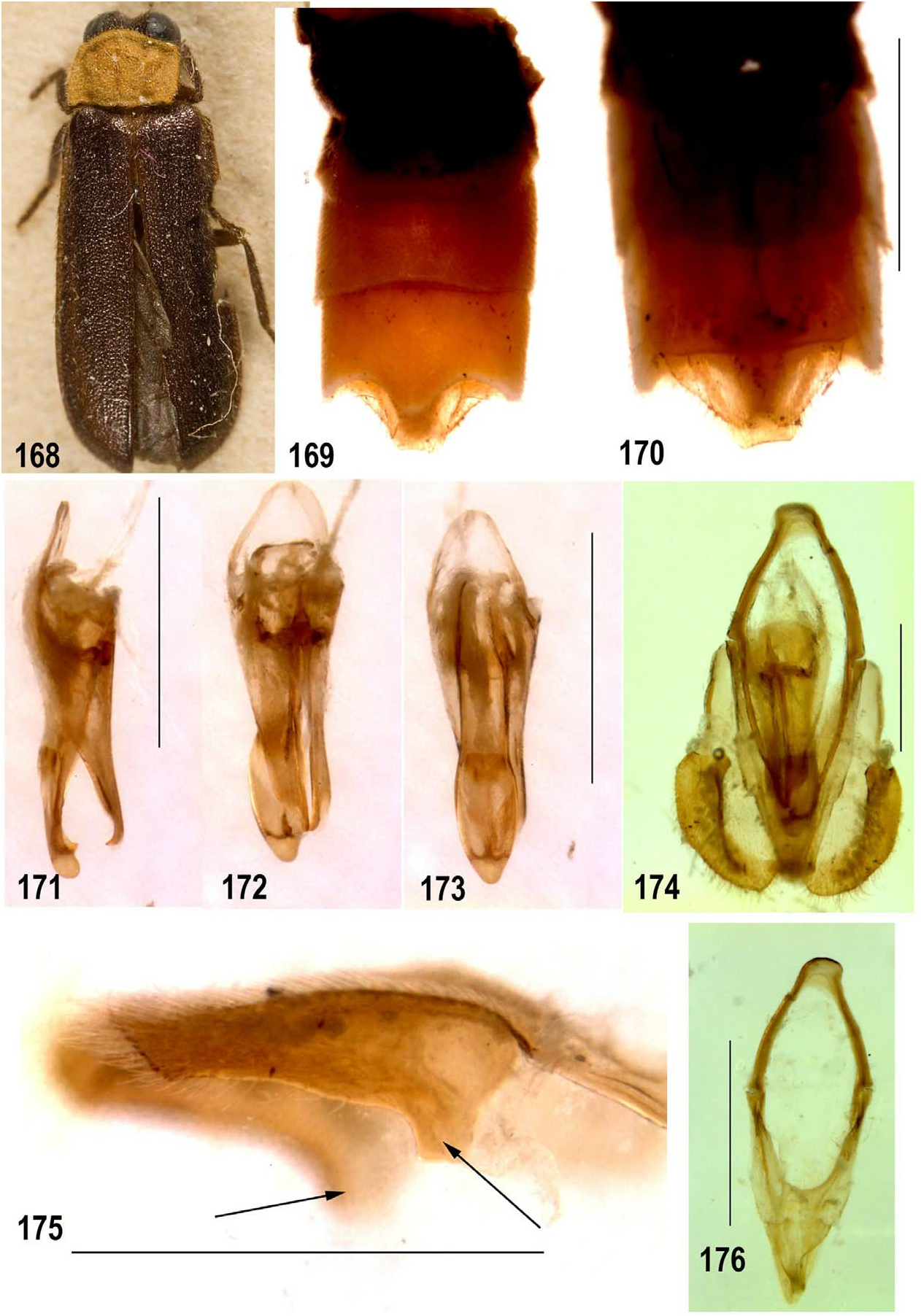 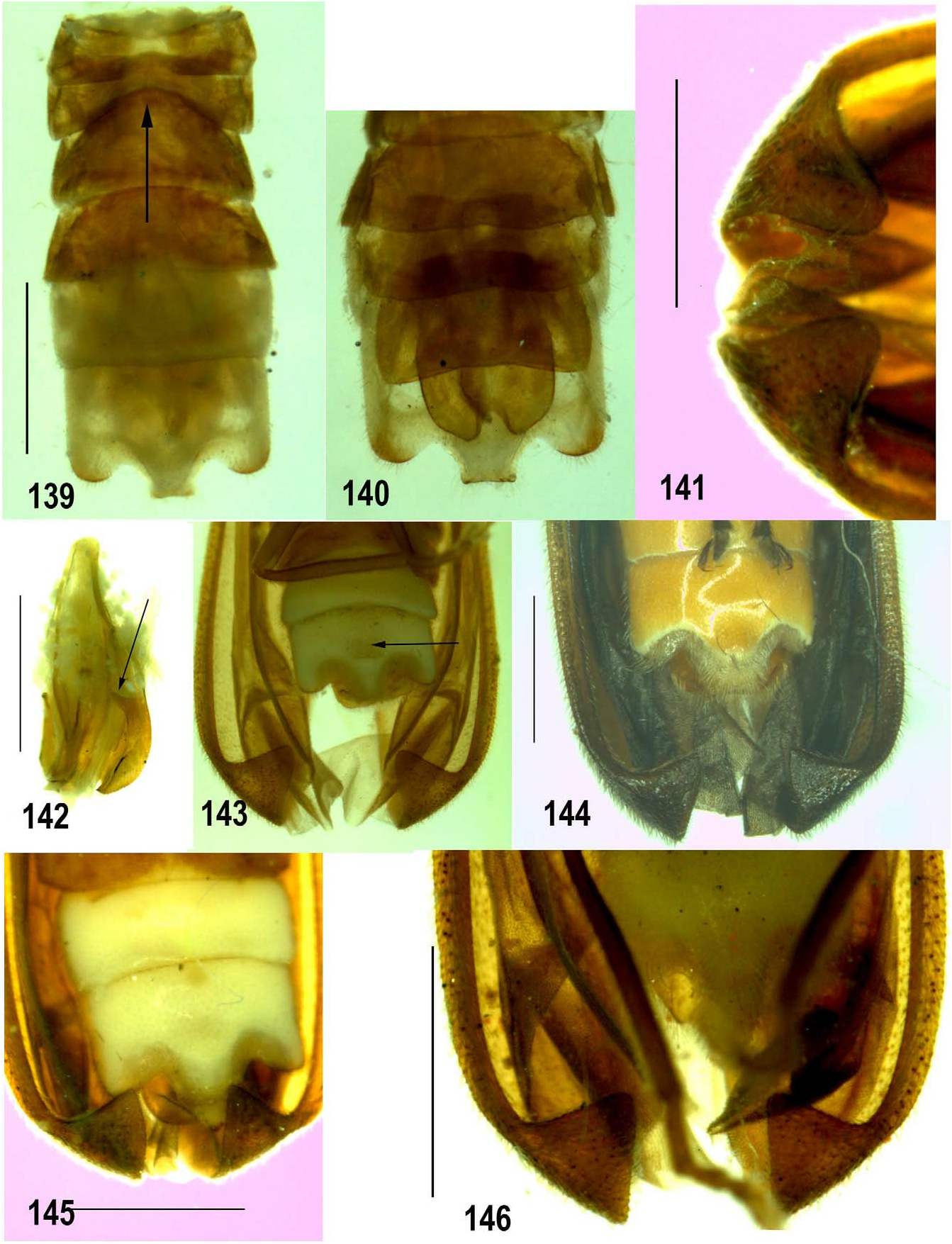