Head: trilobed (supra-antennal lobes and clypeus). Clypeus rounded and pilose at the tip. Ocelli located closer to their nearest compound eye than to each other and lie above the centro-ocular line. Metopidium angled slightly forward from the face, blending into anterior process.

Colour: Ocelli pale yellow with darker centres. Compound eyes yellow with darker striations. Pronotum predominantly dark brown to black, with a large ‘saddle’ region of yellow-green between the anterior and posterior processes, and small intermittent specks of green on the anterior process. Yellow-green streaks, with acute apices, immediately adjacent to the distal edge of compound eyes. Posterior process with small white patch at tip. Metopidium largely yellow-green with small dark patches. Legs, abdomen, and underside of thorax all yellow-green in colour. Forewings dark brown, except for translucent segments in entirety of the 2 nd apical cell and a smaller region on 3 rd apical cell, as well as two on apical limbus, at posterior and dorsal most points.

Natural history and behaviour: Knowledge of the natural history and behaviour of C. rex   is clearly limited because only a single specimen has been found thus far. However, some preliminary observations were made. The holotype was found stationary on the underside of a leaf near the top of a Piper   sp. plant approximately three metres tall. The plant itself was situated on the bank of a small river, about one metre from the water’s edge. It was not clear as to whether the C. rex   individual was feeding on Piper   sp., and therefore it cannot be confirmed as a true host plant; however, due to the amount of time the individual remained stationary, some association likely exists. There were no other C. rex   individuals found nearby, indicating that, like other Cladonota   species ( Lin 2006; Godoy et al. 2006), C. rex   is solitary in adulthood. Planthopper nymphs (infraorder Fulgoromorpha) were located on the same leaf as the C. rex   individual but no obvious species interaction was evident. A single ant ( Tapinoma   sp.) was observed approaching the C. rex   individual and probing and tapping the treehopper’s face, near the antennae. This seemingly prompted the treehopper to lift the posterior process of the pronotum away from the abdomen and buzz its wings ( Fig. 4 View FIGURES 1–4 ). The ant immediately fled. Together these observa- tions indicate that C. rex   , and likely other Cladonota   species, use wing-buzzes as a deterrent to attention from ants and possibly other unwanted mutualists or predators.

Distribution: Known only from the type locality in Costa Rica.

Etymology: the species name rex   is given in honour of the immense contributions of Reginald “Rex” B. Cocroft to humankind’s understanding of treehopper behaviour and ecology. It is utilised as a noun in apposition. Discussion: The setae associated with pronotal pits appear to be sensory in function, as has been previously suggested in other treehopper genera ( Wood & Morris 1974; Wood 1975; Dietrich 1989; Stegmann 1998). 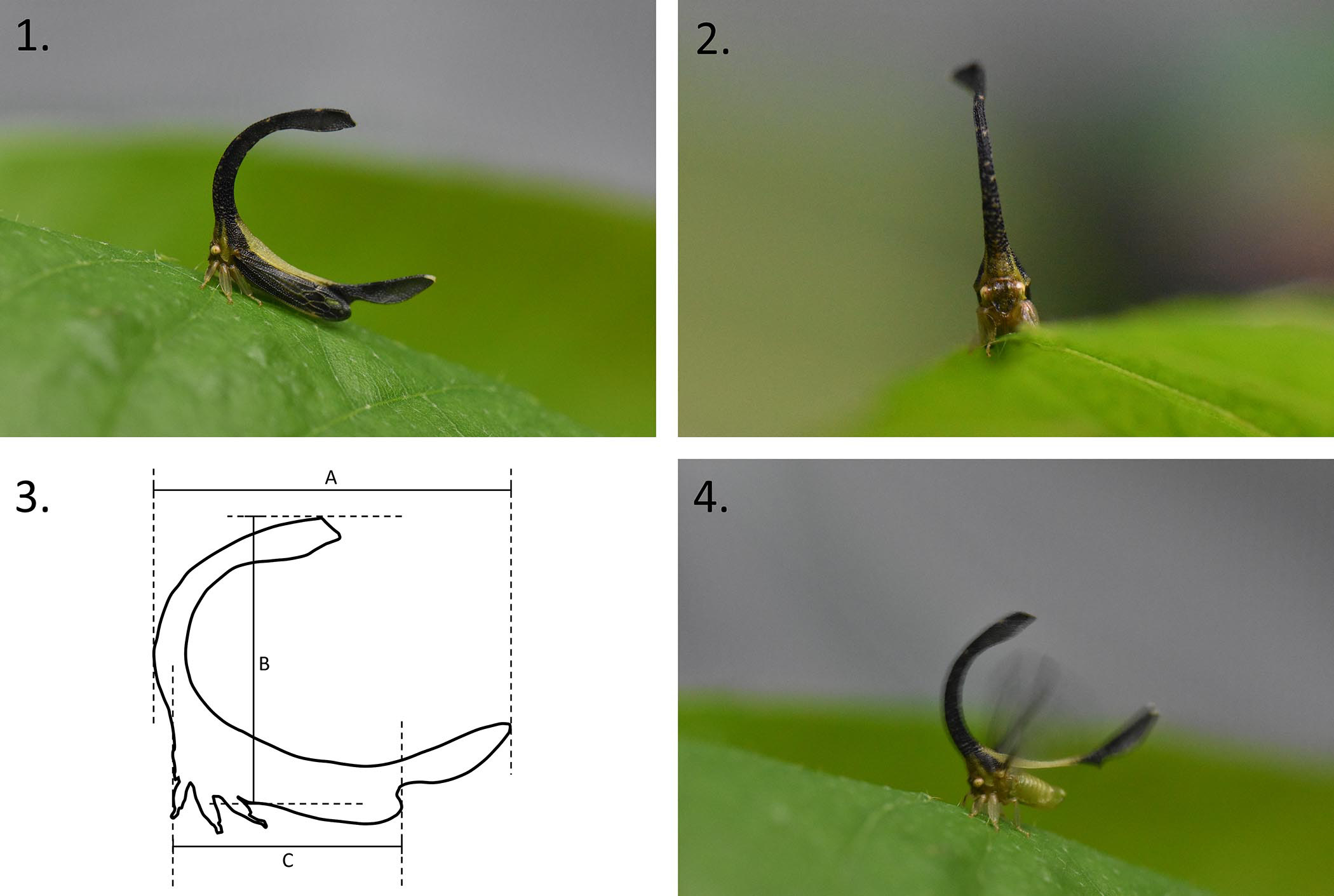