ETYMOLOGY. — In honour to Prof. Charles Depéret who studied the geology of the area and the whole fauna from this locality.

DIAGNOSIS. — Large sized porcupine with semi hypsodont cheek teeth. The third molars reduced and almost triangular in occlusal outline. Sinus and sinusids are shallow on upper and lower molars but deep on p4.

From the upper jaw, only isolated teeth are preserved. The size of the upper cheek teeth decreases from P4 to M3. Their occlusal pattern is pentalophodont and indented by the lingual hypoflexus and four labial synclines that are initially closed (the parafossette and postfossette) or closed by attrition to quickly form enamel islands (the anterior and posterior mesoflexa). The number and form of these enamel islands is a function of the degree of wear. Upper cheek teeth have one large lingual root and two small labial roots. The lingual root is not grooved.

The mandible is known with three specimens kept in the Perpignan collection (PR-24, 25 and

147) ( Fig. 3B View FIG ). The corpus mandibulae is thick and shallow. The masseter crest is prominent but wide; it is not sharply crested as in H. primigenia   . The diastema is long and smoothly curved. The lower incisor follows the ventral margin of the corpus mandibulae and rises up in the ascending ramus. The ventral margin of the corpus mandibulae is arc shaped below the diastema and cheek teeth, but it forms a notch below m2 where the anterior end of the angular process is located. The ascending ramus and angular process are broken in all samples. The tooth row is obliquely situated to the longitudinal axis of the mandible, and lingually inclined.

The lower incisor has a rather triangular section. Its anterior face is smooth. The enamel covers one third of the labial side while along the lingual side it is a little less wide. The root of the lower incisor cannot be observed because all specimens are missing the ascending ramus.

The lower cheek teeth, fixed on mandibles or isolated, represent several age-classes in this sample. In young individuals, the occlusal outline of cheek teeth is rather square, while in adult and old individuals their outline gets rounded. In all lower cheek teeth, the hypoflexid deeply penetrates the occlusal surface and joins the posterofossette. The latter is divided into two parts by a short crochet issued from the entoconid. The anterofossette and posterofossette are lingually closed because of the strong enamel bars, even before the eruption of teeth. The anterior and posterior mesoflexids are open when the tooth is fresh or slightly worn, and then they get closed in old individuals. The posterior mesoflexid remains open lingually later than the anterior one.

The d4 is anteriorly elongated, and its anterior tip is rather sharp. The p4 is much higher crowned than the molars. The m3 is typical with its reduced posterior portion and almost triangular occlusal outline.

The d4 has three roots: one large anterior and two posterior ones. On the p4 the number of roots is variable since on four specimens there are three roots as on the d4, while on one p4 (PR- 152) the anterior root is almost divided into two parts and has two distinct cavities. m1 and m2 have four distinct roots. On the m3, there are two anterior and one posterior roots, except in one specimen (Pp-58c) which has the posterior root divided into two cavities.

The genus Hystrix   is known in Europe by five fossil species ( H. parvae   [ Kretzoi, 1951], H. primigenia   , H. refossa   , H. etrusca Bosco, 1898   and H. vinogradovi Argyropulo, 1941   ) and one extant species H. cristata   ( Weers 1994; Sen 1996, 1999). Among them, H. refossa   , H. etrusca   , H. vinogradovi   and H. cristata   are late Pliocene-Holocene species characterized by their hypsodont cheek teeth. This feature and also some other characters of the dentition, mandible and skull differentiate them from the earlier representatives of this genus ( Sen 1999). Moreover, H. vinogradovi   differs from the others in its considerably smaller dimensions (e.g., length p4-m3 between 28-31 mm). H. refossa   and H. etrusca   are morphologically very close to H. cristata   , while H. vinogradovi   is thought to be related to the south Asian living species H. (Acanthion) brachyura Linnaeus, 1758   ( Weers 1994). These four species cannot be compared usefully to the specimens from Perpignan.

The new species is much similar to H. primigenia   to which it was initially attributed by Depéret (1890). The type locality of H. primigenia   is Pikermi in Greece, dated as late MN 11 or MN 12. From this locality, there are one upper and two lower jaws with complete toothrows in the collections of the Muséum national d’Histoire naturelle in Paris ( Figs 2C View FIG ; 4D View FIG ) ( Gaudry 1862). In addition to this, a rich material, including five upper and eight lower jaws with complete toothrows referred to H. primigenia   , was recently collected from Hadji Dimovo in Bulgaria; this locality is dated as MN 12, and the material is under study. Its interest is that it provides information about the size and morphological variation in this species that the Pikermi material cannot. The Perpignan sample was directly compared with that of both Pikermi and Hadji Dimovo. It appears that the new species shares several characters with H. primigenia   : shallow corpus mandibulae, smooth diastema curve in front of p4, strong masseter crest, similar occlusal pattern of cheek teeth, deep hypoflexid on p4, shallow mesoflexus (id) on upper (lower) cheek teeth. These characters can be considered as plesiomorphic since most of them are also shared with H. parvae   . The occlusal pattern of cheek teeth is conservative in all Hystrix species   , as already mentioned by several authors; thus, it is considered useless for species determination ( Masini & Rook 1993; Sen 1994, 1999; Weers 1994; Weers & Montoya 1996). The characteristic features are the size, the degree of hypsodonty of cheek teeth, the depth of the hypoflexus (id) on molars and the reduction (or not) of third molars. H. primigenia   is on average smaller than H. depereti   n. sp ( Fig. 5 View FIG ). To illustrate this, the length of the p4-m3 alveoli is characteristic enough since it measures 40.5 and 41.7 mm in two mandibles from Pikermi, between 42.5 to 46.8 mm in eight specimens from Hadji Dimovo (average 44.7 mm) and 49.5 to 50.5 mm in two mandibles from Serrat d’en Vacquer.

In H. primigenia   , as in H. parvae   , the crown height of cheek teeth is less than in H. depereti   n. sp.: on a fresh p4 from Serrat d’en Vacquer, the ratio of the maximum enamel height/the maximum occlusal length is 1.11 vs 0.86 to 0.92 on four relatively fresh p4 from Hadji Dimovo. In lateral view, the hypoflexus (id) of upper (lower) molars are deeper in H. primigenia   (as deep as the half of the crown height), and the third molars are much less reduced posteriorly and generally square shaped. All these differences allow the recognition of a new species in the material from Serrat d’en Vacquer. 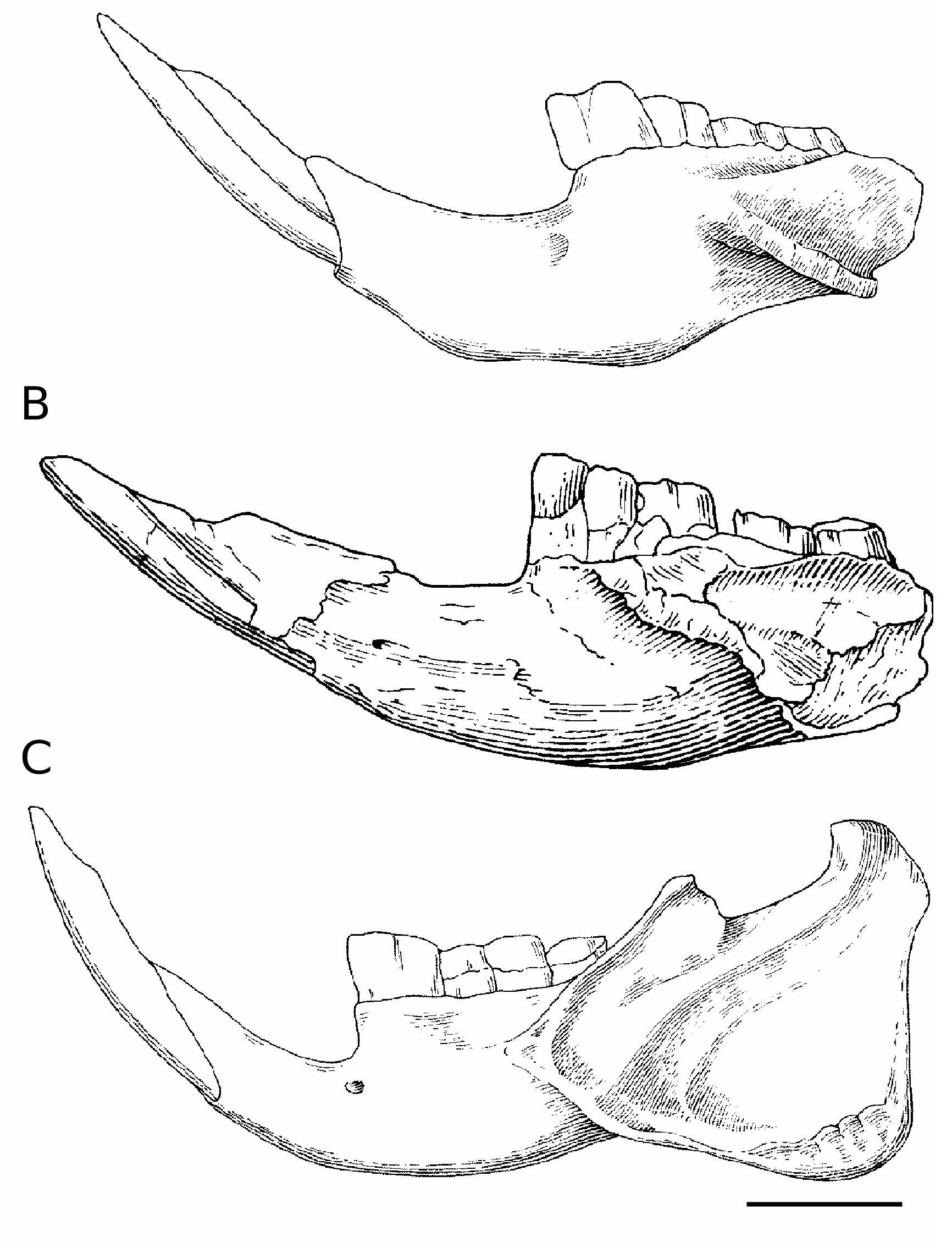 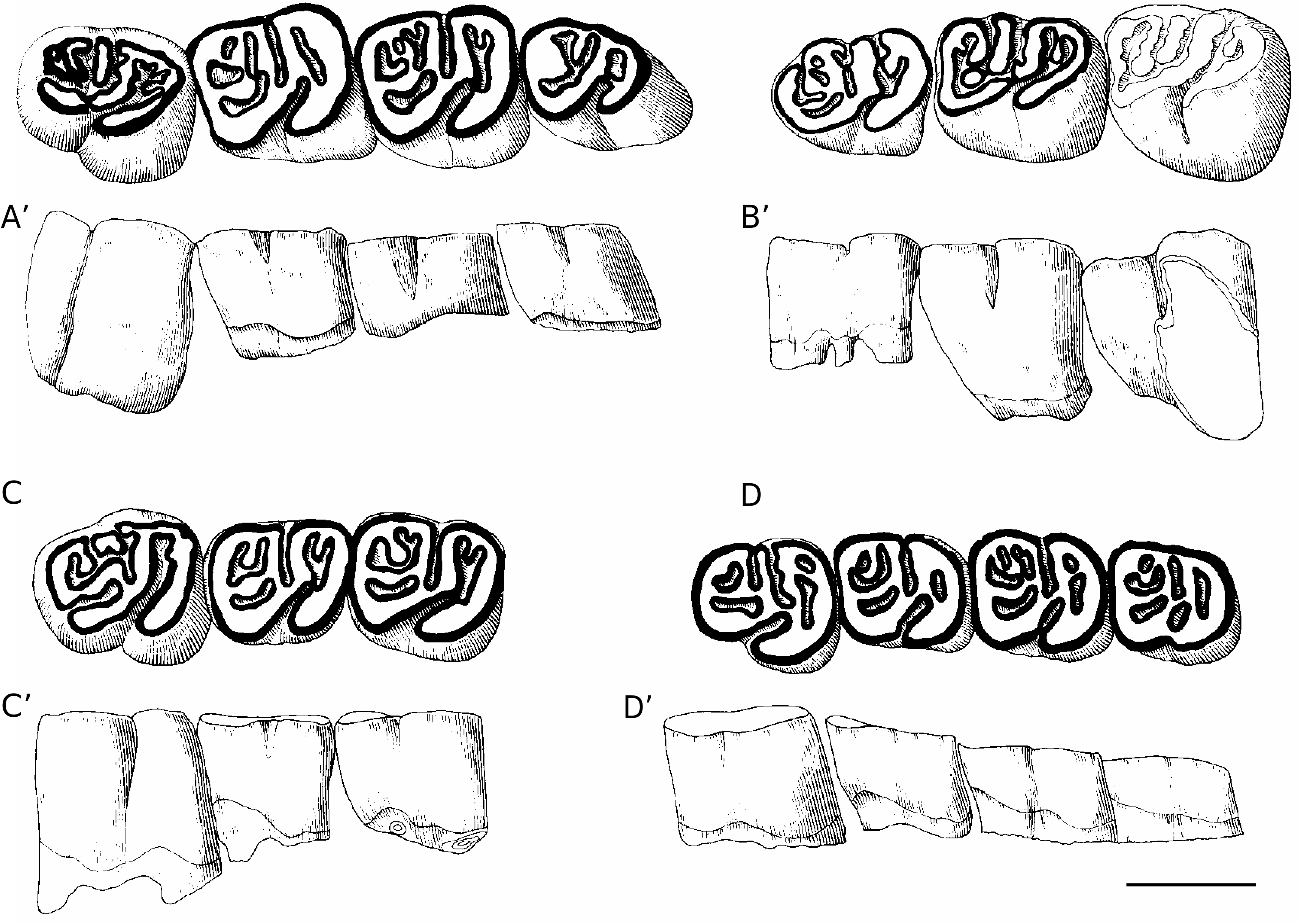 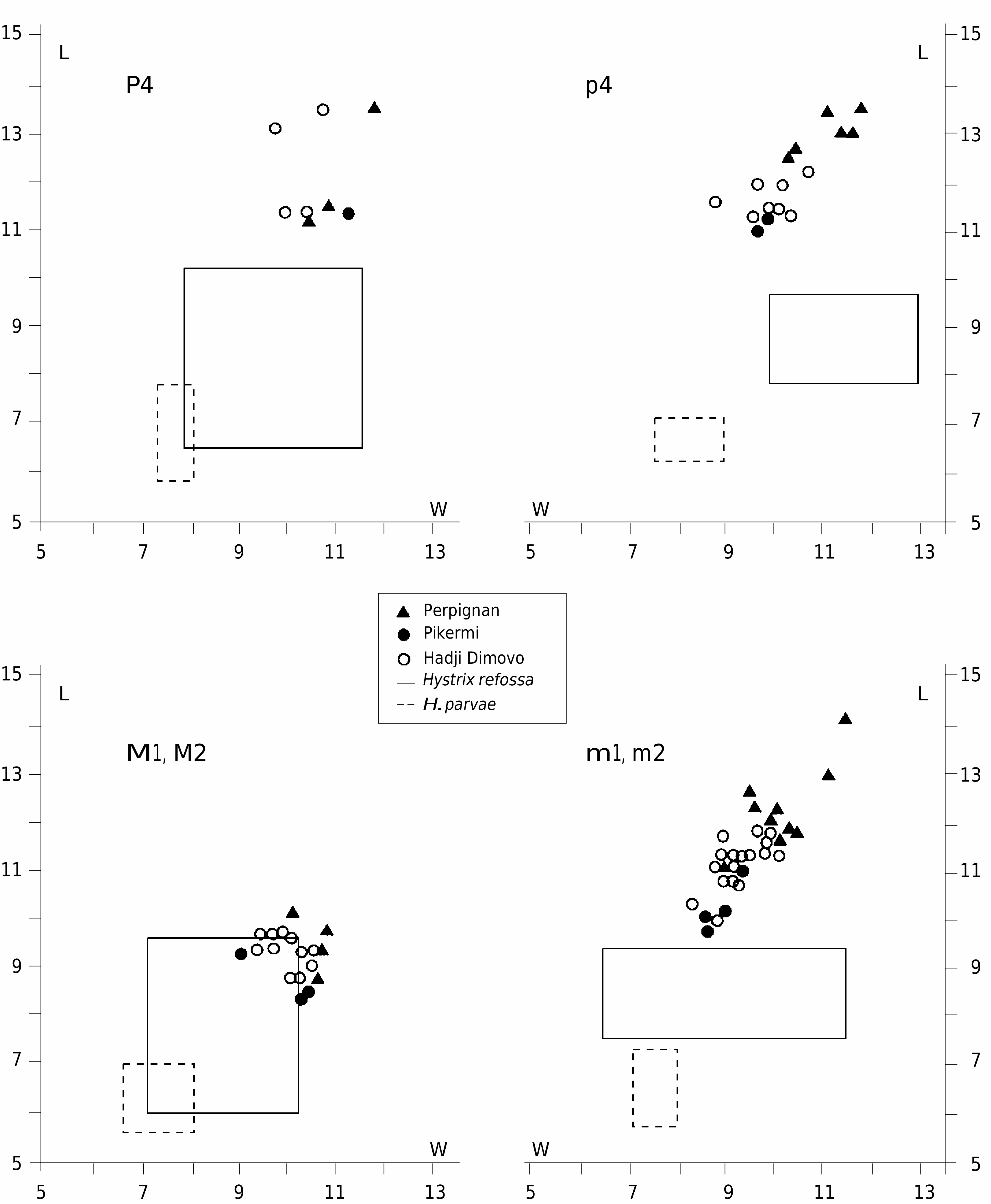