Comments. According to the revision by Gertsch & Platnick (1980), Calommata   differs from all other atypids by the transversal thoracic furrow, the relatively posteriorly situated ocular tubercle and the distinctive labium. Calommata   is known by one species distributed from tropical Africa to South Africa ( Blandin 1971), and six species distributed in South-East Asia and the Far East ( Platnick 2004). As far as known they live in burrows.

Description. Based on male from Israel. Colouration of carapace dull yellow with violescent margins. Carapace occurs in two forms: a trapezoidal form truncated in front (Fig. 3), and an ovoid form with forward outstretched membranous portion exposing protrusions rising on posterior parts of chelicerae (Fig. 4); both forms occur in one and the same locality and no type can be ascribed to any distinct population. Large AME separated from each other by less than diameter of one AME. Labium dark coloured and slightly concave in front (Fig. 8). Sternum glabrous, yellow with fine brown margins; longer than wide; sigilla indistinct (Fig. 8). Chelicerae with row of about 8–10 long sharp teeth and a few small external denticles placed at basal part (Fig. 6). Basal portion of palpal endite slightly longer than distal elongated portion; inner side of distal elongation with straight furrow densely lined with fine bristles (Fig. 5).Yellow slender palpal femora slightly longer than light-brown expanded tibiae (Fig. 2). Legs weakly covered with bristles; dorsal-ectal side of patella, tibia and metatarsus of posterior two pairs of legs armed with groups of short spines; tarsi of posterior pairs of legs are longest segments of all legs; leg formula: IV, I, II, III. Body sparsely covered with inconspicuous bristles. Brown opisthosoma, mottled with fine light dots and with one large light patch on sides; small coriaceous scutum situated dorsally at anterior third.

Female. Adult females have not yet been collected in Israel, only a young one in an early molting stadium was found so far. A description is not given as it cannot be based on specimens from this region.

Diagnosis. Based on male. Calommata   species are very closely allied and can be distinguished from each other by very few subtle differences. Males were rarely described. Considering Benoit's (1967) description of the African C. simoni Pocock   the Calommata   male found in Israel differs by the more slender and longer palpal embolus, the narrower space between the AME, the indistinct sigilla on the sternum, and by the absence of a pair of very long macrosetae on the distal part of metatarsus IV.

Comments. Over 60 adult males were collected by pitfall traps in November 2001 at five different sites in the Judean foothills of Israel. Despite intensive searches, no burrows of the females have yet been detected. The occurrence of Calommata   in Israel sheds intriguing light on the distributional pattern of an old mygalomorph element. Apart from C. simoni   , only two other Calommata   males, both from East Asia, were described: C. sundaica (Doleschall)   and C. signata Karsch. Whether   the males of the East-Asian species can be separated with certainty from each other or from the Israeli species, is rather questionable on the basis of the available descriptions. Considering the paucity of information on the faunae of the vast Asian areas, the older name, sundaica   , is selected for the Israeli species for the time being, albeit the large distance between the populations. 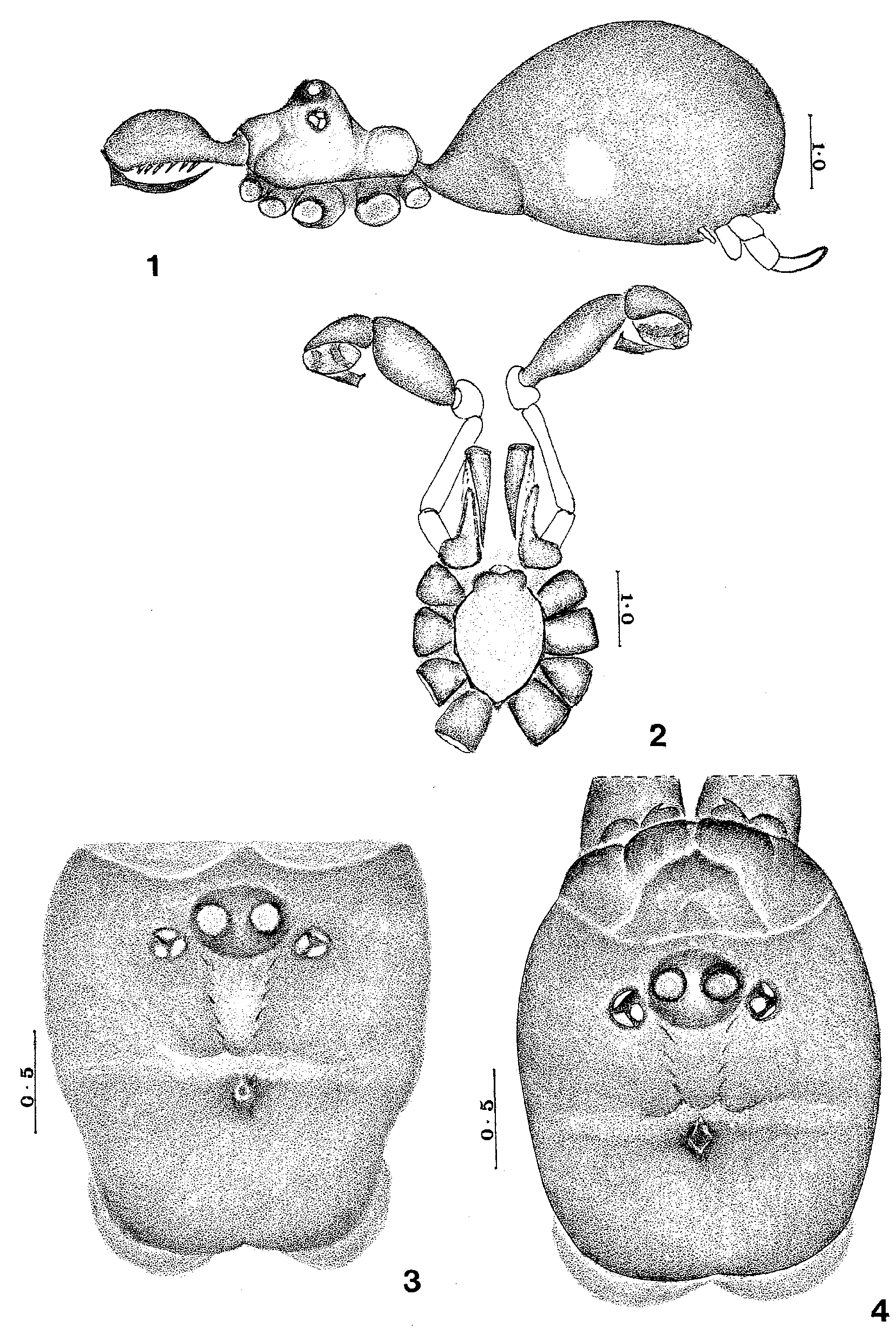