Small, profusely branched shrub 0.5-1.2 m tall; internodes 1.5-7.0 × 1.2-2.4 mm. A thick indument of pinoid trichomes densely covering and totally concealing the surface of branches, petioles, both surfaces of young leaves, bracts, pedicels, hypanthium, calyx lobes outside surface, and fruits, the indument reddish-brown (cinnamon) colored on young parts and becoming darker, maroon-brown, and caducous on older organs, leaving the base of older branches and the adaxial surface of leaves with scattered trichomes. Leaves decussate, the petiole erect and nearly parallel to the stem, and the blade ascending at an angle of 90-120 º with the petiole, 11.8-35.1 × 2.2-10.5 mm, narrowly elliptic to na rrowly lanceolate, coriaceous, with 15-22 pairs of faintly visible nerves adaxially, the base acute, the margins revolute and remotely crenate, the minute teeth dark, the adaxial surface dark green with scattered pinoid whitish trichomes on the surface and covering the midrib, the abaxial surface concealed by the indument, the apex bluntly acute and mucronate; petiole 1.6-4.5 mm. Inflorescences 10-20 mm, panicles, terminal at the tip of the branches or on short lateral branches, 1-3 flowers open at a time; bracts 3-9 mm, spatulate, persistent. Hypanthium 1.0-2.4 mm, campanulate, maroon red, glabrous inside. Flowers 5-merous; calyx lobes ca. 1.2 × 1.2 mm, maroon red and glabrous adaxially, the external teeth thick, ca. 0.35 mm, projecting, concealed by the indument. Corolla pale yellow, the petals 1.3-2 × 1.5-1.7 mm, concave, the apex oblique, the margin minutely erose, the outer surface granulose. Stamens 10, slightly dimorphic in size, the filaments 2.0-2.3 mm, geniculate above the middle, twice as wide below the folding point towards the base, cream colored, tinged with pink in older flowers, the anthers 0.9-1.2 mm, 2-celled, obovate, retuse at apex, initially uniformly cream colored and later tinged with pink, opening by two broad, apical, ventrally inclined pores, the connective at the base ventrally with a blunt, bilobed appendage and dorsally with a blunt, minutely notched tooth, slightly longer than the ventral lobes; ovary 3-celled, 3/4 inferior, ridged, with a ring of pinoid trichomes at the apex, the style ca. 3.5 mm, straight, pale yellow, glabrous, the stigma clavate but not conspicuously so, pale yellow. Infructescences with up to 22 mature fruits. Berries 5-7 × 5.5-7.5 mm, nearly globose, fleshy, the surface concealed by the indument, maroon red apically, ridged and with a few trichomes at the base of the attachment of the style; seeds 15-25, globose, ca. 0.99 × 0.93 mm.

Miconia machinazana   has only been found on the Machinaza plateau, one of the highest-elevation Hollín Sandstone plateaus in the Cóndor region between 2315 and 2420 m ( Fig. 5 View Figure 5 ). The area is precisely on the Ecuador-Peru international border, near the end of the trail from the Paquisha Alto military post. Since the population actually straddles the border it is recorded as occurring in the province of Zamora-Chinchipe in Ecuador and in the department of Amazonas, Peru.

The specimens collected in June have just a few open flowers and several fruits, while the specimens collected in March have abundant fruits. The Cóndor is an eastern outlier of the main Andes chain and has revealed a fascinating and unexpected biogeographical connection between the sub-Andean cordilleras and the Guayana Shield in northeastern South America ( Ulloa Ulloa and Neill 2006). The soils are very nutrient-poor, and consist of a bare sandstone substrate or coarse- to medium-grained quartzite sand derived there from. The vegetation is mostly dwarf scrub, dominated by shrubs to about 0.5 m tall, with occasional small trees to four meters tall ( Fig. 5 View Figure 5 ). The vegetation seems to be recovering slowly from an extensive fire that occurred between 1990 and 1995, with charred woody stems in abundance on the ground.

The species name machinazana commemorates the name of the Machinaza plateau and river in the Cordillera del Cóndor area where this species was collected.

Miconia machinazana   has a restricted distribution, only known from scattered populations within a single mountain range. The Area of Occupancy (AOO) of the species is 3 km2 and it falls completely outside any protected area under Ecuador’s System of Protected Areas. In terms of our current knowledge, the species is assigned a provisional IUCN (2001) conservation status of Critically Endangered ( IUCN SPWG 2010). 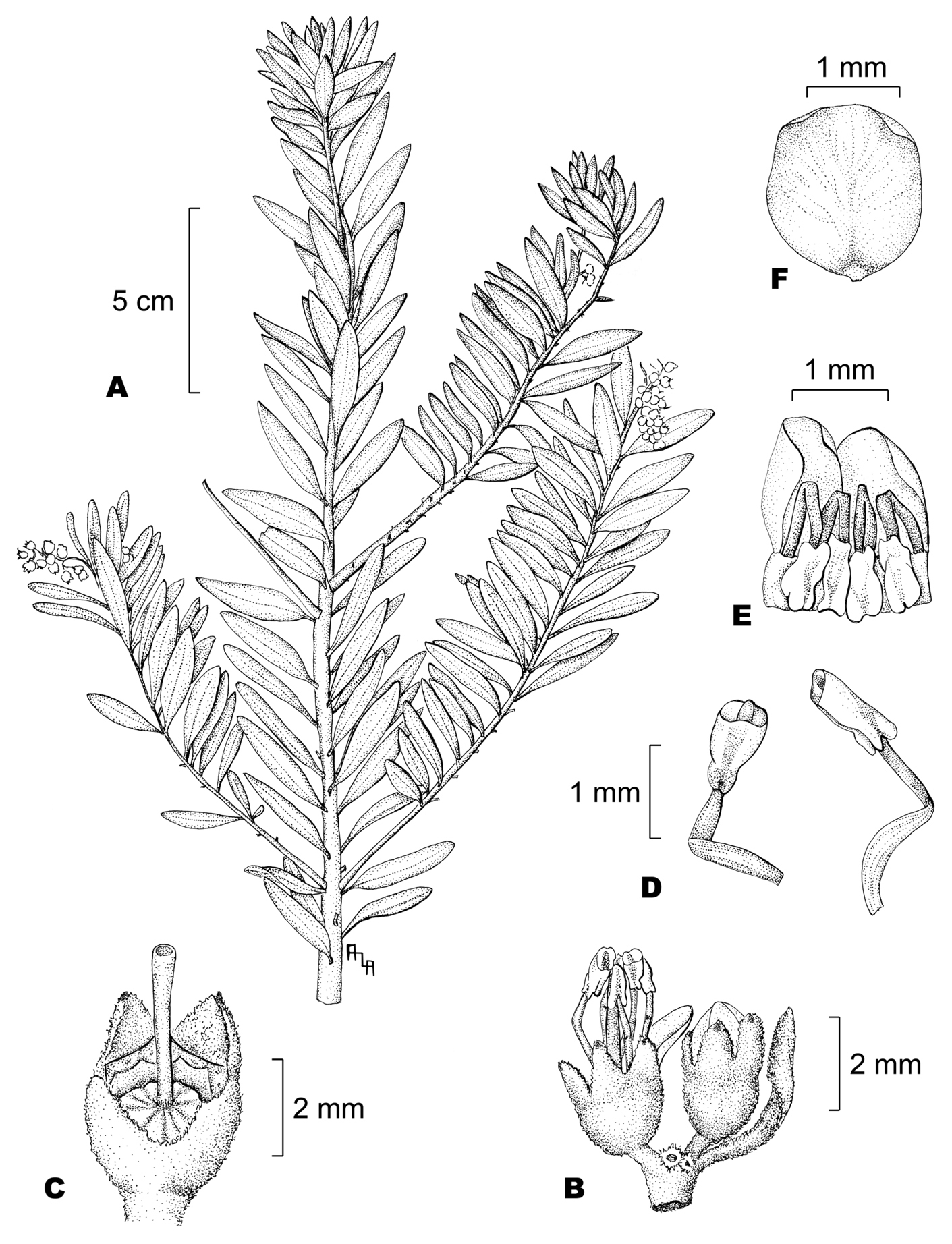 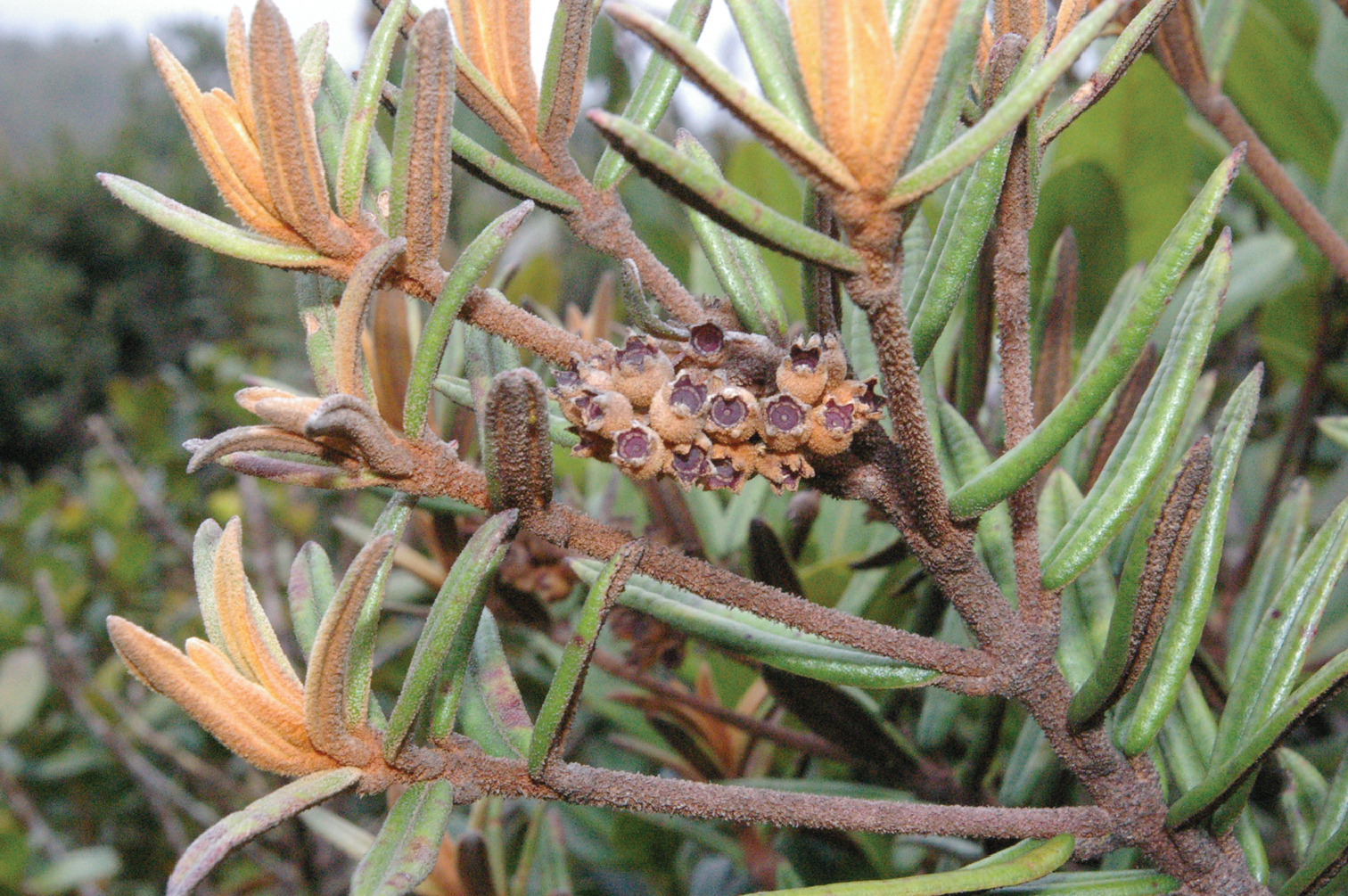 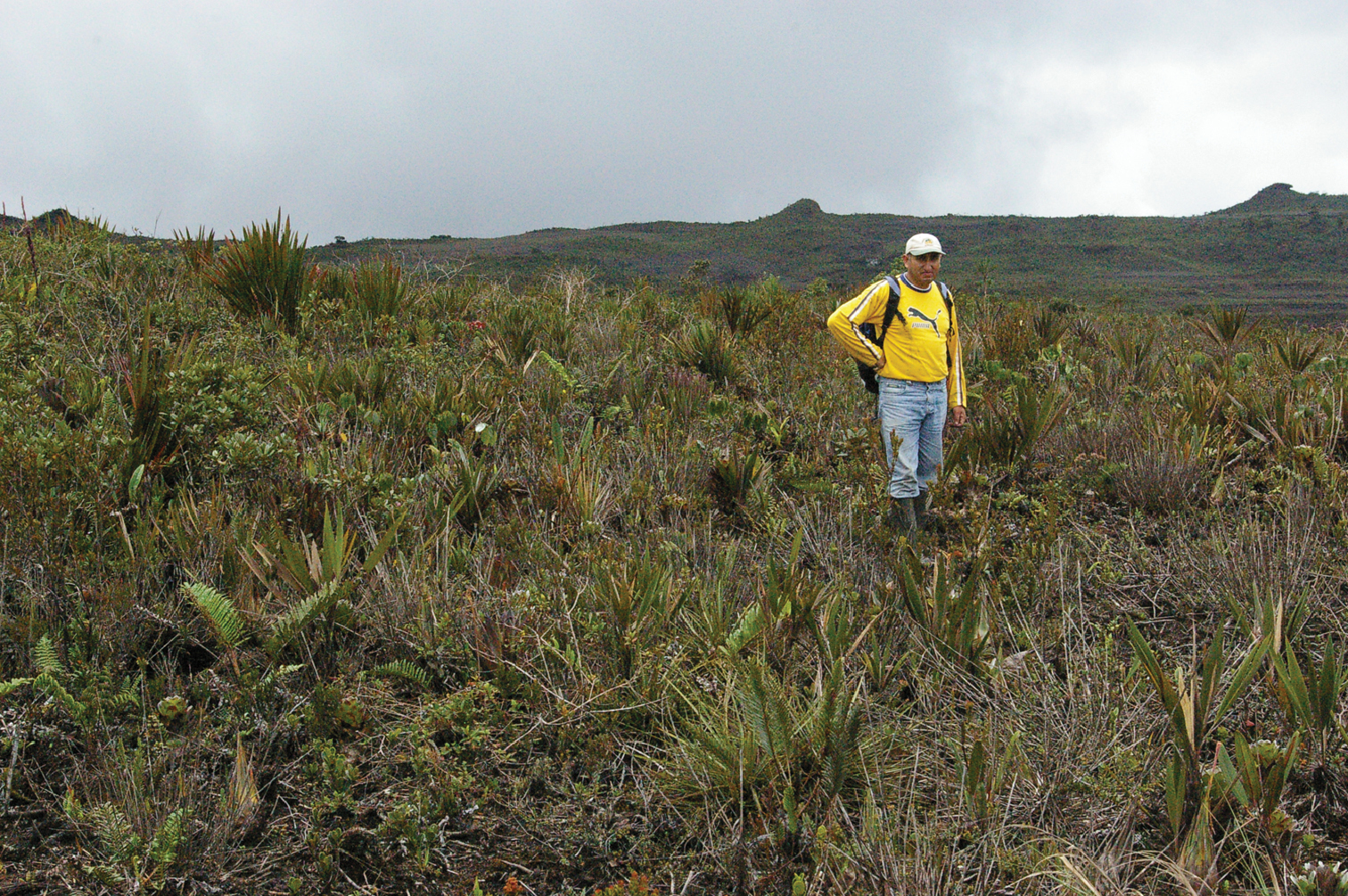