Specimens examined. Three damaged adult parthenogenetic females from a single slide from the collection of H.J. Dumont, now housed at the Royal Belgian Institute for Natural Sciences, Brussels (Accession Number RBIN INV IG 32.094), labeled “ Alona milleri   ?”. Slide & specimens were in a bad state, only few characters could be investigated. Collector Unknown, Hanoi, Irrigation Channels, 1995. All USNM types investigated that were labeled as A. milleri   , corresponded to Coronatella   , not A. milleri   .

Headshield with wavy posterior margin and typical arrangement for the genus with two connected main pores and two lateral pores with cosmaria ( Fig. 1 View FIGURE 1 B). Cosmaria with five lobes and deep constrictions ( Fig. 1 View FIGURE 1 B, arrow). Main head pores close to the posterior margin, at less than half one interpore distance, and lateral pores at about one interpore distance from the midline and just anterior to the main pores. Eye and ocellus of approximately same size.

Antenna ( Figs 1 View FIGURE 1 D –E) with long distal spines, about one and a half to two times as long as the distalmost segments that carry the respective spine. Basal exopodite spine reaching up to half the third exopodite segment. Setae not studied.

First limb with two IDL setae ( Fig. 1 View FIGURE 1 F), of which the largest is modified, with a strong chitinized spine emerging halfway and a distal portion about as long as this spine. The smaller IDL seta is not modified and bears no thick spine, only implanted unilaterally with small setules in the distal half. Other limbs not studied.

Diagnosis. Anthalona milleri   has a conspicuous postabdomen within the genus. The postabdomen, has a widened postanal portion and long lateral fascicles, reaching half their length or more over the dorsal margin. The structures underneath the lateral head pores (cosmaria) count five constrictions, unique in the genus. Within the region, A. milleri   is a conspicuous species, that cannot be confused with A. harti   or A. obtusa   , as both species have a more compressed postabdomen. The general postabdomen shape with expanded postanal portion could be confused with A. sanoamuangae   , recently described from Thailand ( Sinev & Kotov 2012). A comparison of both postabdominal outlines is shown in Figure 2 View FIGURE 2 . A. milleri   has a relatively longer, more slender terminal claw, about four times as long as the basal spine, versus about three times as long as the basal spine in A. sanoamuangae   . A. milleri   has a more protruding and angular posterior margin, with no embayment near the basal claw, in A. sanoamuangae   this portion is more convex and with a clear embayment near the claw base ( Fig. 2 View FIGURE 2 ). In addition, A. milleri   has a highly unusual feature, the presence of basal spines on the marginal setae. Finally, in A. sanoamuangae   , the two IDL setae are not modified into scrapers, in A. milleri   only one is.

Distribution and ecology. Anthalona milleri   is only known from Vietnam and Southern China, yet could have a wider occurrence in South East Asia (e.g., Laos, Thailand). In total, only three records could be confirmed: (i) Kiser’s original record from the terminal section of the Pearl River in Guangdong Province ( China) ( Kiser 1948), (ii) Unnamed irrigation channels in Hanoi ( Vietnam) (current study), and (iii) A second Chinese record, from Shenzen Reservoir, Guangdong Province ( China) (Dumont H.J., unpublished). The latter record was positively confirmed during a research visit at the Hydrobiology Institute, Jinnan University, Guangzhou ( China), yet unfortunately the single, complete specimen was lost before notes could be made. Sampling in Shenzen Reservoir (water supply Hong Kong) did not yield additional specimens. Li et al. (2011) mention A. milleri   from reservoirs in Hanoi Island ( China), yet this is not confirmed ( Sinev et al. 2015) and can be regarded as identification error. In fact, there are many records in Chinese literature (e.g., Chiang & Du 1979, Chen & Chen 2010, Ji et al. 2015) that should be treated as uncertain, as smaller Alona- like taxa are easily misidentified. Smirnov (1971) includes a short note on the possibility of A. milleri   in the South East of Russia, which is not confirmed. The records from Thailand (e.g., Sanoamuang 1988, Maiphae et al. 2008) mentioned in Korovchinsky (2013) correspond to A. sanoamuangae ( Sinev & Kotov 2012)   .

To conclude, at present, we should assume that there are no unambiguous records of A. milleri   outside China and Vietnam. In fact, so far, all reliable records are in (Guangdong, China) or near (Hanoi, Vietnam) the Pearl River system. The species might be restricted to lotic environments. All records are hitherto from lotic (river, channel) or open water (reservoir) rather than lentic settings, unusual for chydorids. Kiser (1948) found A. milleri   sympatric with Nicsmirnovius eximius   , a species that is restricted to riverine environments ( Van Damme et al. 2003), in the presence of Coronatella rectangula (Sars, 1861)   and Alona costata Sars, 1862   . 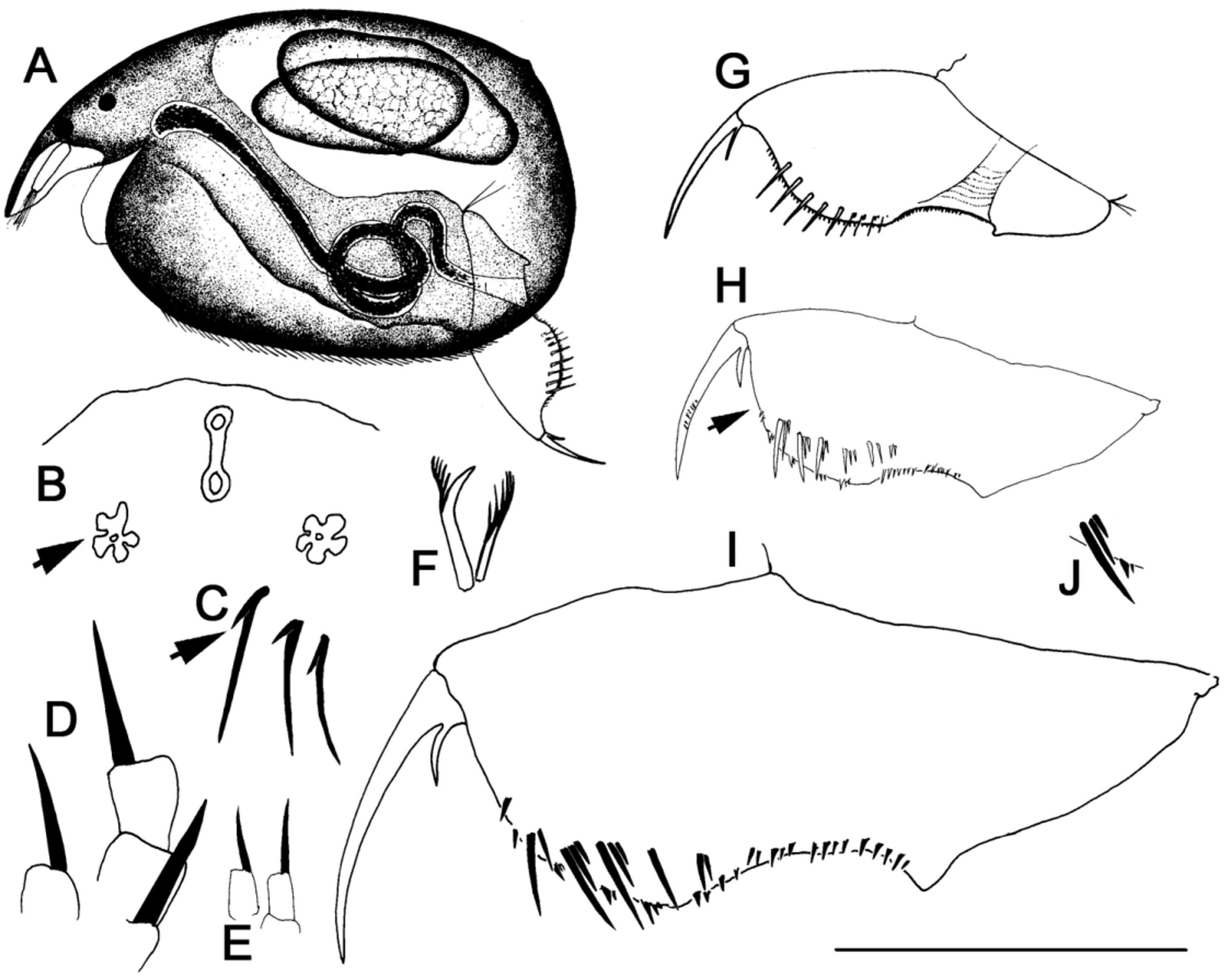 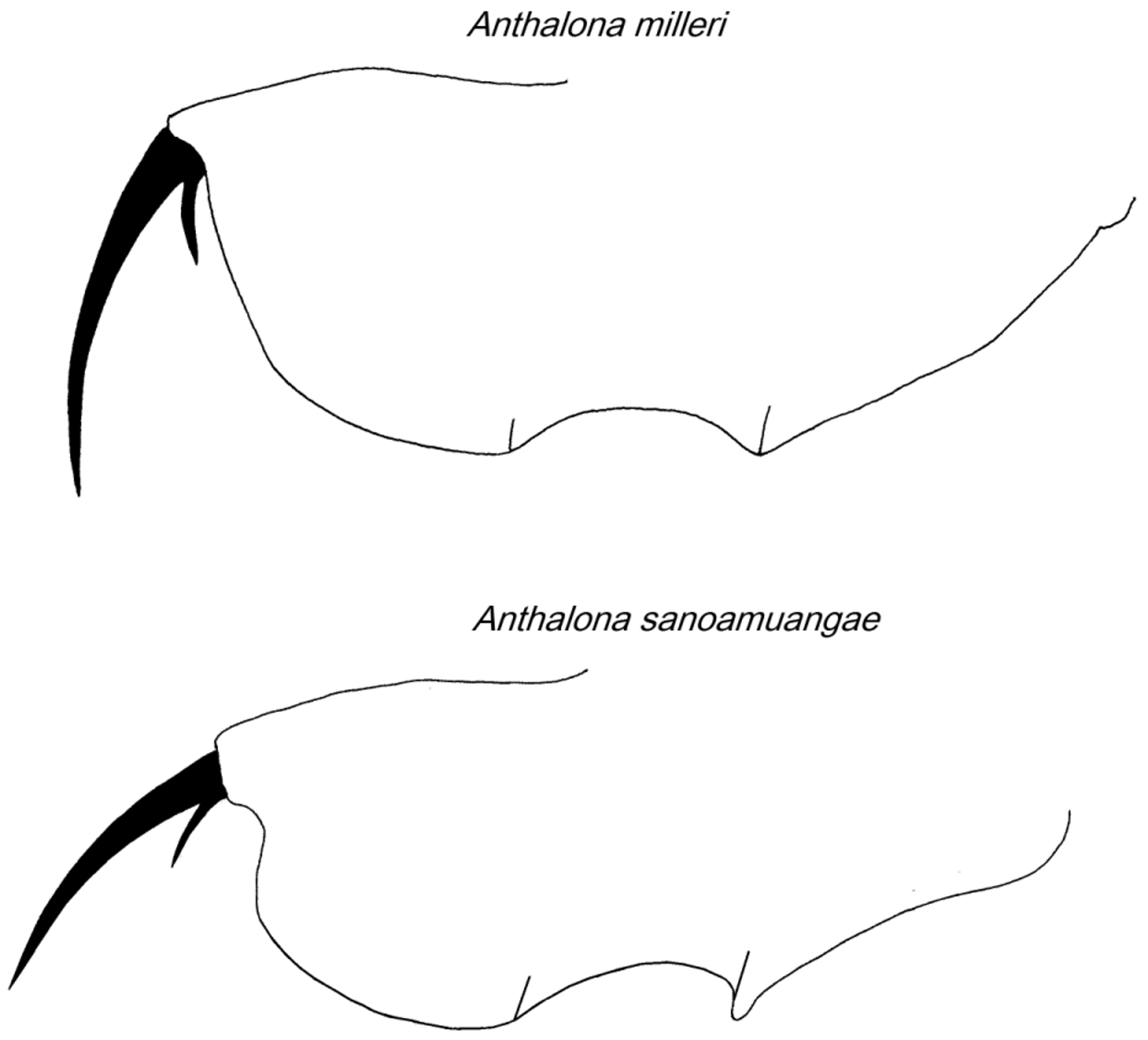