Etymology. This species is named linda  in honor of my wife Linda  C. Pritchard and is to be treated as a noun in apposition. The meaning of this word in Spanish (“beautiful”) is also fitting for this attractive species that occurs in a predominantly Spanish-speaking country.

Variation in paratypes. Several of both sexes either lack the pale green triangle anterior to the occipital bar or it is reduced as an ill-defined spot. Three males with black on S7 restricted to proximal one-quarter while on six females S7 is nearly all black except for a narrow band of orange at distal end.

Four paratypes (3♂ 1♀) from 12 km E of Arenillas, El Oro Prov., 29 March 2008, are immature. Corresponding black areas on the head and thorax of mature individuals are orange. Postocular spots vary from lacking (undifferentiated from remainder of head dorsum) to ill-defined or well-defined pale blue. The pale antehumeral stripe is pale bluish green and another similar poorly defined stripe is adjacent to the ventral edge of the dark humeral stripe.

Diagnosis. The male caudal appendages of Leptobasis linda  are most similar to the allopatric L. candelaria Alayo, 1968  , and L. melinogaster González-Soriano, 2002  , in that the strongly medially curved paraprocts are much longer than the cerci; however, the cerci and genital ligula differ from both, and L. linda  lacks the unusual metafemoral spines characteristic of L. candelaria  . The acutely triangular postocular spots and general coloration further differentiate male L. linda  from both L. candelaria  and L. melinogaster  .

The ovipositor of Leptobasis linda  is similar to those of the majority of known Leptobasis  in that the dorsal margin is nearly linear in lateral view, but the posterior margin of the prothorax is unique in its combination of characters: continuous, lacking a supplementary inferior lobe, nearly straight (very slightly concave) medially, and joining the lateral margins at broadly obtuse angles (rather than evenly rounded).

Leptobasis vacillans Hagen in Selys, 1877  , is the only congener known to be sympatric with L. linda  . The overall coloration of both is superficially similar except that the former has a greater extent of reddish orange on the base of the abdomen. Males are easily differentiated by the caudal appendages—particularly the shape of the paraprocts and their length relative to the cerci ( Fig. 8View FIGURE 8). Additionally, the median cleft on the dorsoposterior margin of S10 is much more developed and raised into a prominent dorsal process on L. vacillans  , unlike the poorly developed median cleft of L. linda  . Females of both species are similar structurally, although they differ by the posterior margin of the prothorax (evenly rounded on L. vacillans  ; more angular on L. linda  ). The black mark on the sternite of S8 on females differs: roughly rhombus-shaped on L. linda  with its greatest width about 1/3 the length; restricted to a narrow line on L. vacillans  (D.R. Paulson, pers. comm.). L. linda  averages larger than L. vacillans  (compared with measurements in Garrison & von Ellenrieder 2010), but the ranges overlap.

Distribution, habitat and biology. Leptobasis linda  is thus far known only from Ecuador in the western provinces of El Oro, Los Ríos, and Manabí, but it is probably more widespread across the Pacific lowlands of the country and may also occur in Peru and Colombia ( Fig. 9View FIGURE 9). Habitats include small, low-gradient streams under or near forest cover, grassy marshes associated with small streams, and shallow forest pools. Elevation ranges from approximately 200 meters asl to below 100 meters asl where the species was more frequently encountered.

Only one or two individuals of Leptobasis linda  were found at the remaining sites in 2008 and 2010. At a small stream and borrow pit northwest of El Carmen, Manabí Province, on 28 February 2010, a single teneral L. vacillans  was collected, and thus far this represents the only known site of sympatry with L. linda  . 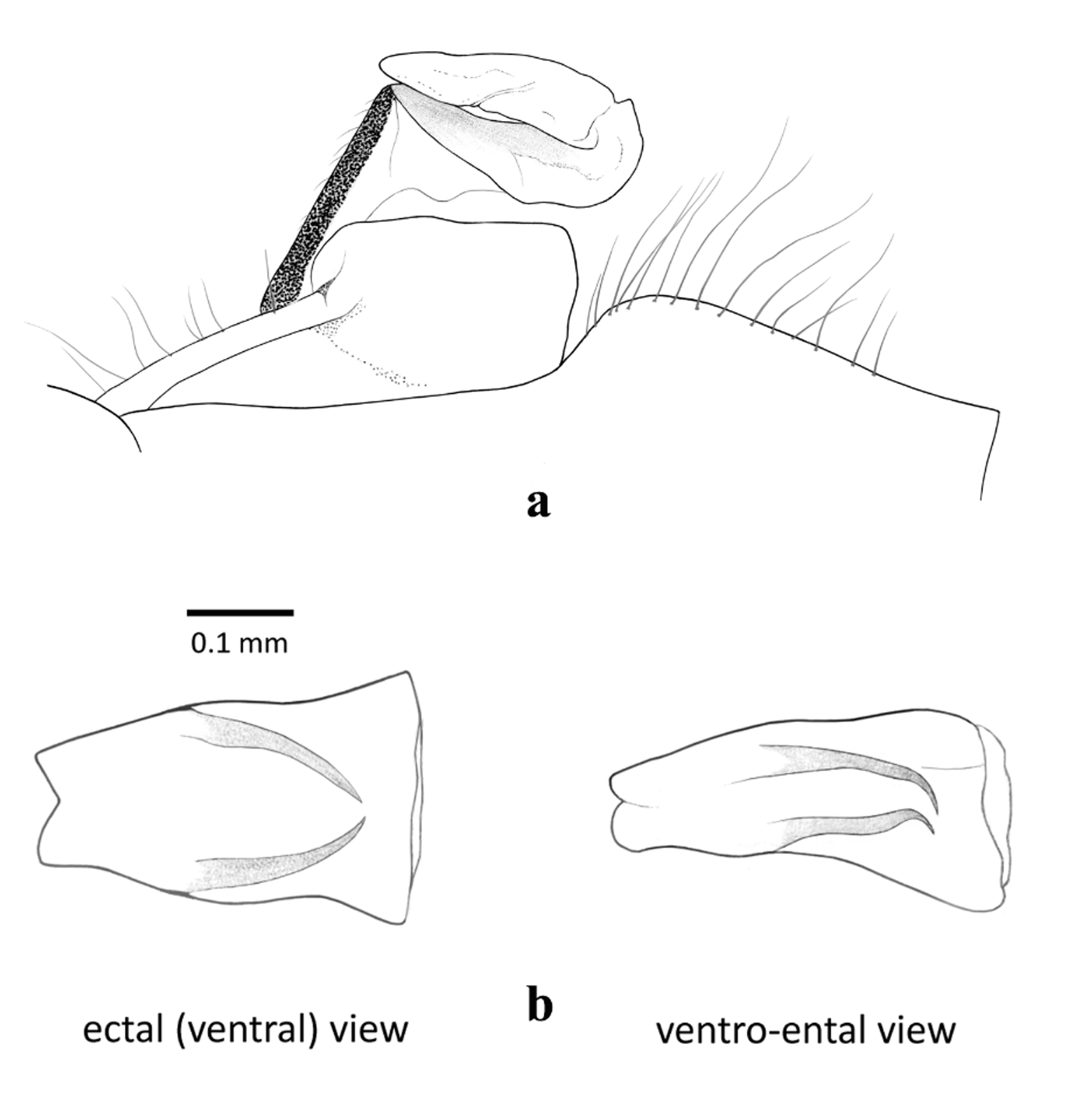 FIGURE 3. S 2 and genital ligula of Leptobasis linda holotype, lateral view (a); separated terminal segment, ectal and ventroental views (b). The ectal view of the terminal segment includes the pair of long, basally directed filaments, although they are on the ental surface.