Type material examined. Lectotype female [ ZMUC], here designated to avoid the existing confusion regarding the type specimens of this species, on slide ( Fig. 309View FIGURES 309 – 311) labeled: “ Gonatocerus  (“ ater  ” group) [in J.T. Huber’s handwriting] Fort. Indelukke. 18 - 9-28. Paa Asp. Villig til at stikke Idiocerus  – AEg Ƥ O. Bakkendorf.”. The lectotype ( Fig. 312View FIGURE 312) is in fair condition, complete but with a few segments of the appendages detached, mounted dorsoventrally. “Paa Asp.” means “on aspen”, “Villig til at stikke” means “eager to sting”, and “AEg” means “egg” (Lars B. Vilhelmsen, personal communication). The label information likely refers to the note by Bakkendorf (1934) under “Oviposition” (p. 33): “On September 19 th, 1928 I had an opportunity to observe the egglaying of Lymaenon tremulae  on branches of aspen with eggs of Idiocerus  (fig. 49)”. Even though this specimen was not marked by Bakkendorf as L. tremulae  and the date on the label is one day earlier than the published date, it is very likely that this female was part of his unmarked syntype series of L. tremulae  , particularly because it fits perfectly the original description and the illustrations: the ovipositor is only a little exserted (see Bakkendorf’s figs 44, 48, and 49, pp. 30, 31, and 33, respectively), and F 6 of the antenna (in Bakkendorf’s fig. 45, p. 31) is clearly narrower than F 5, F 7, or F 8 and thus likely lacks mps.

Type material was not designated in the original description but Viggiani (1969) noted that he had examined a “ type ” (apparently a syntype) of L. tremulae  without providing further details, and later Matthews (1986) reported that he had examined the “ holotype ” [ ZMUC] collected by O. Bakkendorf on 11.viii. 1929 [according to Bakkendorf (1934: 69), that was the date when the parasitized eggs of the host had been collected]. That specimen was then reported as being lost from ZMUC by Baquero & Jordana (2003); according to John S. Noyes (personal communication), some of Bakkendorf’s type specimens of Gonatocerus  were lost when they were returned to ZMUC from BMNH where they had been on loan to M.J. Matthews. Matthews’ mention of “ holotype ” is incorrect according to Article 74.5 ([ ICZN] 1999) because the original description mentioned numerous reared specimens, all of which must be considered as syntypes based on Article 72.4. 1.1 ([ ICZN] 1999). Article 74.6 ([ ICZN] 1999) does not apply in this situation.

Metasoma ( Fig. 314View FIGURES 313 – 315). Petiole 0.4–0.5 × as long as wide, slightly narrower anteriorly than posteriorly. Ovipositor occupying entire or almost entire length of gaster, sometimes projecting forward beneath petiole, and exserted beyond gastral apex by at most 0.1 × own length (but sometimes just barely exserted), 2.0– 2.1 × as long as mesotibia.

Comments. As first noted by Viggiani (1969), distribution of mps on the funicle segments was indicated incorrectly in the original description of G. tremulae  (only on F 8). Among specimens I have seen most lack mps on F 6 of the female antenna except for the female from Mamontovka, which has 1 mps on F 6, the female from Askham Bog, and one of the females from Skirwith, which apparently have at least 1 mps on F 6 (both are dry-mounted). Viggiani (1969) indicated that F 5 –F 8 have mps and illustrated F 6 with only 1 mps. Matthews (1986) stated that in G. tremulae  F 6, F 7, and F 8 bear 2 mps and F 6 may have 1 or 2 mps but all his specimens from Buckinghamshire and Surrey were misidentified; they belong to G. oxypygus  .

It would be desirable to obtain fresh specimens of G. tremulae  from aspens in or near the type locality of this species in Denmark. Unfortunately, no aspen trees could be located in the type locality in September 2010 (Lars B. Vilhelmsen, personal communication).

Pricop (2010 b) reported, diagnosed, and illustrated supposedly G. tremulae  from Romania but his identification was not based on a comparison with the type material. Rather, his specimens represent G. oxypygus  with relatively short ovipositors that are not bent down at apex and are exserted beyond gastral apex by about 0.2 × own length (that is within the known variation range of G. oxypygus  and very similar to its neotype); Viggiani (1988) and Viggiani & Jesu (1988) also misidentified such specimens from Italy ( Figs 297–299View FIGURES 297 – 299) as Lymaenon tremulae  , and Donev (2005) reported similar specimens from Bulgaria as G. tremulae  . At least in one of the specimens from Romania mentioned and illustrated by Pricop (2010 b), a female from Cucoräni that I have examined, the submedian carinae on the propodeum are subparallel and close to each other (as typical for G. oxypygus  ) and not joining together at apex of dorsellum although Pricop in his fig. 1 -i (2010 b, p. 114) illustrated its propodeal submedian carinae as joining together at apex of dorsellum (also seen in his fig. 1 -j). That illustration, however, was based on the specimen from Cucoräni whose mesosoma was slide-mounted semi-laterally at an angle so that the propodeal submedian carinae were not properly visible. With Emilian Pricop’s kind permission, its body was remounted dorsoventrally at UCRC in 2012 from Faure’s medium into Canada balsam, and it became clear that its propodeal submedian carinae are identical to those of G. oxypygus  whereas in the lectotype of G. tremulae  and other conspecific specimens from northern Europe the propodeal submedian carinae are significantly more apart from each other. Resurrection of G. tremulae  as a valid species by Pricop (2010 b) was correct, even though based on misidentified specimens. 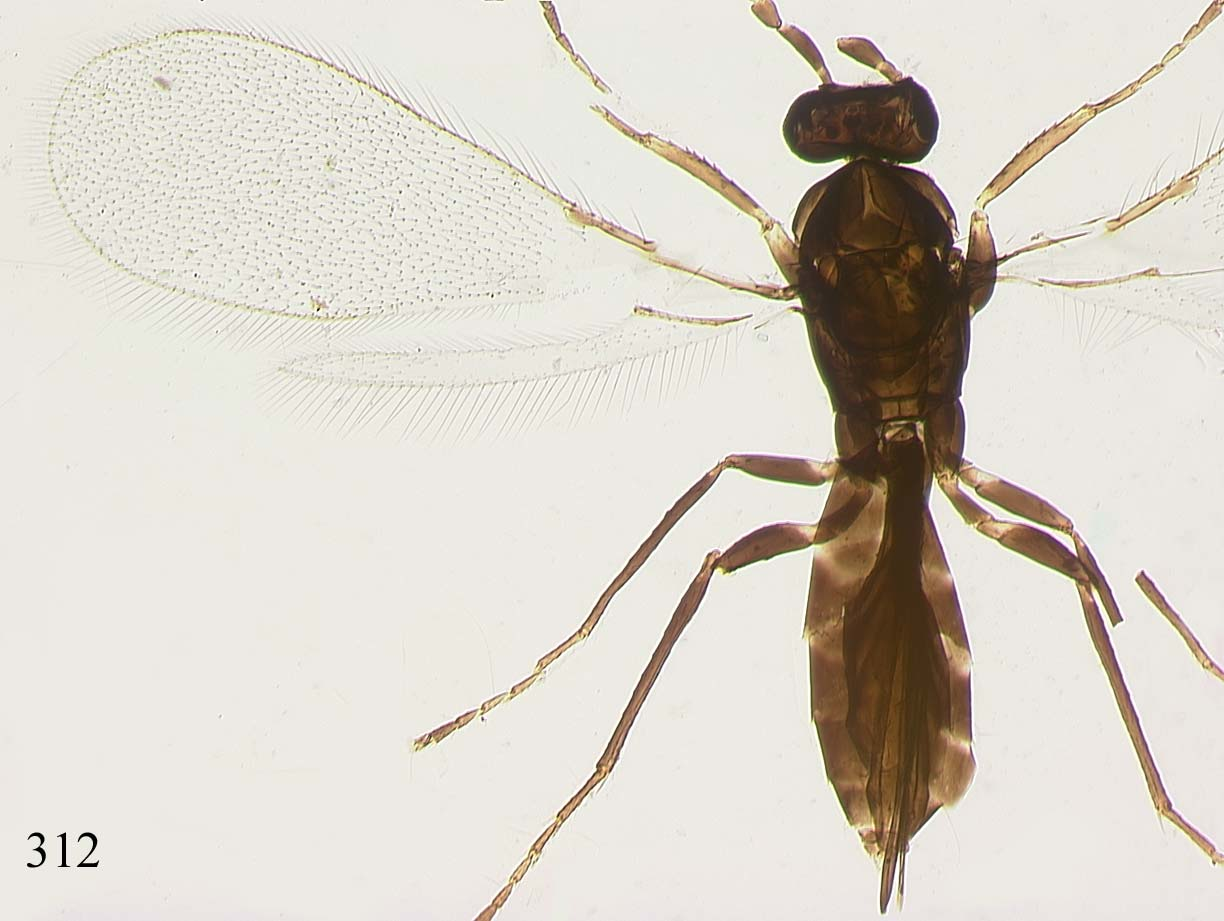 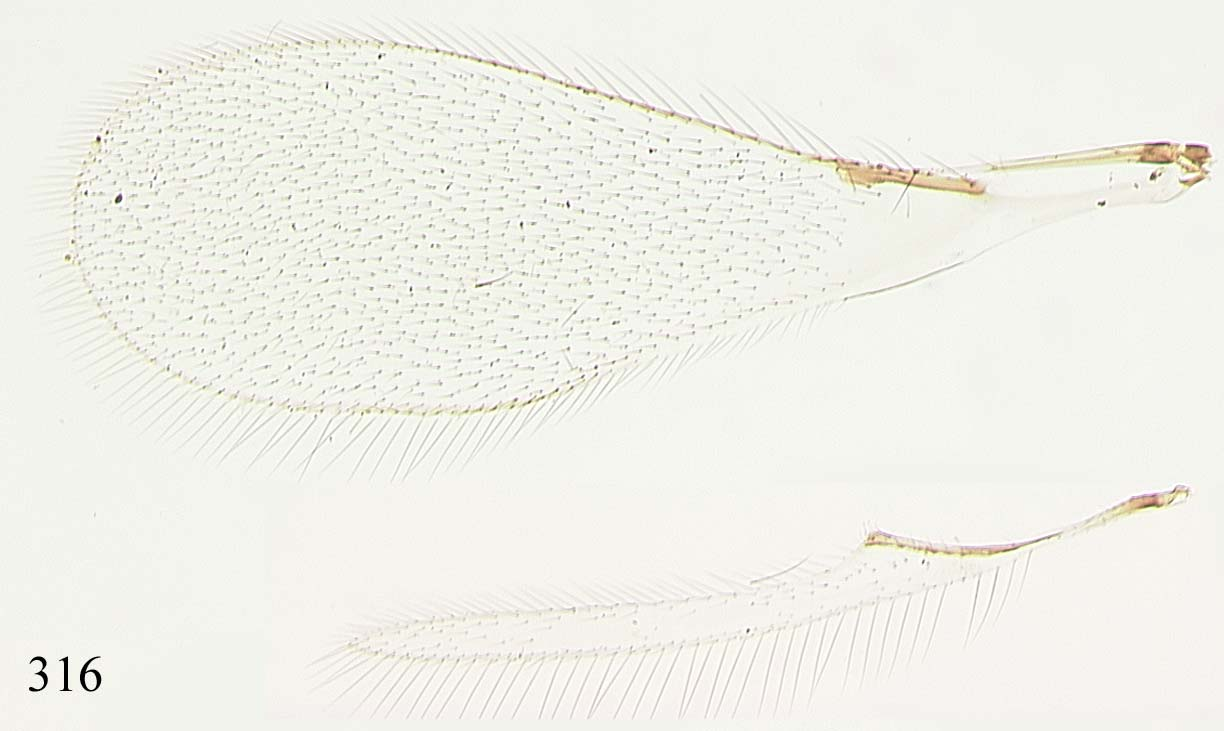 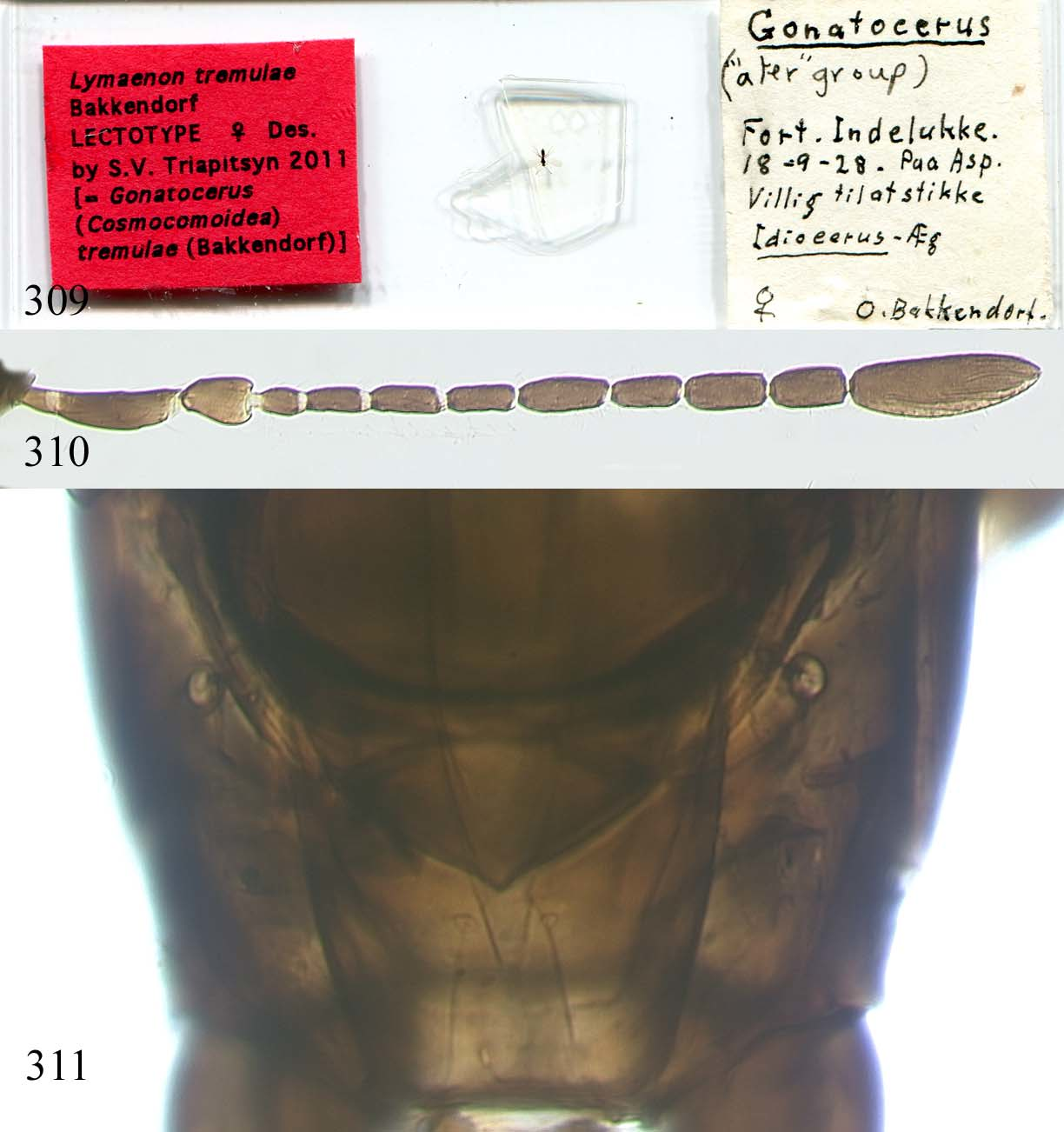 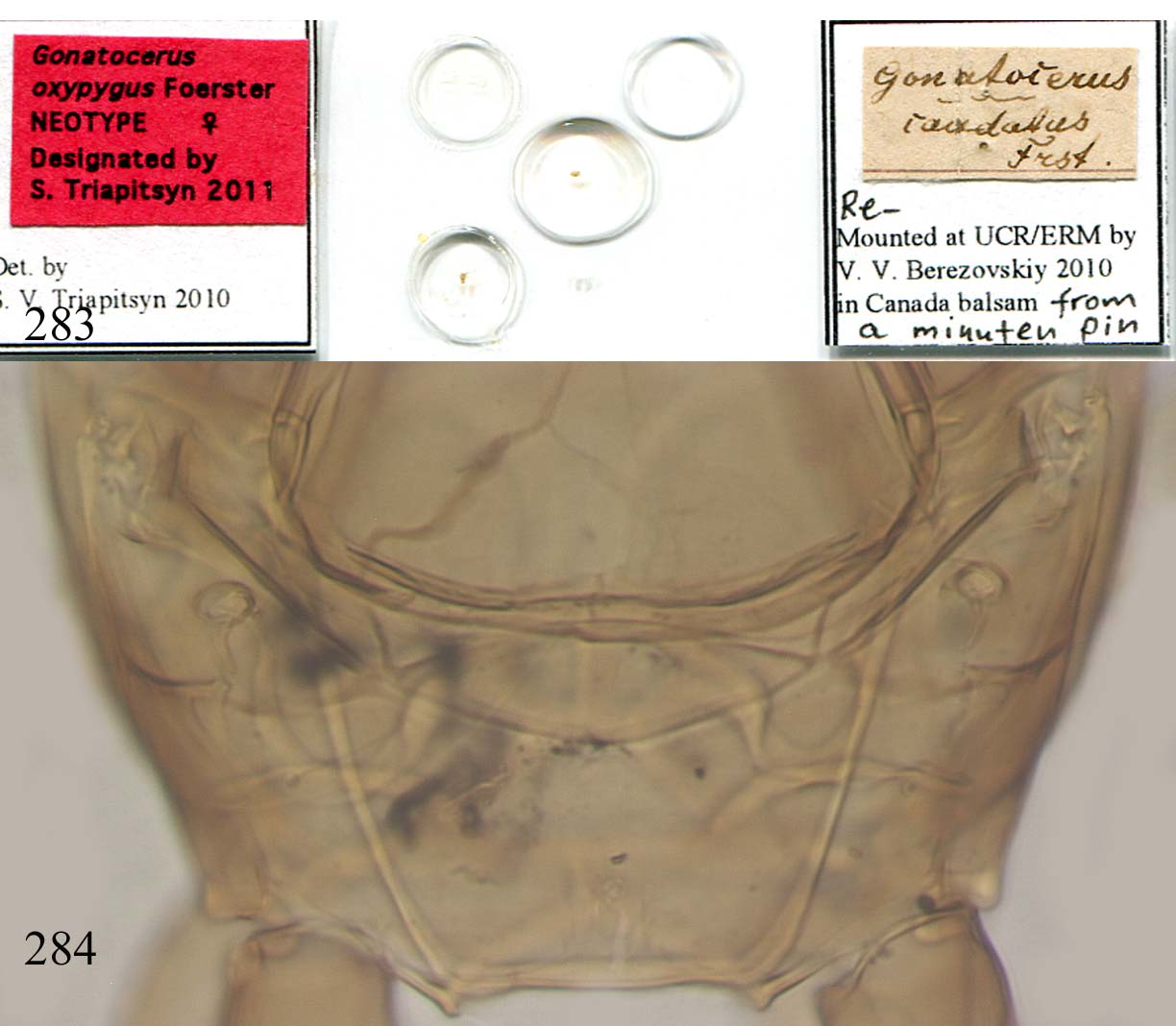 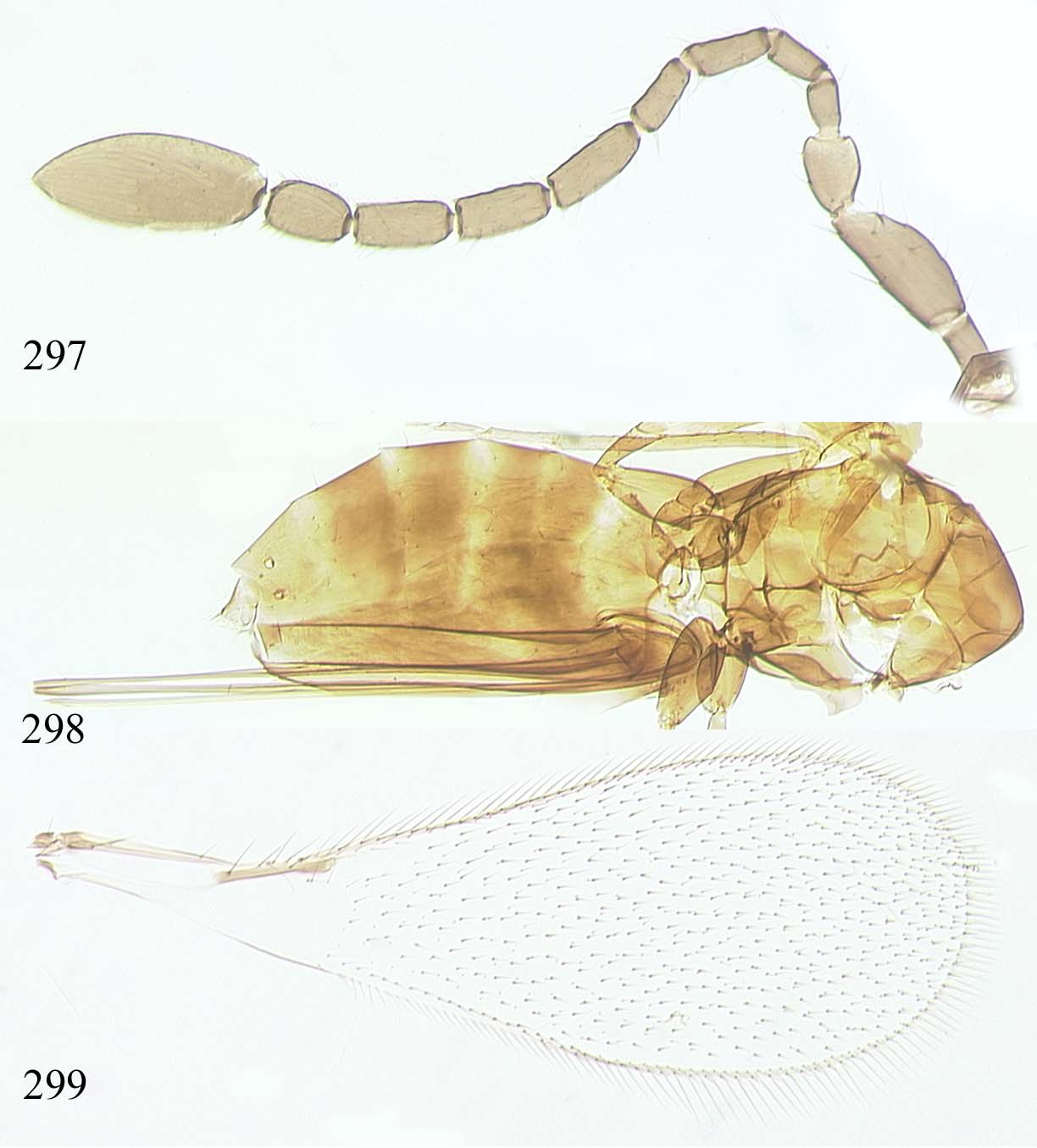