Description. Stems up to 9 cm high, arising from branched, rhizoid stolon; simple, monosiphonic, straight to slightly curved backward, divided into internodes by means of regular, well-marked, transverse nodes; basal part, of varied length, devoid of hydrocladia, bearing only abortive apophyses and groups of laterally placed nematothecae. Stem above basal part with internodes provided with two alternate, closely spaced, short apophyses supporting cladia, and three nematothecae: one at base of apophysis, the remaining two on the anterior and posterior sides of the axil made by the apophysis with the stem internode. Basal nematotheca sac-shaped, broadly triangular, generally two-spined (occasionally with an additional, frontal aperture), rim curved backward, aperture wide, slit-like, opening in the axil with the internode behind (Fig. 10 A). Axillar nematothecae similar to the former, but comparatively wider, provided with 3–4 (occasionally 5) fronto-distal apertures, rim curved inwards, aperture wide (Fig. 10 A). Cladia up to 9 mm long, divided into up to 35 short cormidia, by means of slightly oblique nodes. Hydrotheca sac-shaped, curved outward, aperture at sharp angle with axis of internode; abcauline intrathecal septum prominent, posterior margin with several centrally placed perisarcal papillae [Fig. 10 C, F); basal end of adaxial wall with a 2–4 hooks [Fig. 10 C 2, G]; rim with two lateral cusps, the anterior inconspicuous and slightly convex, followed by a prominent one, with adaxial notch. Three nematothecae associated with a hydrotheca: a mesial and a pair of laterals. Mesial nematotheca long, tubular, uniformly tapering distally, arching over the hydrothecal aperture; a small, distal aperture, as well as a basal one, in the axil with the abaxial wall of hydrotheca. Lateral nematothecae not reaching the hydrothecal margin; small, sac shaped, swollen basally, considerably narrowing distally; aperture scoop shaped (Fig. 10 E); an ovoid foramen communicating with the hydrothecal cavity. Gonothecae crowded together and alternately placed along the middle portion of the stem; given off from cladial apophyses, at mid distance between the lower and the fronto-axillar nematothecae (a foramen marking the insertion of gonotheca in visible in Fig. 10 A). Gonotheca borne on short, inconspicuous pedicel; barrel shaped, slightly widening distally, rounded basally, slightly compressed laterally; distally a watch glass shaped operculum, with radially striated perisarc.

Remarks. Three nominal species of Gymnangium   are commonly reported from the northern part of the tropical western Atlantic, viz. G. longicaudum ( Nutting, 1900)   , G. sinuosum (Fraser, 1925)   , and G. speciosum ( Allman, 1877)   . The latter two were discussed at length by both Bogle (1975) and Calder (1997), and are mainly characterized by having hydrothecae with short to moderately developed mesial nematothecae. In contrast, G. longicaudum   is distinguished through its exceedingly long mesial nematothecae and the rim of hydrotheca provided with "two shallow sinuations on each side" ( Nutting 1900). However, examination of present material shows that the indentation of the hydrothecal rim changes dramatically with respect to the angle at which the hydrothecae are seen. There is an anterior, shallow sinuation, not subjected to noticeable change when the angle of view varies, as well as a second, centrally placed, deep indentation, whose shape changes significantly, from barely noticeable to conspicuous. It is likely that Nutting (1900) overlooked this difference, as his Fig. 4 View FIGURE 4. A shows the hydrothecal rim as wavy.

In light of these new observations, one can note obvious similarities between Nutting's species and Halicornaria plumosa Allman, 1883   , originally described from the NE of Brazil. The stem size, the "deep lateral notch" on the hydrothecal rim, the considerable development of the mesial nematotheca, as well as the "wide, conical" lateral nematothecae ( Allman 1883), leave little doubt that the Brazilian species is the same as that occurring in the Caribbean. Nutting (1900) was apparently unaware of H. plumosa   , as he did not include it in his comprehensive monograph on American hydroids.

Bale (1887) indicated that the name of Allman's species had to be changed in order to avoid the homonymy with a taxon already described by Armstrong (1879), but did not proceed. Consequently, Marktanner-Turneretscher (1890) introduced the new name Halicornaria Allmani   , and applied it to Cape, South Africa, specimens, though he acknowledged that their hydrothecal rim was less ornamented and the lateral nematothecae had a narrower aperture, compared to the type 15. Indeed, the aperture of hydrotheca is described as being provided with a small cusp 16, and is also figured this way (see his Pl. 6 Fig. 23). In addition, the mesial nematotheca in these specimens is reportedly devoid of the basal, axial foramen, and the lateral nematotheca is figured with an uprightly directed aperture. I therefore suspect that this material was only given the name, but that it does not belong to the western Atlantic species.

Type material of Halicornaria plumosa   was reexamined by Billard, who provided better illustrations of the cormidium ( Billard 1910, 1912), though he figured the lateral nematotheca as having the aperture either tilted anteriorily ( Billard 1910) or uprightly and backwardly ( Billard 1912), without mentioning the scoop shape of the theca, otherwise evident from Allman's (1883) figures. Billard also confirmed that the mesial nematotheca bore a basal, axillar foramen, but he found that the axillar stem nematothecae bore only two apertures, while the basal one had three ( Billard 1912). The latter differences have, most probably, no specific importance and it would not be surprising to find some variation among colonies from various localities, as more material becomes available.

The Brazilian specimens assigned by Ritchie (1909) to G. longicauda   have the hydrothecal margin provided with a "sharp tooth projecting upwards and outwards on either side", the lateral nematothecae are "short and stout", with a gutter shaped aperture (especially visible on his Fig. 11 B), thus agreeing with the present concept of G. allmani   . However, this author noted "considerable differences" in the length of mesial nematotheca "even in two succeeding hydrothecae". It is not clear whether the occurrence of this size difference was significant or not. No such variation could be noted in the present material from Martinique, in which all the hydrothecae bear exceedingly long mesial nematothecae.

The material from the Marshall Islands assigned by Jäderholm (1923) to G. allmani   has hydrothecae and mesial nematothecae recalling those of G. allmani   , though the pair of laterals is figured with the apertures shifted anteriorily. Based on this difference, as well as on biogeographical grounds, his material could belong to a variant of G. hians (Busk, 1852)   similar to that described by Watson (2000).

The South African hydroids described and depicted by Millard (1968, 1975) likely do not belong to the present species either, due to some differences such as: 1) the presence of generally one hydrocladia per stem internode; 2) the shape of the hydrothecal rim, which has "one low but distinct tooth […] and a bay of varying depth posterior to it"; 3) the structure of the lateral nematothecae, whose apertures are situated "at the end of a tubular neck directed upwards and slightly posteriorily".

Vervoort (1968) listed some important differences between its Caribbean specimens and what he had thought to belong to G. longicauda   from Guinea ( Vervoort 1959), those features reported in his material from St. Thomas being equally present in my specimens from Martinique. 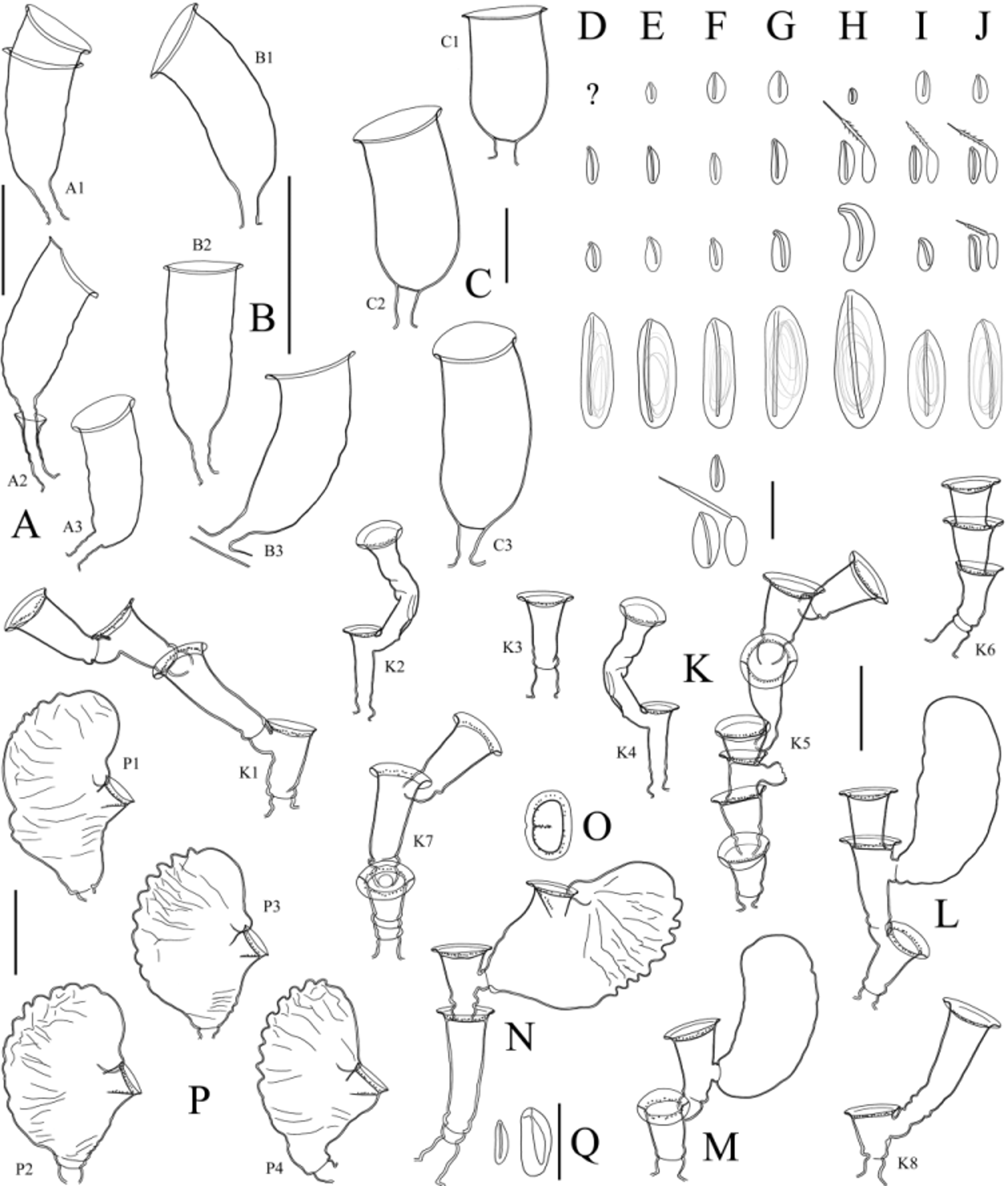