Geographical distribution. Circumglobal in tropical and subtropical waters ( Schuchert 2003). In the Caribbean, it was found in Puerto Rico ( Fraser 1944), St. Thomas ( Vervoort 1968), and Martinique (present study).

Remarks. Two Caribbean congeners, S. peculiaris Leloup, 1974  and S. fraseri Galea, 2010 a  , superficially resemble the present species, and material belonging to them was reexamined in the course of this study. They are immediately distinguished from S. calderi  through the more delicate appearance of their colonies, covered by much thinner perisarc, and their slightly smaller hydrothecae, less adnate in the former ( Fig. 6View FIGURE 6. A, B I) and with many corrugated walls in the latter species ( Fig. 6View FIGURE 6. A, B H). As to the gonothecae, those of S. peculiaris  bear 7–8 more or less distinct, incomplete transverse ridges ( Galea 2008), while those of S. fraseri  are comparatively smaller and provided with sharper corrugations ( Galea 2010 a). For a morphometrical comparison, see Table 3.

Earlier records of S. calderi  appear to be present in the literature. According to the description and illustrations given by Verrill (1907), his Bermudan hydroid assigned to S. gayi (Lamouroux, 1921)  corresponds in every respect to the present material. In the absence of formal description and illustrations, I assume that his earlier record ( Verrill 1900) belongs to the present species as well. The same applies also to the hydroid identified as S. tenella Alder, 1857  by Bennitt (1922).

In an earlier paper ( Galea 2008), I considered that the hydroids assigned to S. conica Allman, 1877  by both Calder (1983, 1991) and Migotto (1996) belonged to S. peculiaris Leloup, 1974  . In light of the present material from Martinique, and after comparison with Leloup's species, I now conclude that Migotto's hydroid belongs instead to the latter, given the size of its hydrothecae (see Table 3) and the low degree of fusion (one third) of the adcauline wall with the internode. In contrast, Calder's specimens belong to the new species under discussion here, based on the fact that their hydrothecae are adnate for half their length.

As stated by Calder (1991), the specimens from shallower waters have "smaller and more strongly annulated hydrothecae and shorter internodes", thus perfectly fitting my material. In addition, the dimensions given for his gonothecae fit better those of the males in the specimens in hand.

There is much confusion over the identity of Sertularella conica Allman, 1877  , with almost all the subsequent records apparently belonging to other species, as noted earlier by Calder (1991). According to him, type material of S. conica Allman, 1877  could not be located for reexamination. However, Allman described and figured the internodes of his species as long 6, thus appearing radically different from those of S. calderi  . The second known record of S. conica  is, in my opinion, that by Calder (1991), who identified his material as S. gayi unituba  , a new variety of Lamouroux' (1821) species. He stated that the "hydroids of S. gayi unituba  resemble those of S. conica Allman, 1877  , in colony form and size, and the hydrothecae of both species bear transverse wrinkles", but I think that he was mislead by the discovery of the gonothecae in what he called S. conica  (= S. calderi  sp. nov.). According to him, the gonothecae of S. gayi unituba  (= S. conica Allman, 1877  ) are "less strongly ridged, especially towards the base" and have "a more slender neck distally with fewer spines around the margin". I suspect that Calder's (1991) account on S. gayi unituba  is actually the first redescription of Allman's (1877) species, which further contributes with the discovery of its gonotheca.

The Cape Verde specimens assigned by Medel & Vervoort (1998) to Calder's subspecies, eventually raised to species as S. unituba  , is reported to be extremely varied morphologically, and it may or many not, partly or all, belong to S. conica  .

Sertularella calderi  sp. nov. appears to be related to a group of species including S. africana Stechow, 1919  , S. ellisii (Deshayes & Milne-Edwards, 1836)  , S. fusiformis (Hincks, 1861)  , S. mixta Galea & Schories, 2012  , S. lagenoides Stechow, 1919  , S. mediterranea Hartlaub, 1901  , S. simplex (Hutton, 1873)  , and S. uruguayensis  Mañé- Garzón & Milstein, 1973, whose common features were summarized by Galea & Schories (2012). Unlike them, S. calderi  has equally developed hydrothecal cusps (the abcauline one is not conspicuously tilted outwards), five (instead of only three) submarginal perisarc projections, and its female gonotheca is provided with a peculiar, funnel-shaped, interal structure with simple or fronded margin. In addition, its geographical distribution sets it apart from its congeners listed above.

Etymology. It is my pleasure to dedicate this species to my colleague Dale R. Calder of the Royal Ontario Museum, Toronto, Canada, for his valuable contribution to the sudy of hydroids during more than four decades. 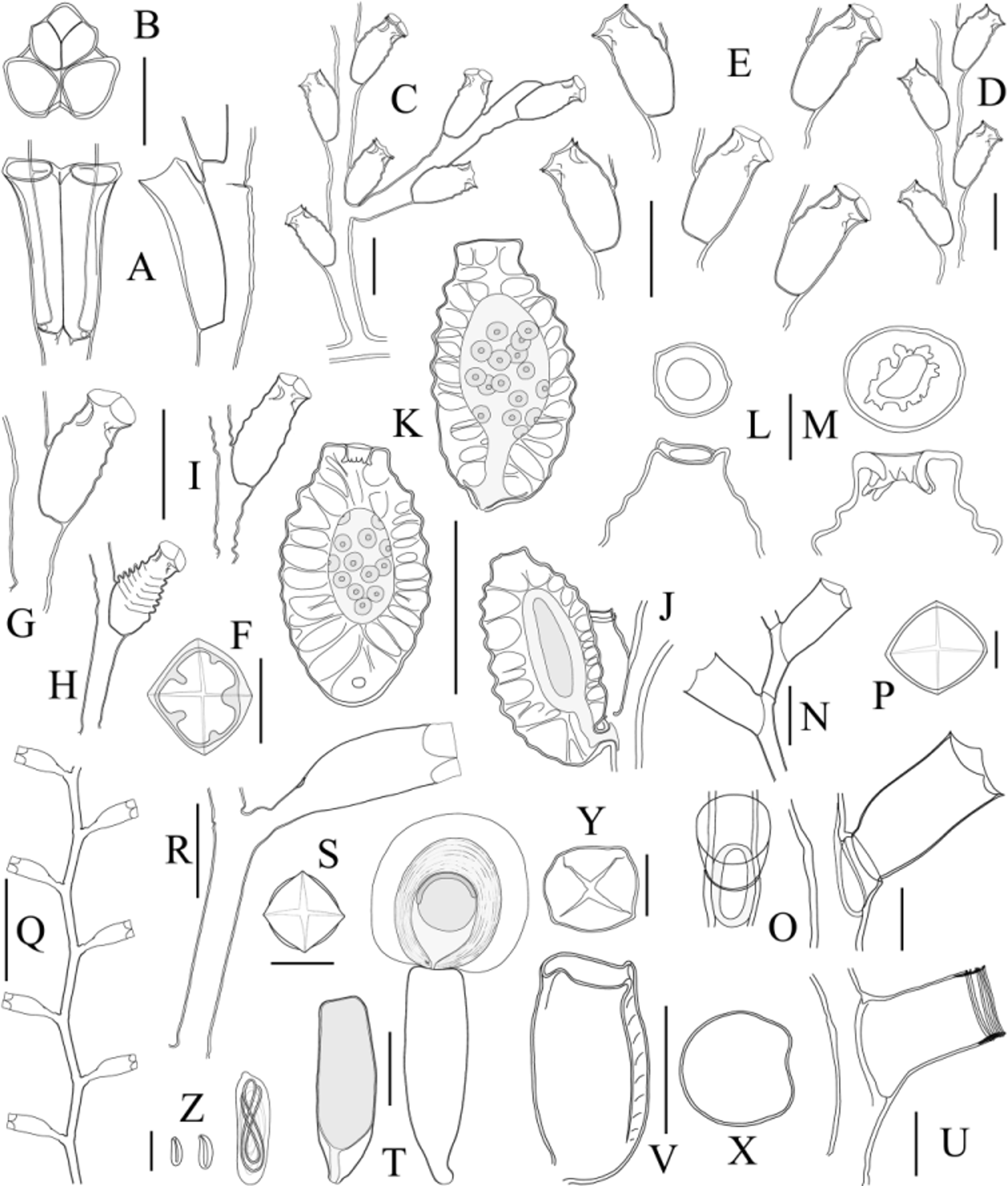