Diagnosis. Ammonicera   with a broad spiral cord ornamenting the protoconch and teleoconch, gradually fading out on the body whorl; shell diameter c. 0.6–0.7 mm at 3 whorls.

Description. Shell planispiral, tightly coiled. Shell wall very thin, pellucid, glossy, fawn in coloration. Protoconch of c. 1.4 whorls, sculptured with 1 broad spiral cord on its apical and 1 broad spiral cord on its basal surface; spiral cords closer to the outer than to the inner suture. Basal surface of the protoconch finely pitted. Protoconch 2 stage absent; boundary between protoconch and teleoconch conspicuous to poorly marked. Teleoconch of c. 1.8 whorls, with a primary spiral sculpture composed of 5 broad cords separated by 4 marked grooves; the 2 most central cords (1 apical and 1 basal) continuous with those of the protoconch; 1 additional cord positioned at the shell periphery and 2 cords (1 apical and 1 basal) subperipherally; grooves between cords c. 0.1- 0.75 the width of the central cords. Secondary spiral sculpture of the teleoconch composed of numerous very fine lirae, with interspaces approximately matching their width, overlaying the primary spiral sculpture. Spiral sculpture gradually fading out in the last 1/2 whorl of the teleoconch. Axial sculpture of the teleoconch composed of growth lines only, which become crowded in the last 1/4 whorl of the teleoconch. Apical and umbilical sutures impressed; outer lip sharply convex in the vicinity of the sutures, uniformly rounded along the apical, peripheral and basal walls; inner lip broadly concave, flaring slightly. Aperture and operculum rounded.

A. sleursi   is also similar to the Western Atlantic A. circumcirra Rolán, 1992b   , recorded from Cuba (the type locality; see Rolán, 1992b) and from the Saint Peter and Saint Paul Archipelago, Brazil ( Lima et al., 2011). However, the sculpture of A. circumcirra   is more prominent than that of A. sleursi   , particularly in the presence of weak elevations formed by the intersection of axial ribs with spiral cords. Additionally, the sculpture of A. circumcirra   appears to be persistent, rather than fading along the teleoconch ( Rolán, 1992b, fig. 23; Lima et al., 2011, fig. 5).

Mediterranean A. fischeriana Monterosato, 1869   differs from A. sleursi   in displaying a colour pattern of three spiral brown bands and in having a more pronounced axial sculpture.

Etymology. This species is dedicated to Dr. Willy J. M. Sleurs, Research Associate of the Royal Belgian Institute of Natural Sciences, in recognition of his contribution to our knowledge of Indo-Pacific omalogyrids. 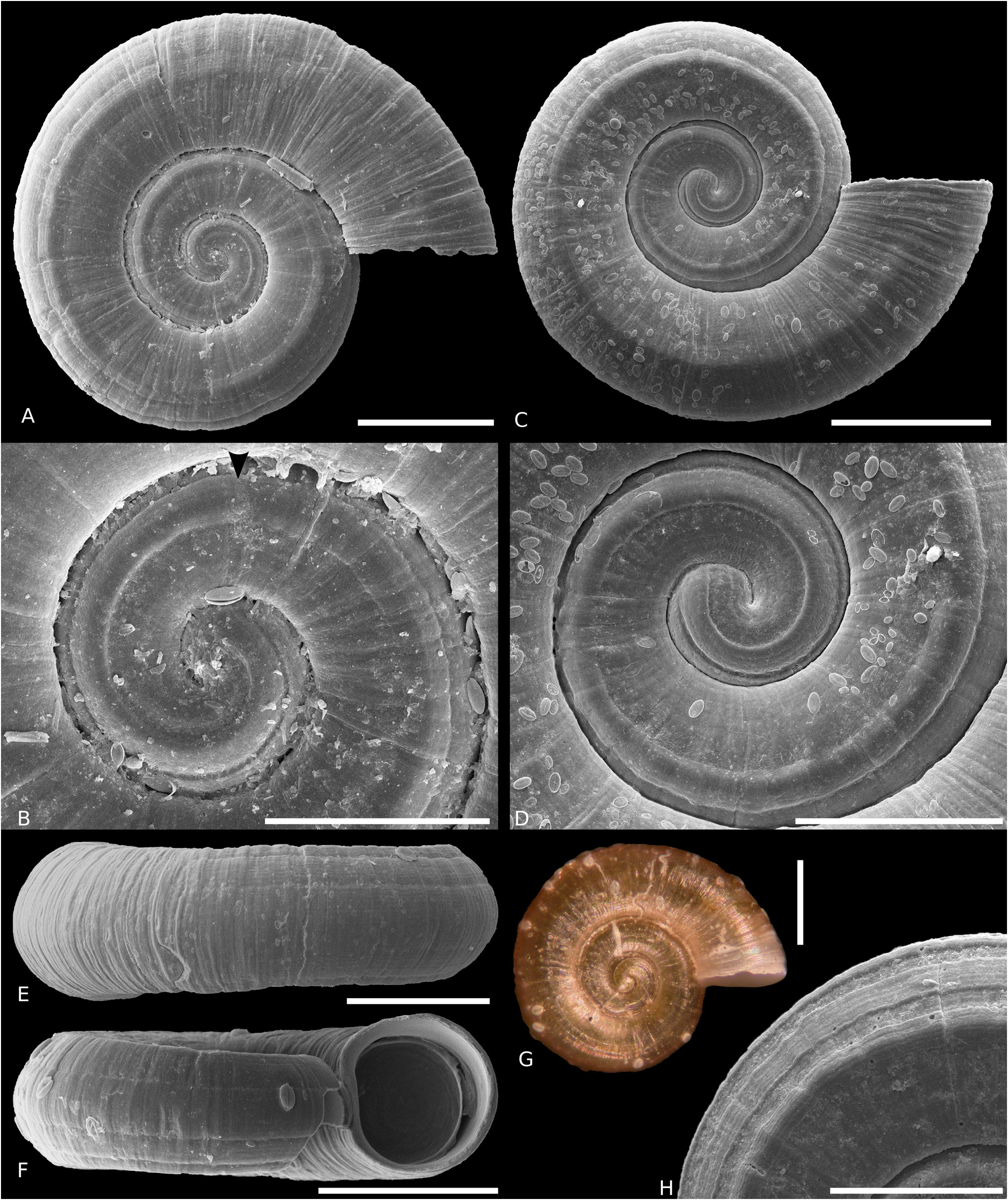