Habitat and distribution. Only known from the type locality. Found in a recess on a vertical wall growing on rock; 9 m.

Description. Thinly encrusting sponge, 3 mm thick, with a minutely ridged and punctate surface. A few small oscules are scattered over the surface of the sponge. Texture is compressible, surface is faintly hispid. Colour in life is bright yellow, colour in ethanol is tan ( Fig. 13A View FIGURE 13 ).

Skeleton. Choanosomal skeleton is loosely plumoreticulate, with delicate, multispicular primary tracts and vague secondary tracts/connections. Bundles of styles protrude through the surface of the sponge, in tufts, points uppermost. There is no special ectosome ( Fig. 13B View FIGURE 13 ).

Etymology. Named after Scott Henderson, who accompanied co-author Cleveland Hickman on numerous trips to the Galápagos from 1983–2016. He assisted Cleve in a variety of roles from local negotiator and logistics organiser, divemaster during harrowing high-current dives, trusted friend and host on his Santa Cruz coffee farm. Of the 149 students Cleve led on 12 Galápagos student field trips, Scott was the only one to make Galápagos his home and life-long conservation project.

Remarks. Dragmacidon hendersoni sp. nov. differs considerably from D. raeae sp. nov. by: live colouration (yellow vs bright red); skeleton (compact plumoreticulate vs loosely plumoreticulate to plumose); texture (firm vs compressible); and the possession of two size categories of styles, with both categories being more slender and sinuous than those of D. raeae sp. nov. It also differs considerably from the previously recorded D. oxeon which has much longer megascleres. It differs from all other tropical/subtropical eastern Pacific species by the lack of oxeas.

Table 4 provides useful details on all known species of Dragmacidon , many of which appear to fall loosely into two groups: those that were previously identified as species of Pseudaxinella Schmidt, 1875 [ D. raeae sp. nov. and other species that form firm dome-shaped sponges, with compact plumoreticulate skeletons that often lack trichodragmata, such as D. australe ( Bergquist, 1970) , D. coccineum ( Keller, 1891) , D. debitusae ( Hooper & Lévi, 1993) ]; and those that have a looser, more plumose skeleton with longer, more sinuous megascleres and often raphides in trichodragmata, resulting in a softer, less firm sponge, such as D. oxeon , D. mutans ( Sarà, 1978) , D. tumidum ( Dendy, 1897) , and D. decipiens ( Wiedenmayer, 1989) . The addition of two species from the Galápagos Archipelago, each of which falls loosely into one or the other group, may lend additional data for future detailed analysis of Dragmacidon , a genus of convenience into which all species commonly previously recorded as Pseudaxinella (a junior synonym of Axinella ), were assigned by Alvarez & Hooper (2002: 734). 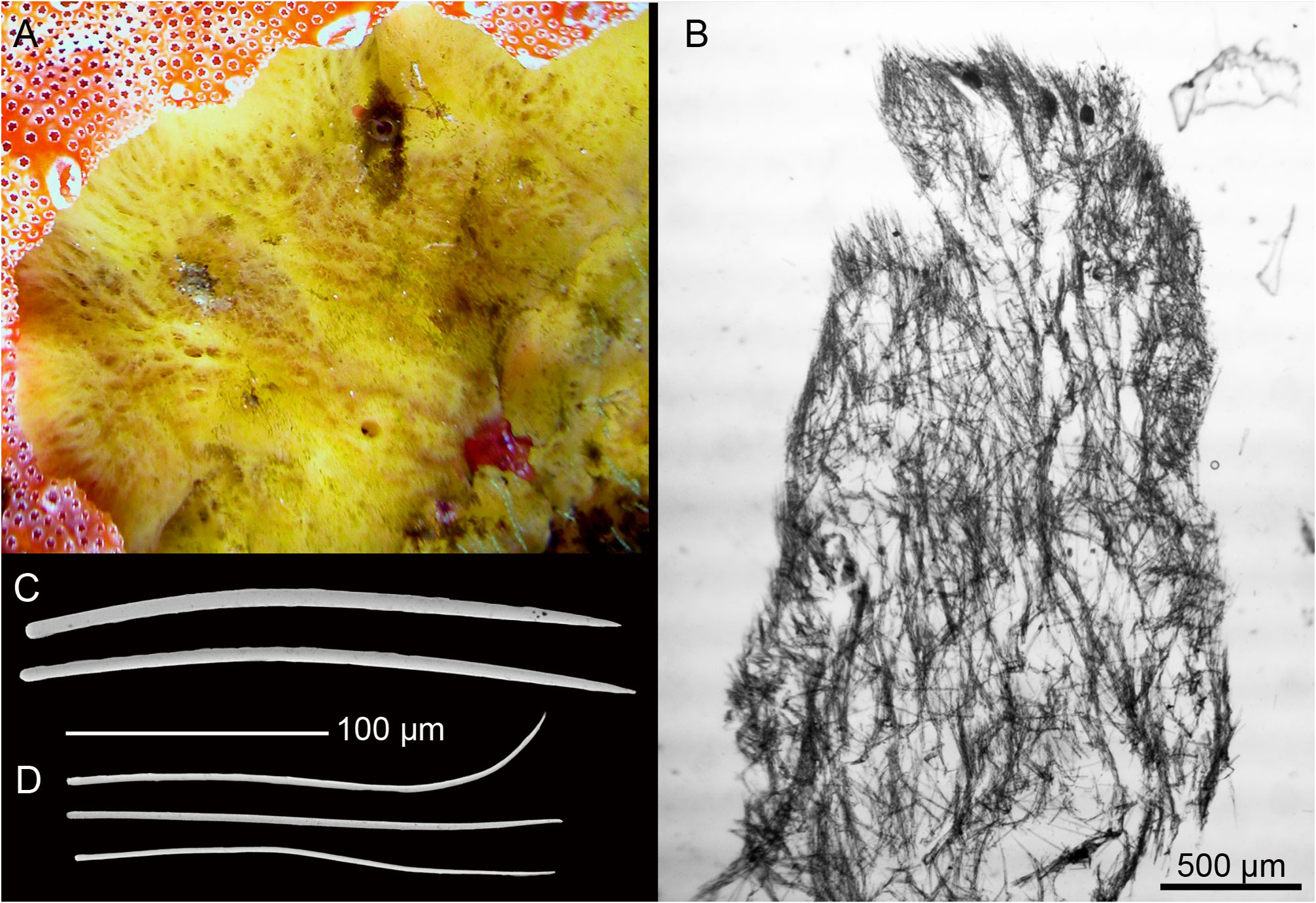