Description. Thickly encrusting to hemispherical sponge, 15 mm thick. Surface densely punctate, velvety to the touch. Small clusters of up to three oscules, each around 1 mm in diameter, are scattered over the sponge, surrounded by prominent asterose drainage canals. Texture is firm, barely compressible, but easily broken. Colour in life is bright red, colour in ethanol is golden brown ( Fig. 12A View FIGURE 12 ).

Skeleton. Choanosomal skeleton is plumoreticulate with clear, wavy multispicular primary tracts, and uni- to paucispicular secondary tracts, irregularly connecting the primary tracts. Tips of styles protrude slightly beyond the surface of the sponge. There is no special ectosome ( Fig. 12C View FIGURE 12 ).

Etymology. Named for co-author Cleveland Hickman’s wife Rae, who accompanied him on numerous research trips to the Galápagos, where she additionally provided support and assistance to the library at the Charles Darwin Research Station.

Remarks. Dragmacidon raeae sp. nov. is relatively unusual for the genus in that it only possesses styles instead of both oxeas and styles. In terms of morphology and skeletal architecture, D. raeae sp. nov. is strongly reminiscent of the southwest Pacific species, Dragmacidon australe ( Bergquist, 1970) , which also forms a bright red cushion, but which has oxeas and a larger size range of megascleres. Three other described species, D. coccineum ( Keller, 1891) , D. fibrosum ( Ridley & Dendy, 1886) and D. tumidum ( Dendy, 1897) , also only possess styles ( Table 4). All other characteristics of D. raeae sp. nov. are typical of some members of the genus (velvety surface, plumoreticulate skeleton, the lack of ectosome, and undifferentiated axial and extra-axial regions).

** combined into a single category

Only one species of Dragmacidon has been previously described from the Galápagos Islands— D. oxeon ( Dickinson, 1945) . Dragmacidon oxeon differs considerably from D. raeae sp. nov. by morphology (it is covered with “hornlike protuberances”) and by the possession of much longer oxeas and styles. Three other species of Dragmacidon have been described from the tropical/subtropical eastern Pacific: D. mexicanum ( De Laubenfels, 1935) and D. ophisclera De Laubenfels, 1935 from California, and D. mutans ( Sarà, 1978) from Chile. All three species differ from D. raeae sp. nov. by the possession of both oxeas and styles ( Table 4).

A new, unnamed species of Dragmacidon was described from the shallow waters of the Colombian Pacific by Lizarazo Rodríguez et al. (2020). This specimen matches D. raeae sp. nov. in colour, texture, morphology, size of styles 302 (152–374) × 19 (9–26) µm, and skeletal morphology. We propose that this specimen is also D. raeae sp. nov., extending the range of the species to include the Colombian Pacific. 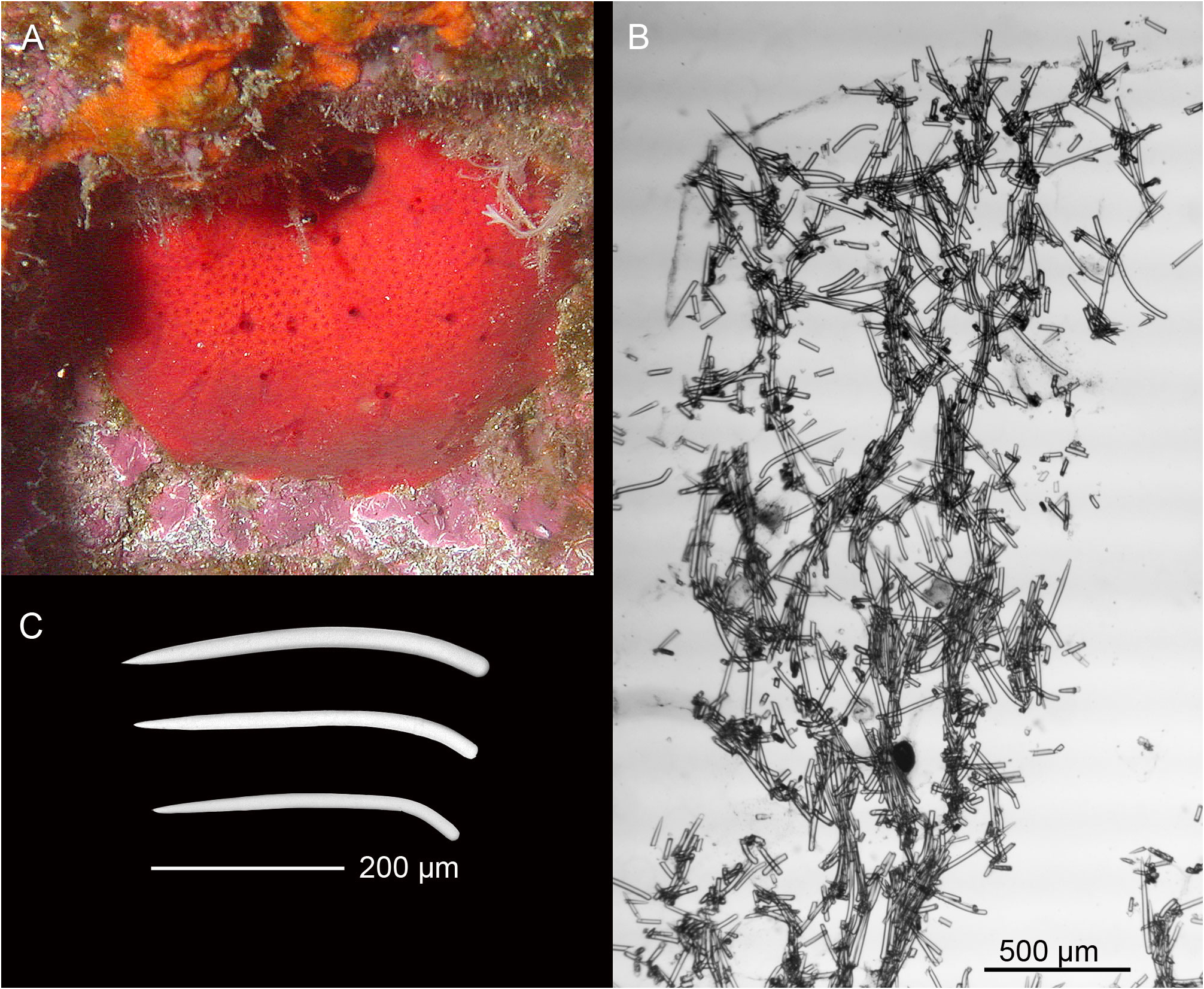