1, sex?, TANZANIA, Mt. Uluguru, Kinola, forêt transit, Berger, Leleup, Debecker ( MRAC 22163), which probably belongs to this species, although it was not directly observed by SEM.

From the Latin erectus = upright, referring to the long and erect setae on the tergites.

HEAD. 1.1 times as long as broad with broadest part behind the middle on a level with the points of lateral protuberances ( Fig. 1A View Fig ). Lateral margins nearly straight. Central rod faint, most distinct in posterior half ( Fig. 1A View Fig ). Frontal branches also faint. Median branches absent. Dorsal surface with setae of different lengths. Cuticle with faint and dense pubescence ( Fig. 1B View Fig ).

ANTENNAE. Left antenna 16 segments, right 14 ( Fig. 1G View Fig ). First segment smallest, following segments about 1.2 times as wide as long. Total number of setae visible in dorsal view: 3 on first segment and 4 on second and third ones. Longest setae of proximal segments about 2.3 times as long as those of distal segments. Average length of setae about 0.3 diameter of the basal segments. One whorl of setae on proximal segments, secondary whorl begins on ventral side of 7 th or 8 th segment. Apical segment globular with several short distal setae. All segments with faint pubescence.

TERGITES ( Figs 1A, 1E View Fig , 7A View Fig ). First tergite rudimentary with eight setae arranged in two groups of four. Second tergite complete; triangular posterior processes with straight margins and glabrous tips, no endswelling ( Fig. 1A, E View Fig ). Margin between projections straight. One marginal seta between apical and inner basal setae. Inner basal setae thick, erect and long, as long as anterolateral seta. Eight posteromarginal setae – apical ones included –, two setae in the medial position – central setae. Five lateromarginal setae on each side, –anterolateral setae included – some of them larger and very erect, alternating with the smaller ones. Anterolateral setae very prominent in all tergites except most posteriors, erect, pointing forwards and protruding from both sides. Second tergite with one anterolateral seta on each side, 3rd and following ones with two. Third tergite with six posteromarginal setae and eight lateromarginal on the right side, four visible on the left side – anterolateral setae included – some larger and very erect, alternating with smaller ones. All tergites with faint pubescence.

CERCI. 3.2 times as long as wide, slightly curved laterally ( Fig. 1I View Fig ). 35-40 setae in dorsal view on each cercus. Setae either short, slightly curved, depressed, clothing all sides, or long straight erect, inserted on outer and ventral sides. Distal half of outer side with 1 or 2 long and erect setae; ventral side with 4-6 erect setae arranged in a longitudinal row ( Fig. 1H View Fig ). Cuticle with faint pubescence. Terminal area conical, 0.1 times of the length of cerci, six-nine transversal striae. Apical seta curved inwards, about as long as terminal area.

Symphylella erecta is very similar to S. simplex ( Hansen, 1903) and S. multisetosa Scheller, 1971 from South Asia. These species differ from all other Symphylella species in the combination of having 8 setae on the first tergite, setae between the apical and inner basal setae of the triangular processes, some of the lateromarginal setae on the second tergite erect and the presence of at least one row of erected setae in the ventral part of the cerci. However, S. erecta is distinguished by the presence of long inner basal setae on the triangular processes of the second tergite, as long as the largest lateromarginal one, strongly reduced first pair of legs and the presence of frontal branches in the head. The presence of the subglobular styli is also a diagnostic feature of this species. 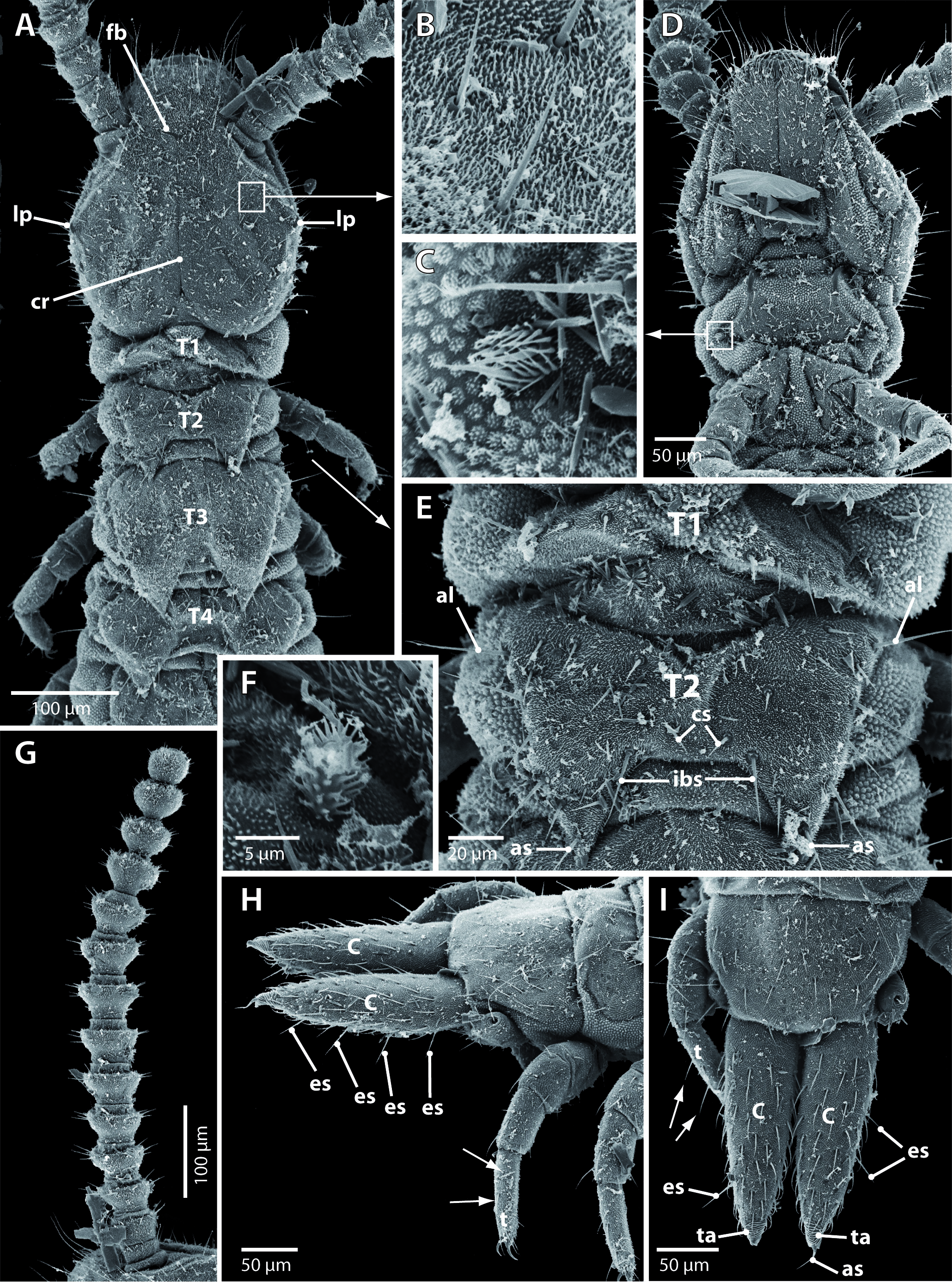 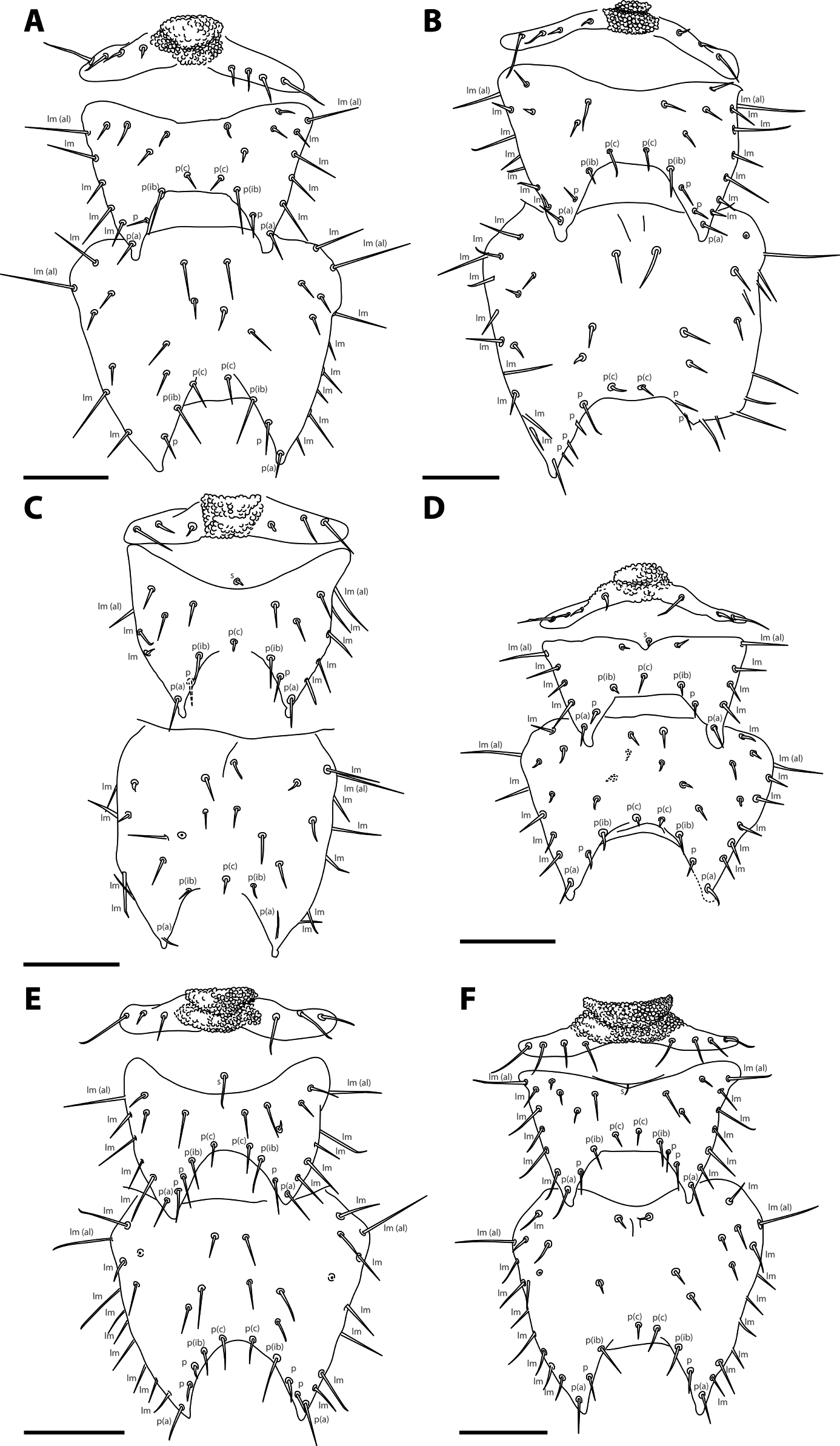